Janhvi Kapoor, while returning from the gym, was surrounded by a small kid selling books who asked her for money. Find out what she did next!

Jo Meri Manzilon Ko Jaati Hai… Tere Naam Ki Koi Sadak Hai Na… Jo Mere Dil Ko Dil Banati Hai… Tere Naam Ki Koi Dhadak Hai Na- whenever we listen to this song, we are reminded of an all-blushy Janhvi Kapoor, looking dreamy in a white lehenga, shyly running away from Ishaan Khatter! It has already been more than a year since Janhvi made her big-screen debut and every appearance of her in varied platforms only makes us want to look forward to the next-best of this 22-year-old star kid. (Do Read: Sara Arfeen Khan Pens Down The Experience Of Her Motherhood Journey With Twins, Zidane And Aizah)

Last year for Janhvi Kapoor had begun with melancholy but ended in sheer bliss. While one side of hers was laden with the grief of parting away from her mother, Sridevi Kapoor, the other side was the ecstasy of formally being introduced as a Bollywood star and reconciliation with her half-siblings, Arjun Kapoor and Anshula Kapoor. It was yesterday, August 13, 2019, when Sridevi would have been celebrating her 56th birthday and for the same, her star daughter, posted a picture of her with a heartfelt wish which could be read as “Happy birthday Mumma, I love you.” Not just this, she also carried out the legacy of her mother by praying at the Tirumala Tirupati temple, donning a South Indian saree-lehenga. Isn’t Janhvi Kapoor a person who seems beautiful inside-out? One look at her and you will realise what a beautiful and humble soul she is! In similar lines, Janhvi came back to Mumbai soon after and once again carried on with her regular life. In an extremely heartfelt gesture, the Takht actress was surrounded by a small kid selling books while returning from her gym session, who asked her for money. Upon noticing the same, Janhvi at once borrowed some cash from her driver and gave it to the people in need! This gesture of hers touched people’s heart, who at once, started showering Janhvi with accolades on the late Sridevi ji’s upbringing. Take a look at the video and the comments below: 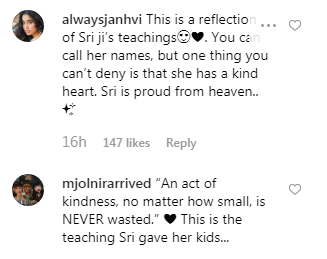 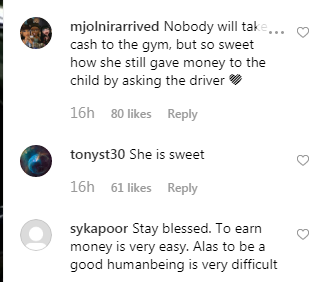 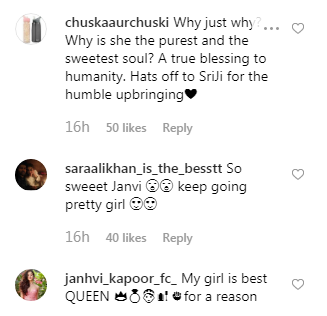 On February 23, 2019, Janhvi Kapoor had taken to Instagram to share a heartfelt note for her mother, Sridevi Kapoor on her first death anniversary. She had posted a monochrome picture of her mother’s hand in her hand, and along with it she had written, “My heart will always be heavy. But I’ll always be smiling because it has you in it.” (Must Read: Shruti Haasan Wishes Father, Kamal Haasan For Completing 60 Glorious Years In The Industry) In one of the interviews, Janhvi Kapoor had expressed her concern upon being compared to her mom, Sridevi in her first film and that would be unfair. She had shared, “I was never worried about it. Mom used to worry about the comparisons because she had done so many films. She used to feel that the audience will compare my first film with her 400 films. As an actor, I have tried to play my character with utmost honesty and sincerity and I didn’t want to act like my Mom. She was always grateful for all the love, appreciation and adulation which she received from so many people. So, I feel that now I have to make them happy.” A few days after Sridevi’s demise, Janhvi Kapoor had written a heartfelt message dedicating to her mom. She had captioned her note as “On my birthday, the only thing I ask of all of you is that you love your parents. Cherish them and devote yourself to making them feel that love. They have made you. And I ask that you remember my mother fondly, pray for her soul to rest in peace. Let the love and adulation you’ll shower on her continue and please know that the biggest part of my mother was the love she shared with papa. And their love is immortal because there was nothing like it in the whole world. Nothing as joyful and pure and no two people as devoted to one another as they were. Please respect that because it hurts to think anyone would ever try to tarnish it.” (Also Read: Taimur Ali Khan Spends A Chilled-Out Afternoon With Mommy, Kareena Kapoor Khan In London) 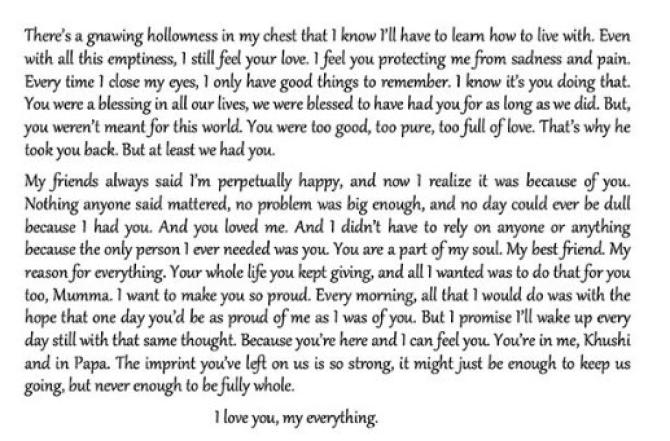 Janhvi Kapoor’s caption had concluded with, “Preserving the sanctity of what they had would mean the world not only to my mother but also to a man who’s entire being revolved around her, and her two children who are all that remains of their love. Me and Khushi have lost our mother but papa has lost his “Jaan”. She was so much more than just an actor or a mother or a wife. She was the ultimate and the best in all these roles. It mattered a great deal to her to give love and to get love. For people to be good and gracious and kind. She didn’t understand frustration or malice or jealousy. So let’s be that. Let’s be full of only good and give only love. That would make her happy, to know that even in death, she gave you all something. The courage and inspiration to fill yourselves with nothing but love and rid yourselves of bitterness in any way and form. That’s what she stood for. Dignity, strength and innocence. Thank you for the love and support everyone has shown us in the past couple of days. It’s given us hope and strength and we can’t thank you all enough.” Janhvi, we love you! How about you, dear readers?