Ishaan Khatter had recently appeared in Anaita Shroff Adjania’s chat show’s second season, 'Feet Up With The Stars'. Read what he revealed about Janhvi Kapoor. 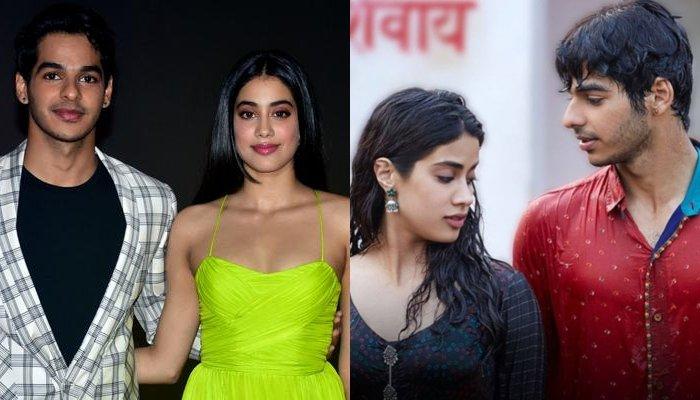 Pehli Baar Hai Ji, Pehli Baar Hai Ji… Iss Qadar Kisi Ki Dhun Sawaar Hai Ji… Jiski Aas Mein Hui Subah Se Dopehar… Sham Ko Usi Ka Intezaar Hai Ji- the moment we heard the tunes of the song, it became our instant favourite and more so, were the co-stars of the much-awaited release of Dhadak, Janhvi Kapoor and Ishaan Khatter. While different people had varied opinions about the film, not a single person failed to talk about their ‘oh-so-awesome’ camaraderie! (Do Read: Katrina Kaif Left Me, Salman Khan Says, Hinting About Their Relationship And Who Broke Up)

Time and again in interviews have we seen these fun co-stars, Janhvi Kapoor and Ishaan Khatter pull each other’s leg and all-praises for each other. In fact, their off-screen chemistry has made people speculate that something ‘more than friends’ surely brims between Janhvi and Ishaan. But every time this duo has brushed aside all rumours and still continues to chill with each other every now and then. When two co-stars work in a film, you get to spend a lot of time with each other and in the process, become aware of each other’s habits. Same was the case for Janhvi and Ishaan.

Ishaan Khatter had recently appeared in Anaita Shroff Adjania’s chat show’s second season, Feet Up With The Stars. When the host of the host asked Ishaan about one of the most annoying habits of Janhvi, this is what the Beyond The Stars actor shared, "She is a mastikhor. She knows which buttons to press. It's irritating because sometimes, she will go on a tangent when it's not required and she will stay on it," further adding that she "fights when she doesn't want to fight".

Recalling the first time Ishaan Khatter and Janhvi Kapoor met and how they broke the ice, the former shared, "The first time we met, we saw La La Land. Because she had not seen it and I had seen it five times. It's such a great film and she hadn't seen it, and I was like ugh. We started our exchange with films. By the time we got on set, we were bum chums.” (Must Read: Anita Hassnandani And Rohit Reddy's Sizzling Pictures From Vietnam Are Pure Love, Check Inside)

Dhadak was Janhvi Kapoor’s first film in Bollywood, along with her co-star, Ishaan Khatter. Their fantabulous chemistry had been widely discussed in media. So much so, that for once people even thought that there are high chances of Janhvi and Ishaan dating each other. Although the Takht actress has always outwardly denied any sort of love-thingy going on between the duo, Karan Johar and Arjun Kapoor didn’t cease to pull Janhvi’s leg at Koffee With Karan season 6. Speaking about Ishaan, Arjun had stated, “Well, he is always around her” and further shared, “No, no, because he jumps off buildings”, to which Janhvi had retorted, “(he was) just trying some stunts”, to which her half-brother stated, “To woo you!", Post which, an irritated Janhvi replied, “Whose team are you on?"

Speaking about her once co-star, Ishaan Khatter in an interview with the Hindustan Times, Janhvi Kapoor had shared, “Till now, he is the only person I have worked with, and it was easy to team up with him because I think we get along really well. Also, as an actor, I am in awe of him and the way he approaches his scenes. Plus, he has great energy [as an actor], and it is probably because he is new too. But what helped me a lot was the fact that he is {a} more experienced {actor} than me.” (Also Read: Priyank Sharma Unfollows GF Benafsha Soonawalla Because Of Another Famous Actress? Details Inside)

This is so sweet! We love Janhvi Kapoor and Ishaan Khatter and would love to see them getting paired soon!