Janhvi Kapoor Twins With Her Sister, Khushi Kapoor And Gets A Matching Evil Eye Tattoo On Her Wrist

Janhvi Kapoor Twins With Her Sister, Khushi Kapoor And Gets A Matching Evil Eye Tattoo On Her Wrist

During her recent trip to New York to meet Khushi Kapoor, Janhvi Kapoor had revealed her baby sister’s new tattoo, which is a little evil eye on the inside of her left wrist. Gone are the days when getting a tattoo was an uncommon phenomenon. Nowadays, getting inked is a great way of self-expression and painting your body canvas with memories and what you believe in; a tattoo is what remains with you to cherish for a lifetime. While some ink their passion, some showcase their love for their closed ones, be it parents or children, and some twin with their sisters or friends or bae by getting the same tattoo. Belonging from the latter category are the Kapoor sisters, Janhvi Kapoor and Khushi Kapoor, who gave us major goals with their twinning tattoo. (Also Read: Kareena Kapoor Khan Reveals The Reason Behind Marrying Saif, Says It Is Not A Crime To Fall In Love)

Daughters of Boney Kapoor and Sridevi, Janhvi Kapoor and Khushi Kapoor totally abide by the saying, 'sisters before misters'! Even before Janhvi embarked on her journey to fame and the talks of her younger sister, Khushi making her Bollywood debut, the Kapoor sisters were often spotted with their parents, Boney and Sridevi at B-town events and parties. Since now, Khushi had moved to New York for her studies, Janhvi makes sure to take out time from her professional commitments and spend it with her sister. 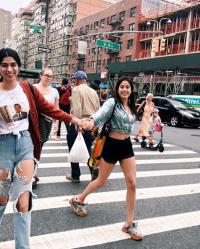 During her recent trip to New York to meet Khushi Kapoor, Janhvi Kapoor had taken to her Instagram to reveal her baby sister’s new tattoo, which is a little evil eye on the inside of her left wrist. She had shared pictures of beaming Khushi from the tattoo parlour and had captioned them as “God help us” and "Paranoid much?" Even though Janhvi had revealed that she is “too chicken to get inked”, looks like she finally gathered the courage to get one and the exact same as her sister. On December 4, 2019, Janhvi had stepped out for a Benetton event in Mumbai, and we couldn’t help but notice her simple evil eye tattoo, just like her sister, Khushi! 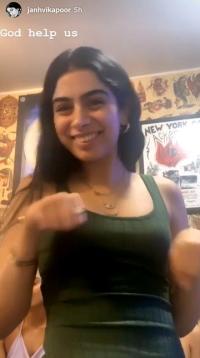 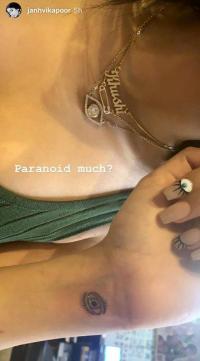 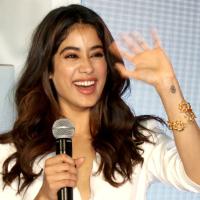 While the evil eye tattoo is the first one for Janhvi Kapoor, Khushi Kapoor is not a newbie when it comes to getting inked. On Colors Infinity’s BFFs With Vogue season 3, Khushi had revealed that she has a thing for the tattoos and already has three tattoos in total, on her body. One tattoo comprises of all her family’s birthdays in Roman numerals, the second is of her bestie’s name and the third one is on her lower back which makes her extremely embarrassing because it reads, ‘Khud ki raah banao’! (Also Read: Arjun Kapoor's Sister, Anshula Cannot Stop Praising His Acting Skills In The Latest Film, 'Panipat') 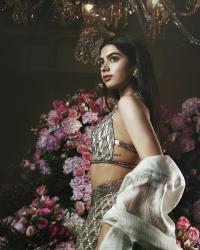 Not just this, the Kapoor sisters, Janhvi Kapoor and Khushi Kapoor had also revealed that their mother, Sridevi Kapoor didn’t approve much of their decision of inking their bodies. But what are Janhvi’s views about getting inked? She had admitted on the show that she is “too chicken to get inked” but she will ensure that her future husband will get himself inked with the words ‘Property of JK’, whenever they will or will be about to get married! While Janhvi had said that jovially, but it surely makes us imagine what an adorably possessive wifey, she will make!

On November 5, 2019, when Khushi Kapoor had turned 19, Janhvi Kapoor had posted some hidden gems of her special moments with the birthday girl. Be it Khushi’s diva-mode pictures, her goofy captures, a video of her taking Janhvi on a piggyback ride or the one where the sisters are singing the ‘Happy Birthday’ song, Janhvi’s wish for Khushi spelt a whole lotta love. Janhvi had captioned her post as “I’m so proud of you. You’re my lifeline. Happy birthday I miss you so much” followed by hearts. (swipe right)

In an interaction with Anaita Shroff Adajania on her chat show, Feet Up With The Stars, Janhvi Kapoor had confirmed that her star sister, Khushi Kapoor will be joining the New York Film Academy (NYFA) as she has finalised to have a career in acting. Khushi, after putting a lot of thought between going for a career in acting or modelling, has finally figured out her penchant. Her sister, Janhvi had shared, “She is going to NYFA. Then after she comes back, she will figure what she wants to do.” Janhvi and Khushi's papa, Boney Kapoor was a bit hesitant of the latter's decision to move away from them. The Gunjan Saxena star had stated, “I’m getting palpitations just thinking about Khushi going to... He (Boney) just has to think about it and he’ll start crying.” (Also Read: Sunny Leone And Daughter, Nisha's Latest 'Mother-Daughter' Moment Is Too Adorable To Miss) 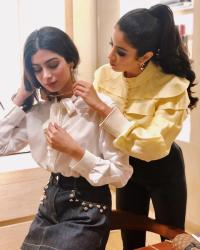 Janhvi and Khushi’s evil eye tattoos are a great idea to take inspiration from!