In an appreciation post for his 'bade miyaan', Ishaan shared an unseen childhood picture of both of them! Scroll down to check it out! 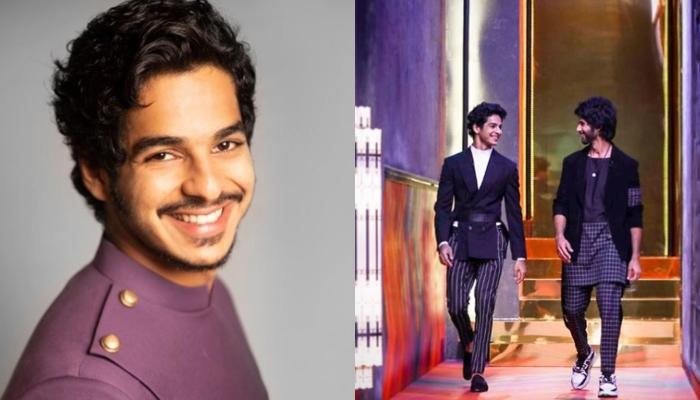 One of Bollywood's most favourite brother duo, Shahid Kapoor and Ishaan Khatter share a great and fun rapport with each other. Remember that episode of Koffee With Karan when Shahid and Ishaan's chemistry on the coffee couch had made us ROFL throughout the episode! The two have an uncanny resemblance and share a crazy love for dance. In an appreciation post for his 'bade miyaan', Ishaan reflected what does Shahid's presence means for him in his life, and shared an unseen childhood picture of both of them! Scroll down to check it out! (Recommended Read: Anisha Padukone's Birthday Wish For Her 'Jiju', Ranveer Singh Is As Hilarious As The Man Himself)

Did you know Shahid Kapoor had danced with joy when Ishaan Khatter was born? Yes, once in a conversation with Pinkvilla, Neelima Azim had recalled Shahid doing a full mad dance after knowing that he is blessed with a baby brother. She had said, "After Ishaan was born, Shahid came to Yari Road where we used to stay, and went to the next gully where he played with his friends and did a full mad dance. He was so happy." Shahid has always been a protective brother for Ishaan, guiding him with right and wrong. Although Shahid and Ishaan are half-brothers as they both are born to Neelima Azim, this fact does not adhere to their bond in any way. 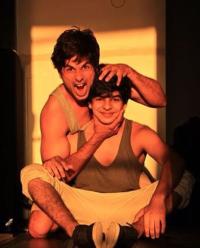 Ishaan Khatter took to his IG handle on July 6, 2020, and shared two pictures of him with his elder brother, Shahid Kapoor on his IG stories. In one of the pictures, Shahid and Ishaan can be seen on a stage, while Shahid was looking extremely handsome in a black tux, Ishaan rocked the 'boy-next-door' look. Ishaan wrote a sweet message atop the picture which can read as "Bhai, who has shown me by example the value of perseverance, hard work and patience." Another picture that Ishaan posted was a blast from the past. In the picture, baby Ishaan can be seen sitting in the lap of his bhaiya, Shahid, while he's busy reading a newspaper. Ishan wrote, "My pillar to lean on" atop it. Check out the pictures below: 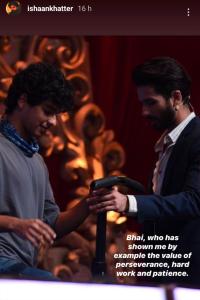 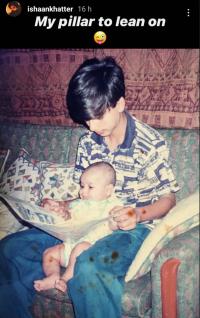 Once in an interview with Pinkvilla, Shahid and Ishaan's mother, Neelima Azim had revealed how Shahid had pestered her to have a child again, and specifically a brother. She had said, "It was Shahid who wanted me to have a child again. He was 14 and we (she and Rajesh Khatter) were well settled with our lives. I was happily working and the thought of having a baby again never crossed my mind. But Shahid specifically wanted a brother. I have my own brother so I knew what he meant. You can get married and have partners but your brother is the only one with your DNA after your parents aren't there with you. So I remember I wanted a girl and I couldn't have promised Shahid a brother. But my doctor, after Ishaan was born, didn't congratulate us first. She said, "Congratulations to Shahid. He's got his baby brother." Talking about Shahid and Ishaan's bond, she had revealed in the same interview that Shahid has always looked after Ishaan like his own child. She had said, "I have several photos of them sitting and reading newspapers. So Shahid had a mini Shahid in his lap." She further added, "Shahid was a huge help in case of Ishaan. He's not only his biggest inspiration and motivation but I know it for a fact that Ishaan loves me because I'm his mother but he loves Shahid equally." (Also Read: Rangoli Chandel Pens A Guru Purnima Wish For Her 'Little Guru', Kangana Ranaut)

In an interactive session with India Film Project, Ishaan had revealed the best advice that he had received from his brother, Shahid and had stated, "My brother (Shahid Kapoor) once told me that the moment between action and cut is yours, everything else is secondary. He said find that honest moment and, while everything else could help, finding your honest moment will let you live it in front of the camera." (You May Also Like: Ayushmann Khurrana And His Brother, Aparshkati Khurana Plays 'Aao Milo' With A Cute Twist)