Isha Ambani Piramal recently donned a lacy, lilac saree and a diamond kamarbandh which was a complete show-stealer for a family wedding. 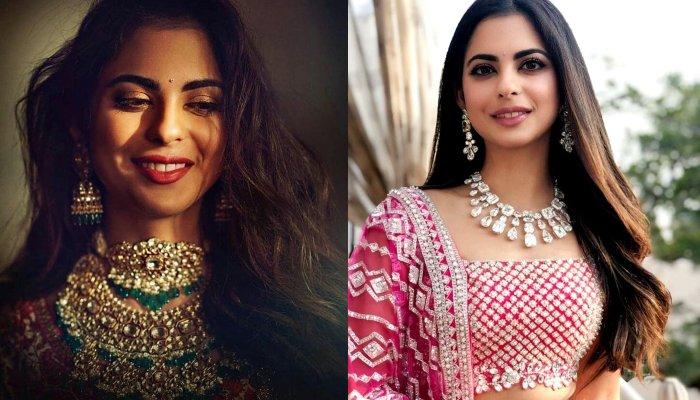 While the arrival of winter means that you get to gorge on delicacies, flaunt those amazing blazers and sweaters that you have or hide beneath those huge boyfriend sweatshirts (*wink*), the onset of this season of ‘coldness’ is also a reminder of the array of weddings that follows! While the very thought of an all decked-up you enthral you to the fullest, but the very thought of ‘what am I going to wear?’ drives most of us crazy. But all thanks to our favourite celebs, who time and again give us clues of what to don at weddings or similar occasions and make heads turn like they do. And the latest celeb to join the bandwagon of ‘rocking at weddings’ is none other than the gorgeous Isha Ambani Piramal. (Do Read: Sonali Bendre Shares Her And Goldie Behl's 'Before-After Cancer' Transformation On 17th Anniversary)

It was on December 12, 2018, when Isha Ambani had added a ‘Piramal’ to her surname when she got married to Anand Piramal. The billionaire heiress, who dons lehenga better than none, had looked up to celebrity designer duo, Abu Jani Sandeep Khosla for her wedding ensemble. While she had rocked in the ivory lehenga, we really loved how Isha had included her mother, Nita Ambani's wedding saree as a major part of her wedding attire. Isha had worn her mother, Nita's 35-year-old red wedding saree, as her dupatta (as you can see it in the picture), with her main ivory wedding ensemble done by designer duo, Abu Jani Sandeep Khosla. Here’s a picture of the beauty: 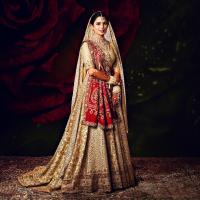 With another wedding in the family, it is Isha Ambani Piramal’s saree/lehenga looks that we are eagerly looking forward to. Designer duo, Abu Jani Sandeep Khosla’s Instagram page contained ethereal pictures of Isha as she donned a lacy, lilac saree, with her hair left loose, minimal diamond jewellery and what looked like an exquisite diamond kamarbandh, which was a complete show-stealer. Her pictures were captioned as “The Ethereal Isha Ambani Piramal in a custom hand-embroidered French lace sari by Abu Jani Sandeep Khosla.” What looked like from her get-up and pictures, Isha had decked-up for her cousin, Nayantara Kothari’s yet another pre-wedding bash. 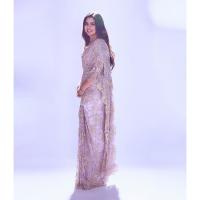 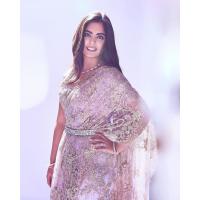 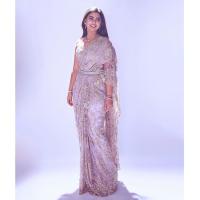 Doesn’t she look beautiful? The ladies of the Ambani family have been a huge fan of Abu Jani Sandeep Khosla’s work. Soon after Isha Ambani’s wedding, the designer duo had taken to their Instagram page and had revealed every ounce of detail about her wedding outfit and her mother’s lehenga for the day. The same could be read as “AN ETERNAL ROMANCE. Nita Ambani wears a light beige georgette ghagra hand embroidered in the finest chikankari, mukaish and marodi work highlighted with crystals, tamba sequins and edged with fuchsia pink borders. A gold blouse is hand embroidered in the most intricate zardozi with crystals and a shoulder dupatta to match. A pink tulle head dupatta in sequins jaali with borders complete the ensemble.” (Also Read: Farhan Akhtar And Shibani Dandekar To Take Their Relationship To Next Level, Tying The Knot In 2020?) 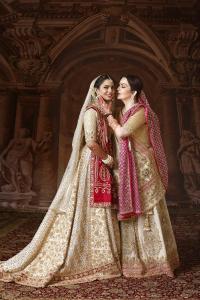 For Isha Ambani Piramal’s wedding lehenga, Abu Jani Sandeep Khosla had described, “AN ETERNAL ROMANCE: Abu Jani Sandeep Khosla for Isha Ambani @_iiishmagish Isha Ambani wore a 16-panelled ghagra in 2 shades of off-white that features a trail. Each panel is hand embroidered. Mughal Jaalis and floral panels alternate in the finest zardozi, vasli, mukaish and nakshi work. Every flower or jaali is highlighted with Crystals and sequins. Red or vermilion the iconic bridal hue features in the zardozi borders, lending an auspiciousness to the ensemble.” 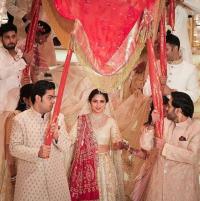 To mark 33 years of Abu Jani Sandeep Khosla, the designer duo had posted many a throwback, million-dollar pictures of many important starry events and had revealed the significances of those outfits. On August 21, 2019, Abu Jani and Sandeep Khosla had shared an unseen picture of Nita Ambani and Isha Ambani, looking ethereal in their traditional best. The description on their look could be read as “2007: Gota, a gift from Rajasthan! Gota is a woven metallic ribbon that is crafted with gold or silver wire thread and silk or cotton thread. It is made in Rajasthan and was formerly used mainly as borders and finishes and also as flowers and dots on many north Indian royal outfits. It has been a constant in Abu Sandeep's work over the years and they have kept reinventing its usage on fabric with much success.” 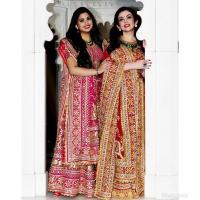 The note by Abu Jani Sandeep Khosla could be further read as “Here's Nita Ambani and Isha in Bali Gota for Abu Jani Sandeep Khosla's India Fantastique. Their ensembles have multiple borders on the ghagra and dupatta featuring beautiful floral bael motifs. Nita’s ghagra is finished with a peacock Zardozi border, while Isha’s ensemble displays the radiance of a real gold Kuran lace border. An avid aficionado of their work, Nita says - "For me, Abu and Sandeep are the epitome of Indian couture, perfecting the art of beautiful dressmaking and intricate designing. My family and I have been fortunate to have the honour to wear their designs and to share a close bond with the duo." #33YearsOfAJSK.” (Must Read: Alia Bhatt's Sister, Shaheen Bhatt Posts A Grumpy Pic Of Alia, Calls Her A Happy Little Flower) 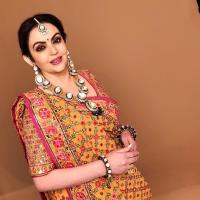 Isha Ambani’s wedding preparations had started off with a fun dandiya night, which was thriving with life and colours. For the same, Isha and her mommy, Nita ji had donned colourful lehengas by AJSK. The details of the outfits were shared by the designers themselves who had mentioned, “FOLKSY & FABULOUS! @_iiishmagish Isha Ambani wears Tharad by Abu Jani Sandeep Khosla Couture. #BrideToBe #Gujarat #handembroidered #CustomCouture” And Nita ji’s handcrafted heritage look as “RADIANCE PERSONIFIED. Nita Ambani is a vision in Abu Jani Sandeep Khosla Couture. #Handcrafted #Heritage #NitaAmbani.” 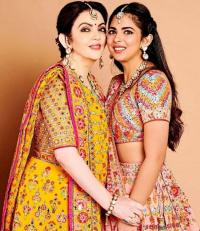 Guys, how did you like Isha Ambani Piramal’s lilac lace saree by Abu Jani Sandeep Khosla? Keep us posted!