Aamir Khan's daughter, Ira Khan's social media PDA with her 'person', Nupur Shikhare is too adorable to be missed!

Who is your person? Someone, who can understand you and be weird and sane with you or maybe someone, who can make you laugh and irritate at the same time. Well, the definition of ‘my person’ is different to everyone and Aamir Khan’s daughter, Ira Khan tried to know the same. The star kid asked her followers about their kind of person and her boyfriend, Nupur Shikare’s response won everyone’s heart.

Also Read: Raj Kundra Wishes Viaan Raj Kundra On 9th Birthday With A Video Of Precious Moments Since His Birth

In 2020, Ira was rumoured to be dating her fitness coach, Nupur Shikhare and their respective social media handles were proof of their budding romance. In February 2021, Ira had made her relationship with Nupur Insta-official on Promise Day. Sharing some adorable pictures with the love of her life, Ira had captioned them as "It's an honour to make promises with and to you. #hi #whaleyoubemine #myvalentine #buddy #yourebetteratcheesylines #dreamboy." Well, Ira Khan and Nupur Shikhare’s mushy PDA moment started with the star kid posting a video of her beau on her IG stories. In the video, Nupur can be seen arranging fairy lights as he enjoyed the moment and Ira started a Q&A session and asked her fans, “Do you think you can have someone who's your person?" Soon after, Nupur replied to her with a sweet message as he wrote, "I already have, Her name is Ira" followed by a red heart emoji. This surely made Ira feels butterfly in her stomach as she re-shared her beau’s response on her IG stories and wrote, “Awwliiieee” atop it. 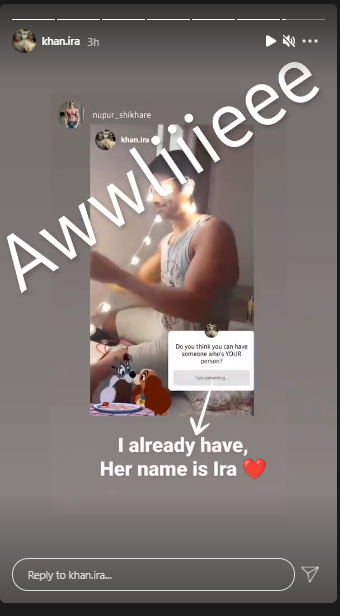 On May 8, 2021, Ira Khan had turned a year older and her beau, Nupur Shikhare had taken to his IG handle to wish his ladylove. He had shared two pictures of his love, Ira, on her birthday. The first picture had featured a toddler Ira looking at the camera with bewildered eyes. The second picture was a recent one, where Ira could be seen playing with her pooch. Nupur had penned a sweet birthday wish alongside the pictures, which could be read as "Hi @khan.ira. Happy Birthday My Love.. There so much that I would like to say, but I am going to keep it simple .. I love you. #birthday #love #bubs."

Recommended Read: Maniesh Paul Reveals How His Wife, Sanyukta Paul Took Care Of Finances When He Was Jobless 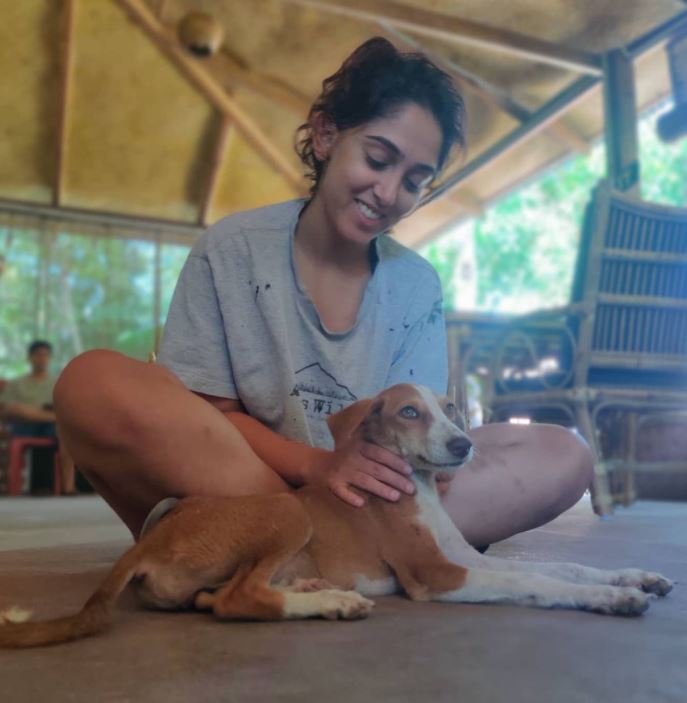 On March 9, 2021, Ira Khan had taken to her IG stories to share a cute picture with her bae, Nupur Shikhare. In the picture, Ira was seen giving a haircut to her boyfriend, Nupur but was distracted by her phone. On the other hand, Nupur had clicked a mirror selfie with Ira, who had a scissor in one hand, while checking her phone from another. Atop the picture, Nupur had written, “Distractions I tell you! Focus @Khan.ira.” But Ira had soon deleted her post. On April 9, 2021, Ira Khan had taken to her IG stories and had shared a sketch of her, made by her talented beau, Nupur Shikhare. Sharing the sketch, Ira had appreciated Nupur’s artistic skills and had written, “How?! You've only drawn twice in your life! That's so good!” atop it. Nupur had reshared it on his IG stories along with a heart and hug emoticon. Ira has indeed found her 'person' in Nupur Shikhare!