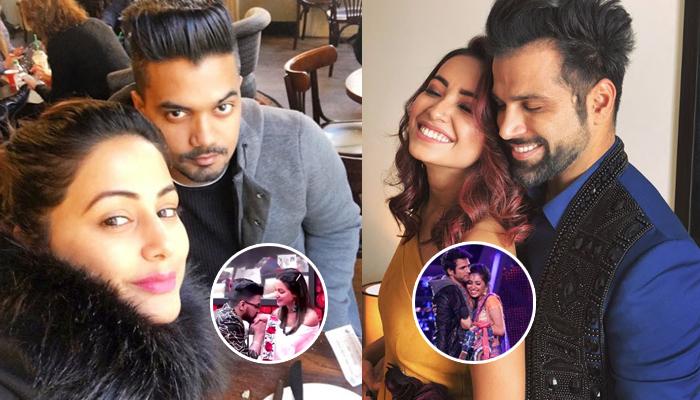 For anyone who is a die-hard romantic at heart, a grand wedding proposal is totally the dream come true. And there actually are some lucky ones, who were asked out by their partners in a truly spectacular manner. Well, some of them are our very favourite TV stars, whose partners proposed to them in front of the entire nation on television.

Wondering who are the lucky ones? Here goes the list of television celebs who proposed to their partners on national television!

This lovely jodi from the telly world participated in season 5 of Nach Baliye, where Ravi surprised Sargun with a dream proposal. After their performance got over, he went down on his knees in front of his ladylove, and proposed to her with a solitaire. Later, talking about how he found the perfect ring for Sargun and her reaction, he said:

"Finding the perfect ring for her was a task. Sargun was shell shocked. She had no clue about it. She was happy, dumbfounded, tongue tied. I will always remember her expression."

And that’s not all! Ravi even managed to get both of their families on this important occasion. While interacting with media, he explained how he managed everything:

"I decided all this in a very limited span of time. First I arranged for Sargun's mom to come to Mumbai, who, in turn convinced her dad to also come along. Then I put them in a hotel. Arranging for all this with Sargun being around me 24x7 for the rehearsals wasn't easy as Sargun is extremely sharp. To pull it through was a task in itself."

Following the footsteps of Ravi Dubey, TV actor Rithvik Dhanjani too, proposed to his ladylove Asha Negi, on the sets of Nach Baliye. The two participated in season 6 of the dance reality show, where the actor went down on his knees and sang a song for her.

In the very next episode after he proposed to her, Asha gifted Rithvik a guitar which had a collage of their pictures on it. She even thanked him for his heartfelt gesture.

Here’s a video of that adorable moment between the two:

The two won the show and their relationship is still going strong.

#3. Upen Patel and Karishma Tanna got engaged in 'Nach Baliye 7'

Upen and Karishma came closer to each other when they participated in Bigg Boss 8. After Bigg Boss, they were one of the contending jodis in Nach Baliye 7. Unlike Ravi and Rithvik who simply proposed to their sweethearts in the previous seasons of Nach Baliye, Upen went a step ahead and got engaged to Karishma on the sets of the show.

It was a dreamlike set-up planned by Upen that swept Karishma off her feet. He asked the judges for a few moments and asked Karishma to close her eyes. And when she opened her eyes, everyone in the audience was holding the placards saying “Marry me?” Then came a few little girls on the stage who were holding the “Please marry him” placards. Then he went down on his knees and the two exchanged rings. All this happened in the presence of Karishma’s mother and sister on the show, while Upen’s entire family was present through online video chat.

Here’s one video which gives a few glimpses of this dreamy affair:

While everything was hunky-dory in this couple’s life and even the fans were waiting for the two to announce their wedding date, they left everyone shocked by their breakup news in 2016.

They made one of the most admired couples from the television industry, and were looked upon as an inspiration by many young lovebirds. Sadly, this beautiful relationship came to an end after six long years for the reasons best known to the couple itself. But before Sushant and Ankita broke up, their fairy tale-like love story saw many awe-inspiring moments, one of which was when Sushant proposed to Ankita on Jhalak Dikhhla Jaa. It was Valentine’s Day special feature of the show where the actor proposed to the love of his life for marriage, and she said yes.

Sigh, those good ol’ days! While Sushant and Ankita are no longer together, here’s that video which once made us feel so good about these two:

#5. Sara Khan and Ali Merchant got married in 'Bigg Boss 4'

Another Indian television show which has proved to be a great platform for many to express their feelings to their loved ones is none other than the reality show Bigg Boss. The one to start a trend in this house was season 4’s contestant Ali Merchant, who proposed to actress Sara Khan (who was also a contestant in the same season of the show) for marriage and she agreed. They got married in the show itself, but their bond did not last even for two months! In fact, a lot of reports even claimed at the time of their separation that it was just a publicity stunt for which, they were paid a whopping amount of Rs. 50 lakhs by the makers of the show.

#6. Danish Khan proposed to Mahek Chahal in the finale of 'Bigg Boss 5'

It was the finale of Bigg Boss 5, where Mahek Chahal’s childhood friend and (then) boyfriend of four years, Danish Khan, proposed to her with a ring. While Mahek accepted his proposal during the show, some time later they broke up quoting compatibility issues as the reason behind their split.

#7. Monalisa and Vikrant Singh Rajpoot got married in 'Bigg Boss 10'

Latest in the series of proposals in the Bigg Boss house (and even national television) so far include Bhojpuri actor Vikrant Singh Rajput’s proposal to girlfriend Monalisa, who is also an actress in the Bhojpuri film industry. Monalisa was a contestant in Bigg Boss 10, where Vikrant was granted an entry to propose to her for marriage. As the actress said a 'yes' to his proposal, the two had an extensive wedding celebrations on the show.

From mehendi and sangeet to the wedding ceremony, they had it all in front of the entire nation. When the two announced their wedding, it was strongly believed that just like Sara and Ali, even their marriage is a publicity stunt and won’t last long. Monalisa and Vikrant got married in January 2017, and their relationship is still going strong. They even participated in season 8 of Nach Baliye and after their elimination from the show, they had their much-awaited honeymoon in Goa.

One of the cutest couples from the telly Ville, Abigail Pandey and Sanam Johar took their relationship ahead on the stage of a reality show. Well, the couple enthralled everyone with their outstanding performances and then one fine day Abigail went down on her knees and proposed her boyfriend Sanam. Yes, in their case it was Abigail who proposed him. Sanam was totally surprised and got emotional. The two then exchanged rings on the sets and made everyone emotional.

Sasural Simar Ka fame actors Dipika Kakar and Shoaib Ibrahim are one sizzling television couple who walked down the aisle in February 2018. Everyone knew that both Dipika and Shoaib have been dating, but when the proposal happened on the sets of Nach Baliye, it made everything crystal clear. Shoaib proposed Dipika in a dreamy and romantic style in every sense.

Shoaib is completely smitten by Dipika and was once quoted as saying:

#10. Gurmeet Choudhary and Debina Bonerjee on ‘Pati Patni Aur Who’

Debina Bonerjee and Gurmeet Choudhary were in a relationship of 5 years already when on the famous reality show, Pati Patni Aur Who, the latter proposed the former. The actor proposed Debina on the show with a big diamond ring, which made Debina completely speechless and needless to say, super-happy without a doubt.

In an interview, Debina said:

“At that time, I did not know what was going in Gurmeet’s mind. So, when he came to me with a ring; I was shocked. I wasn’t prepared at all for such big surprise. He had done his homework very well and I did not know how to react at that time. But honestly, that moment of my life still brings tears in my eyes. Those memories will be cherished for a life time.”

Yeh Rishta Kya Kehlata Hai fame Hina Khan has always been under the scanner for her love life with Rocky Jaiswal. Initially, the two of them didn’t accept their relationship, but soon after Hina went inside the house something big was awaiting all her fans. Well, Hina’s boyfriend Rocky came inside the house during a task and he proposed Hina on the national television. Hina took him to the bedroom, where they had a heart-to-heart conversation and Rocky proposed to her. He said:

Recommended Read: 24 'Nach Baliye' Jodis Who Separated After Appearing On The Show As A Much-In-Love Couple

We are sure that all those filmy style proposals just made you a bit jealous, didn’t they? Well, then why don’t you drop some hints to your partner by sharing this list with them!