Some stories have the power to light up a dull day, and if they are the stories about true love and living ‘happily-ever-after’, then we would sure want to read them.

This is the story of 99-year old Jeram Ravji and Ganga Ravji, who live in Auckland, New Zealand and have been married for 81 years now.

Jeram and Ganga were betrothed at the age of six in India, and married at the age of 19. Having an age difference of just a month, they will be celebrating their 100th birthday this year.

Do Read: 'Saturday Saturday' Singer Akriti Kakar All Set To Get Hitched On March 5 To Boyfriend Chirag Arora

In their life together spanning 81 years now, they have been a part of India’s independence struggle. Jeram was even imprisoned for 10 months after joining Mahatma Gandhi’s freedom struggle. And during this time, Ganga was beaten up for regularly asking about her husband.

Also See: 'Atmia', Jai And Sunitha's Surreal Love Story That Will Move Anyone To Tears

They have been awarded by the Family First NZ, a Christian lobby group in Auckland for being the couple who have been married for the longest time. According to Family First New Zealand Director Bob McCoskrie:

“Although we can only go on the nominations made, we are pretty sure that the Ravjis are New Zealand’s longest-married couple. As part of their award from Family First NZ, they will have a professional photo sitting with their extended family which includes 6 children, 15 grandchildren and 25 great- grandchildren all living in Auckland. The last family photo was 10 years ago at their 90th birthday celebrations.”

Their family includes six children, 15 grandchildren, and 25 great-grandchildren. Jeram first shifted to New Zealand in 1928, five years after he was betrothed. After their wedding in 1935, they lived as a family in Whanganui before shifting to Auckland in 1981. 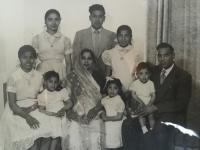 They will celebrate their 81st wedding anniversary in two months. Asked about the key to a happy marriage, Ganga said:

“(The advice) we would give to our children if they had difficulties with their marriage would be you have to work hard, you have to have tolerance - that’s the most important part, tolerance.”

Although they were a part of India’s freedom struggle, yet they are waiting to receive their letter from the Queen on their birthday.

Recommended Read: This Haryana Bride Asked Her Groom To Fund The Education Of Eleven Girls And Made It The Eighth Vow

The Ravjis are an example of how there is always a happily ever after. All you have to do is believe in each other. They have been together for long, and are still in love with each other as they were before. This is one couple from whom we youngsters can take inspiration. Team BollywoodShaadis wishes this couple to live together for many more years to come.