On the occasion of Daughter's Day, Kunal Kemmu shared an adorable picture with his little sunshine, Inaaya Naumi Kemmu. Check it out!

For the world, you might be a simple woman, but for your 'daddy dearest', you are always going to be his princess. A father is the only one, who knows you 'can' achive all your dreams, even on days when your mom couldn't. He is the one, who encourages you to set goals and makes sure that you reach your goals. He is the one, who knows how to make you laugh on a gloomy day. And Bollywood actor, Kunal Kemmu is a doting daddy to his little angel, Inaaya Naumi Kemmu. (Recommend Read: When Yash Chopra Had Revealed Why He Was Scared To Film Jaya Bachchan And Rekha Together In Silsila)

Kunal Kemmu and Soha Ali Khan's Instagram handles are a proof of their infinite love for their angel, Inaaya Naumi Kemmu. Their world revolves around their gorgeous princess and her every wish is their command. Once Kunal had expressed his feelings of exploring the world with his little daughter by his side. The actor had shared a picture with his father and his daughter, Inaaya. Along with it, he had written, "I held his hand and learned to walk like you are learning today.. one day I will walk with you as you show me around your roads. You learn from us today and I look forward to learning from you. I really hope I can be the father to you that my father has been to me. I think he may love you even more than he loves me now so enjoy that as he is the most fun person that I know..#happyfathersday." On the occasion of Daughter's Day, Kunal took to his Instagram handle and penned a lovely wish for his baby girl. He posted a perfect picture with his daughter, Inaaya, wherein he can be seen looking at her lovingly while she is lost in her thoughts. Alongside it, Kunal wrote, "When the world fits in your arms and you can embrace the life in it..the only relationship that’s cemented for life the moment it starts is that of a parent and their child. To every parent and to every daughter. #HappyDaughtersDay." Check it out below: On March 1, 2020, Kunal had treated his fans with an adorable picture of his baby girl all set to ride with him on his bike. He had taken to his Instagram handle and had posted the picture, wherein, we could see the father-daughter all set for their bike ride. They were seen holding their bike helmets and had looked adorable. Along with it, Kunal had written, "My new Sunday riding partner. Because it’s never too early to start.." (Also Read: Sara Ali Khan's Then-And-Now Photo With Her 'Abba' Saif Ali Khan, Looks Adorable In Big 'Bindi') 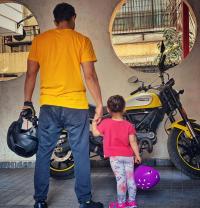 We remember once in an interview with the Asian Age, Kunal had shared how difficult it was for him to leave his house after Inaaya's birth. He had said, "If I wasn’t promoting Golmaal Again, I don’t think anything could have pulled me out of the house. But luckily Innaya spends a lot of time sleeping, so I keep constantly checking on her. It’s a great phase. I’m excited to see the phase where she’ll be more reactive." 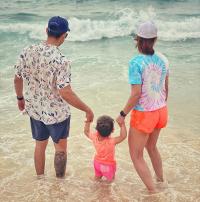 In an interview with the DNA, Kunal had shared the story behind his baby girl's name and had stated, "It’s weird. It just came to me. When you know you are having a baby, the first thing is you think about the names you can call your baby. Everyone goes through this and we also had a list. Inaaya just happened to strike me. I had never heard the name before but I must have had some connection with it and everyone quite liked the name. But it was one of the names I had chosen. Naumi was another name that I really liked. And my daughter has a middle name too. We were going with Inaaya but then, she was born on Mahanavami, so this was too much of a coincidence. Even though she will always be known as Inaaya, her official name will be Inaaya Naumi Kemmu." (Don't Miss: Alia Bhatt's Sister, Pooja Once Had A Major Fight With Ranbir Kapoor's Sister, Karisma [Watch])

Well, we love Inaaya's cutesy picture with her daddy, Kunal!

In the digital era, when nothing seems right and there is no happy news broadcasting on our television screens and mobile phones, one face that still brightens our day even in the midst of the pandemic is Bollywood couple, Soha Ali Khan and Kunal Kemmu's little daughter, Inaaya Naumi Kemmu. No matter, how