Back in time, Alia Bhatt’s step-sister, Pooja Bhatt had an ugly fight with Ranbir Kapoor’s cousin sister, Karisma Kapoor in public. Check out the video inside!

The fights in Bollywood are everyday news. Every other day the tabloids are filled with the headlines of cat-fights and showdowns between major stars. However, the new generation of Bollywood is bit more friendly as often they are spotted showering love on each other and partying together. The actresses in 90s were more involved in rivalries. From Sridevi- Madhuri Dixit to Shilpa Shetty- Raveena Tandon, many B-town actresses were claimed to be a part of cat-fights, however, did you know that Pooja Bhatt and Karisma Kapoor once had a major showdown? Scroll down to know more! (Also Read: Nick Jonas Revealed Why He Did Not Kiss Wife, Priyanka Chopra On Their First Date, Leaving Her Upset)

Alia Bhatt is dating Ranbir Kapoor and it is a known fact. Alia and Ranbir have mingled really well with one another’s family and are often seen spending time with them. It was in the year 2014, when Alia Bhatt had talked about her crush on Ranbir Kapoor in Karan Johar’s chat show, Koffee With Karan. Her honest pleas were heard by God as the actress had ended doing a film, Brahmastra with her long-time crush, Ranbir. The Cupid had played its role well to make them fall in love with each other. Since then, Alia has been hanging out with Ranbir’s immediate family and cousins, Karisma Kapoor and Kareena Kapoor Khan. However, back in time, Alia Bhatt’s step-sister, Pooja Bhatt had an ugly fight with Ranbir Kapoor’s cousin sister, Karisma Kapoor. 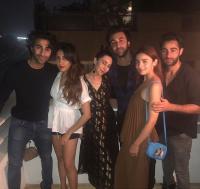 Yes, Alia Bhatt’s step-sister, Pooja Bhatt and Ranbir Kapoor’s cousin sister, Karisma Kapoor were not on talking terms for a long time when the two had an ugly fight in public. It is said that when the two actresses were on the peak of their acting careers, Pooja had spoken about Karisma and Kareena’s parents, Randhir Kapoor and Babita Kapoor’s separation. This was enough to irk Karisma and she had called her out for the same. She had said that Pooja Bhatt has no right to speak about her parents. She had continued further saying that once Manisha Koirala had called her a mixed up kid, without any reason, and she had given an upfront answer to her as well. Well, it is all in the past, as Alia Bhatt now shares a great bond with Kareena and Karisma and the three ladies adore each other.

We had also seen a glimpse of Alia Bhatt’s bond with Kareena and Karisma on May 11, 2020, when ace designer, Manish Malhotra had shared share a throwback picture of them from a five-year-old Vogue photoshoot on his IG handle. In the picture, all three ladies had looked gorgeous with Manish posing standing on a staircase in his black hoodie and blue jeans. The actresses had looked royal in the shades of golden. While Alia could be seen wearing a sequenced plunging neck gown, Kareena had worn a bell-sleeved, boat neck sequenced gown, and Karisma could be seen wearing a bustier with a golden skirt. The photoshoot had celebrated Manish’s 25 years in the film industry. Along with the picture, Manish had written, “#throwback Posing with the most amazingly talented favourite girls @therealkarismakapoor @kareenakapoorkhan @aliaabhatt @vogueindia covet shoot 5 years ago celebrating my 25 year journey in the movies #flashback #memories @mmalhotraworld.” (Don't Miss: When Alia Bhatt Had Picked Ranbir Kapoor As First Contestant For Her 'Swayamvar' If It Ever Happens) Even in 2018 on Sonam Kapoor Ahuja and Anand Ahuja’s wedding reception, Alia Bhatt was seen grooving with her future nanads, Karisma Kapoor and Kareena Kapoor Khan. In a video from their reception party, Kareena could be seen sitting on a chair, pulling Alia close to her, who had then called Karisma to join-in as they had posed for a picture together. (Recommended Read: Karan Johar Was Not Happy With Alia Bhatt's Decision Of Marrying Ranbir Kapoor)

We are glad that the Kapoors and Bhatts had let the bygones be bygones as we love Alia Bhatt and Ranbir Kapoor’s jodi!