Ibrahim Ali Khan is often compared to his father for striking similar looks. On March 8, 2020, he shared a perfect picture with Saif, giving major father-son goals. 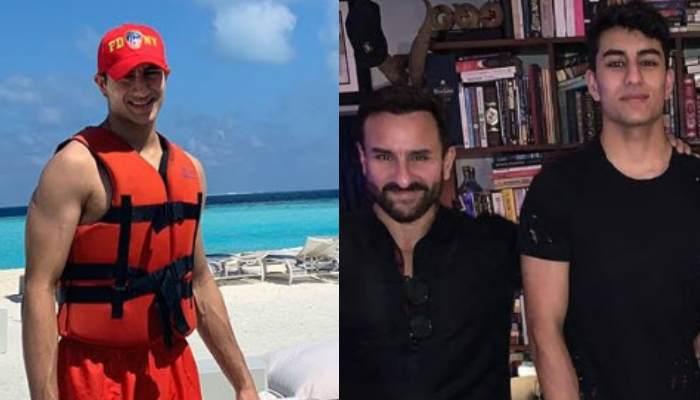 A father is always his son’s first hero, often tagged as one of the precious bonds, a father and son share a warm relationship. They rarely express their feelings for one another but carry an ocean of emotions for each other. Every son quotes his father in words and in deeds as he considers him as his true inspiration and follows his footsteps. Their relationship is way beyond any glossy words and the love they have for each other is non-comparable. Saif Ali Khan and his son, Ibrahim Ali Khan share a similar bond with one another. (Also Read: Radhika Merchant Drenches Anand Piramal In Water At Isha Ambani's Pre-Holi 2020 Party, Video Inside)

The young blood of Pataudi has always garnered attention for his striking resemblance with his father, Saif Ali Khan. Saif has always been a protective father but he makes sure that he shares a comfortable bond with his kids, Ibrahim Ali Khan, Sara Ali Khan and Taimur Ali Khan. Ibrahim had made girls go weak in the knees when he had made his debut with the cover of Hello! Magazine with his sister, Sara. Since then, there have been speculations about the young lad of the Pataudis making his entry into Bollywood.

On March 8, 2020, Ibrahim took to his Instagram handle and shared a picture with his father, Saif. Ibrahim looked dapper in a navy-blue coat paired with black trousers, while his dad complemented him perfectly in a black coat and a white shirt which he paired with denim. One look at the picture gave us major father-son goals. Along with the picture, Ibrahim wrote, “just me and the old man.”

On March 8, 2020, Ibrahim posted an adorable wish for his mother, Amrita Singh on Women’s Day. He took to his Instagram handle and shared an unseen picture of himself with his mother, Amrita. With innocence in his eyes, Ibrahim looked adorable in a red shirt as he posed with his momma. Along with the picture, Ibrahim wrote, “Happy Women’s Day to the best woman I’ll ever know” followed by a heart emoticon. (Also Read: Tina Ambani Shares An Adorable Wish For Akash Ambani And Shloka Mehta On Their First Anniversary)

In an interview with E Times, the Laal Kaptaan actor had gotten candid about his son, Ibrahim’s Bollywood career. Saif had stated that if his son is interested in making a career in Bollywood, then he should do it on his own without the tag of his father. Saif, who has given a number of comic hits had felt that his son (if enters Bollywood) should do a light-hearted movie. Saif had also given examples of his films like Salaam Namaste, Hum Tum and Race and had stated that it is up to Ibrahim whether he wants to be an actor or not and what genre he wants to debut with.

Ibrahim Ali Khan is very close to his mother but has always said that his father is his constant guide. In an interview with News18, when Ibrahim was asked how it feels when his appearance is constantly compared to that of his father, Saif Ali Khan, he had retorted, “There are scenarios where people – whether it’s an old relative, my mother or a family friend – tell me, ‘Oh my god, you’re just like him (Saif) and he does that too!’ I guess maybe we are similar but I wouldn’t know that... But regardless, he is special to me. He is also my guide when it comes to man-to-man conversations.”

Amrita Singh dotes on her son, Ibrahim and had stated that he is a gifted child. In an interview with Times Now, she had shared the qualities of Ibrahim and had revealed, “Ibrahim is the ‘old soul’ in our home. He’s kind and gentle and has the most sorted mind. He’s gifted with the ability to face the harshest truth with a brave smile and a strong will to overcome any shortcomings. But, the one problem I have with them is that they are both extremely messy and untidy.” (Also Read: Suhana Khan's Now Public Insta Handle Has Aryan And AbRam Khan's Pictures, Proves 'Bros Before Hoes')

What do you think about Ibrahim’s picture with his ‘old man’, Saif? Let us know.