Hiten Tejwani and Gauri Pradhan are one of the most loved telly couples. On September 16, 2020, Gauri turned a year older and Hiten had the sweetest message for her. When we first saw them in Ekta Kapoor’s serial, Kutumb, we had fallen in love with their on-screen chemistry. Little did we know that years later, they will make a ‘Kutumb’ of their own in real life. Hiten and Gauri are one of the most loved couples of the telly world and in real life too their bond is an inspiration to many. From ‘Pratham’ and ‘Gauri’ in Kutumb to ‘Karan’ and ‘Nandini’ in Kyunki Saas Bhi Kabhi Bahu Thi, Hiten and Gauri are still everyone’s favourite jodi. (Also Read: Aly Goni Sends A Box Of GiftsTo Alleged Beau, Jasmin With A Quirky Note, Leaves Her In Two Moods)

Hiten Tejwani and Gauri Pradhan had met officially on an ad shoot for the first time. Although, earlier when they had seen each other at Mumbai airport, the two were not aware that they were paired with one another in a TV commercial. Love had blossomed between Hiten and Gauri when they were paired opposite each other in the serial, Kutumb. Hiten and Gauri had entered marital bliss on April 29, 2004. On November 11, 2009, the duo had embraced parenthood and had welcomed their twins, Nevaan and Katya. 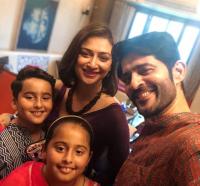 On September 16, 2020, Gauri turned 43 and her loving husband, Hiten penned a lovely note for his lady. He took to his IG handle and shared a picture with Gauri where the two were seen smiling and posing for a selfie. Along with the picture, Hiten wrote, “Happy birthday beautiful..my partner ..my everything… So much to say...God bless you with lots of happiness and may u keep smiling always...love you” followed by a heart emoticon. On his post, Gauri commented with an array of heart and kissing emoticons. He also shared a video giving glimpses of his 'Woman Crush Wednesday' and wrote, "Happy happy birthday love." 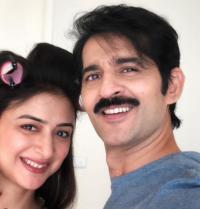 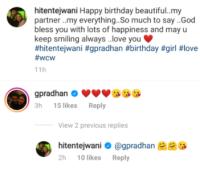 Last year, on September 16, 2019, when Gauri had turned 42, Hiten had wished his soulmate with a heartfelt post and a lovely kiss. He had taken to his Instagram handle and had shared an adorable picture of the couple kissing each other with cake in Gauri’s hand. Hiten had captioned the post as “This amazing woman is our lifeline. thank you so much for being there...May you have the best of everything and I’ll try to keep my cupboard clean from now on. Happy Happy Birthday Jaanu...Love you...God bless you...Muaaah. Thank you " Gauri had replied to the post with utmost love and had written, "Awww. Thank you Jaanu!! Thank you for everything! Love you," followed by a heart emoji. (Also Read: Akshay Kumar Wishes 'Big Boy', Aarav On 18th Birthday With Throwback Photo, Showers Him With Praises) 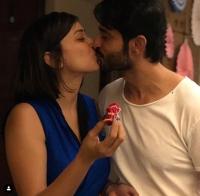 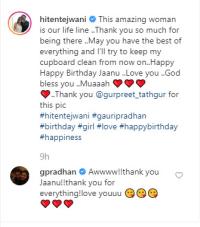 In an interview with Pinkvilla, Gauri had spoken about her marriage and hubby, Hiten Tejwani. She had shared, “It doesn't feel like 13 years and the journey has been amazing. He is a great guy. I think everyone should have a husband like that so that life becomes easy for you and him both.” Gauri had further revealed that she considers herself lucky to have such a down to earth husband and had stated, “He is very down to earth and extremely caring. He is very entertaining, which is very important otherwise it gets really boring. I tell people that we don't put the television on in our house because we don't need any other medium of entertainment when Hiten is around. He is like a child, an overgrown child. Whenever I am angry I can show my eyes at least to the kids but with this guy, nothing works.” 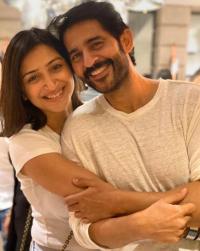 Both Hiten and Gauri have never shied away from flaunting their love for one another. On July 16, 2020, Hiten had taken to his Instagram handle and had shared a monochrome picture with his soulmate, Gauri. Curled up in each other’s arms, both Hiten and Gauri had looked like a match-made-in-heaven as they smiled for the camera. Along with the picture, Hiten had written a heart-melting caption, which could be read as “Love is all I have ...and will always love you.” (Also Read: Tiger Shroff Shares Unbelievable Air Flips Video, Alleged Girlfriend, Disha Patani Drops A Comment) 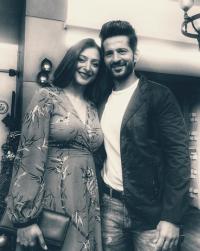 From strangers to friends and then to soulmates, the journey of the ideal couple of television, Hiten Tejwani and Gauri Pradhan is one of the most romantic one. Someone is destined for you somewhere stands perfectly true in the case of this lovely couple. When soaps operas were religiously watched in