Are Hina Khan And Rocky Jaiswal Participating In Nach Baliye 9 Together? Here's The Answer

Are Hina Khan And Rocky Jaiswal Participating In Nach Baliye 9 Together? Here's The Answer 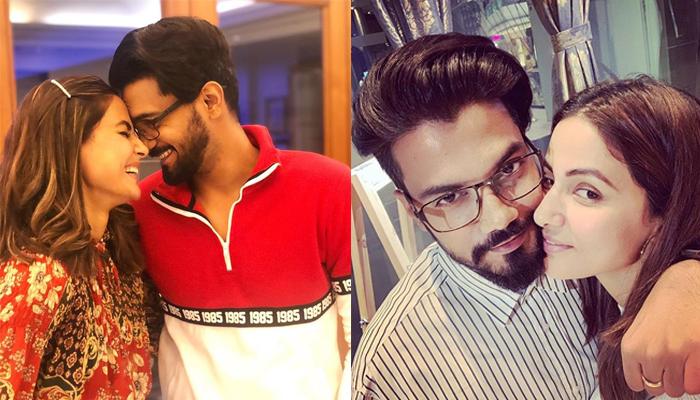 Nach Baliye season 9 is all set to make you glued to your television sets and it’s going to be all the more exciting this time. Reportedly, Salman Khan will produce the ninth season with Katrina Kaif as the judge of the show with Jennifer Winget and Sunil Grover as hosts. Television couples like Rubina Dilaik-Abhinav Shukla, Divya Agarwal-Varun Sood, Anita Hassanandini-Rohit Reddy, among others will reportedly be participants in the upcoming installment. (Suggested Read: Baaghi 2's Prateik Babbar Posts A Heart-Wrenching Note About His 'Real Parents' On Their Birthday)

Hina Khan and Rocky Jaiswal were also thought to be roped in for Nach Baliye 9. But Hina Khan has refuted such reports and has revealed to TellyChakkar, “Yes, we are approached for Nach Baliye. However, we won’t be able to participate, as we both have packed schedules. I am busy with Kasautii Zindagii Kay and the movie schedule lined-up, while Rocky will soon fly to London for his next feature film.”

Hina and Rocky together make one of the most revered and popular couples in the tinsel town. Recently, Rocky opened up about his love story with Hina and was quoted as saying, “We met on the sets of Yeh Rishta Kya Kehlata Hai for the first time where I was the supervising producer and she was playing the lead role. That's how we met. As for what attracted me to her was her dedication to her work. I have seen a lot of actors, but she is one of the smartest of the lot”.

Adding further, he had shared that Hina is always honest all the time, “It is almost unreal if you find a person who's so honest all the time. She calls a spade a spade every single time. And that's the most important thing I love about her. Besides, she is the prettiest woman in the world." (Must Read: Kangana Ranaut Is All-Praises For Kareena Kapoor Khan, Says She Is An Epitome Of A Perfect Woman)

Hina and Rocky’s wedding reports have always attracted their fans. Rubbishing such rumours off, Hina had recently said, “No, not at all. If anything happens, it will be marriage which I've already said won't happen any time before 3 years. I don't understand why they can’t do without making news that includes me. This is nonsense.”

Making their relationship public, Rocky had proposed to Hina on national television during his appearance on Bigg Boss 11 in 2017. Speaking about her feelings about the proposal on national television, Hina Khan had shared later, “It was kinda sweet surprise for me as well. I wasn't prepared for it and neither was it planned. It just happened. I usually don't talk about my personal life but over there, you become so overwhelmed. The moment I saw him I could not control myself and when he kind of, it was not a proposal, we were in love before as well but the way he said it, I could not hold back and said it back, I love you too. It was sweet. I will always remember and cherish that moment.”

It would have been amazing had Hina Khan and Rocky Jaiswal participated in Nach Baliye 9, right? Anyways, we hope to see them in their wedding avatars soon.