Hina Khan Shares An Adorable 'Mirrorfie' With Beau, Rocky Jaiswal While Spending Some 'Us' Time

Hina Khan Shares An Adorable 'Mirrorfie' With Beau, Rocky Jaiswal While Spending Some 'Us' Time

Hina Khan and Rocky Jaiswal are made for one another and keep on sharing lovely pictures with each other. On November 6, 2019, Hina posted an adorable 'mirrorfie' with Rocky on her Instagram handle. Tere Bina Jeeya Jaaye Na, Tere Bina Jeeya Jaaye Na… being in a relationship is a beautiful feeling and you are truly blessed if you are with someone who makes sure to take care of your little things, fulfils your tiniest demands. It takes a lot of effort to build a strong relationship and that’s not all, sustaining that relationship requires a lot of patience, trust, mutual respect and love. Talking about ideal relationships takes us to one of the most sought after celebrity jodi, of Hina Khan and Rocky Jaiswal. (Also Read: Vikrant Massey Receives A Warm Welcome At His Ladylove, Sheetal Thakur's Hometown)

It was during her stint in Bigg Boss house, we got to see Hina Khan’s much talked about relationship with beau, Rocky Jaiswal. Rocky, who had proposed Hina inside the Bigg Boss house was a sight to behold. The much-in-love couple is often seen taking some 'us' time out of their busy shooting schedules and spending quality time with each other. The two had met on the sets of Yeh Rishta Kya Kehlata Hai where Hina played the lead role of Akshara and Rocky was the supervising producer of the show. The two had shared a very good rapport as friends initially which eventually turned into love. 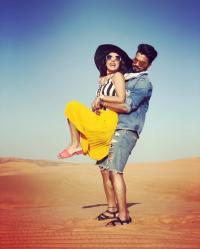 On November 6, 2019, Hina took to her Instagram stories and shared a few ‘mirrorfies’ with Rocky. Hina looked beautiful with a no-makeup look posing with a bunch of lilies in one picture. In the other picture, she and Rocky were seen spending some ‘us’ time with each other. The Kasautii Zindagii Kay 2 actress also added a few lines of a song from the movie, Kabir Singh which could be read as ‘Tujhe Kitna Chahne Lage Hum’. In the pictures, Hina looked happy and was glowing in the company of Rocky. 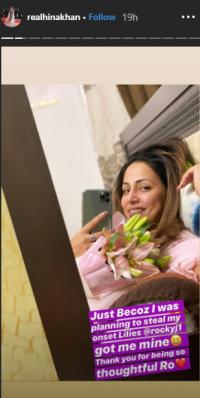 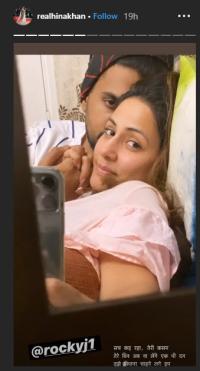 In an interview with the India Today, Hina Khan had revealed how surprised she was about Rocky Jaiswal proposing her on national television and had stated, “It was kinda sweet surprise for me as well. I wasn't prepared for it and neither was it planned. It just happened. I usually don't talk about my personal life but over there, you become so overwhelmed. The moment I saw him I could not control myself and when he kind of, it was not a proposal, we were in love before as well but the way he said it, I could not hold back and said it back, I love you too. It was sweet. I will always remember and cherish that moment.” (Also Read: Taimur Ali Khan Can't Let Go Of His Drink As He Poses With Kareena, Saif And A Fan At A Restaurant) 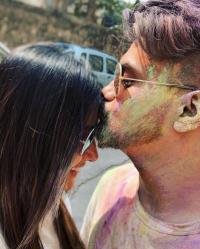 In the same interview, Rocky had revealed how he fell in love with Hina and what is that one thing that attracted him towards Hina. Talking about the same, Rocky had stated, “We met on the sets of Yeh Rishta Kya Kehlata Hai for the first time where I was the supervising producer and she was playing the lead role. That's how we met. As for what attracted me to her was her dedication to her work. I have seen a lot of actors, but she is one of the smartest of the lot.” 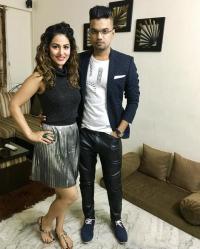 He also added that one of the best things about Hina is that she calls a spade a spade and has always spoken her mind. Besides being the prettiest woman, she is a very dedicated artist and an honest human being. He had also stated that it is very difficult to find somebody who is so brutally honest. There were rumours about the two tying the knot very soon but Hina clarified the rumours and had stated that it won’t happen before 3 years. (Also Read: Malaika Arora Points Out One Habit Of Her Boyfriend, Arjun Kapoor, She Does Not Approve Of) 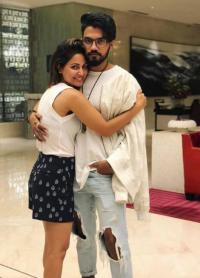 Aren't they adorable? What do you guys think? Keep us posted.

We all dream of falling in love with someone, who treats us like a best friend and a lover at the same time. The one with whom life becomes a bed of roses and the one, who understands our little tantrums. No matter how cliche it might sound, we all are