To lose someone you love is like losing a limb! You have to continue living, with a permanent impairment. Hina Khan is dealing with the same loss as April 20, 2021, had brought the saddest news of her life for her. When the actress was busy shooting in Srinagar, she had received the news of her father’s untimely demise due to cardiac arrest. A bewildered daughter had rushed back home to be with her family. However, later, she had contracted the Coronavirus. While Hina has recovered from the virus, it will take her forever to recover from the loss of her father.

Soon after her father’s death, Hina Khan had expressed her love and had given tribute to her late father by changing her IG bio. The actress’ IG bio now reads, "Daddy's strong girl." Her heartwarming gesture had won everyone's hearts. Since then, Hina’s helplessness and emotional vulnerability is quite visible in everything she does. From wearing her late daddy’s t-shirts to missing him while shooting, Hina has been sharing her pain on her IG handle. And as it’s been one month to her father’s demise, Hina Khan shared an old video with him.

Taking to her IG handle to mark one month of her father’s death, Hina shared an old video with her daddy, where the father-daughter duo happily sang the song, ‘Aane wala pal, jaane wala hai.’ Little did Hina know that this song is the reality of life as, within a few months, her time with her father will come to an end! In the video, Hina can be seen singing along with her late father, and her mother and her brother too had joined them. She captioned the video as “It’s been exactly one month today Dad We Miss you.”

Hina has been keeping her father alive in her life in every possible manner. On May 19, 2021, Hina had taken to her IG handle and had shared how she meets her late father every day. Hina had shared an emotional video, where she could be seen standing at her balcony and pointing towards an area at a distance. It had looked like, the place that Hina had pointed towards is the burial ground, where her father was laid to rest and it could be seen from her house. Sharing the video, Hina had written, “Mai Tere Bina taan yaara aaj te patthar wargi aan.. My version of #PattharWargi I am just unable to think of anything else Miss you Dad This is how he chose to be close to us.. Did not leave his family alone.. Can see him everyday from our Balcony.. I know you are watching our back Dad.. Your Family loves you.. #HisFamilyForever #DaddysStrongGirl.”

On May 13, 2021, Hina had taken to her IG handle and had shared two stories. In the first one, the actress could be seen recording herself, wearing her late father’s t-shirt and had written, “#BabaKiRaniHoon” and “#DaddysStrongGirl” atop it. In the other story, Hina had shared a picture with her late father, where he could be seen wearing the same t-shirt, posing with his daughter for the camera. Sharing the picture, she had written, “Forever your strong girl” atop it. 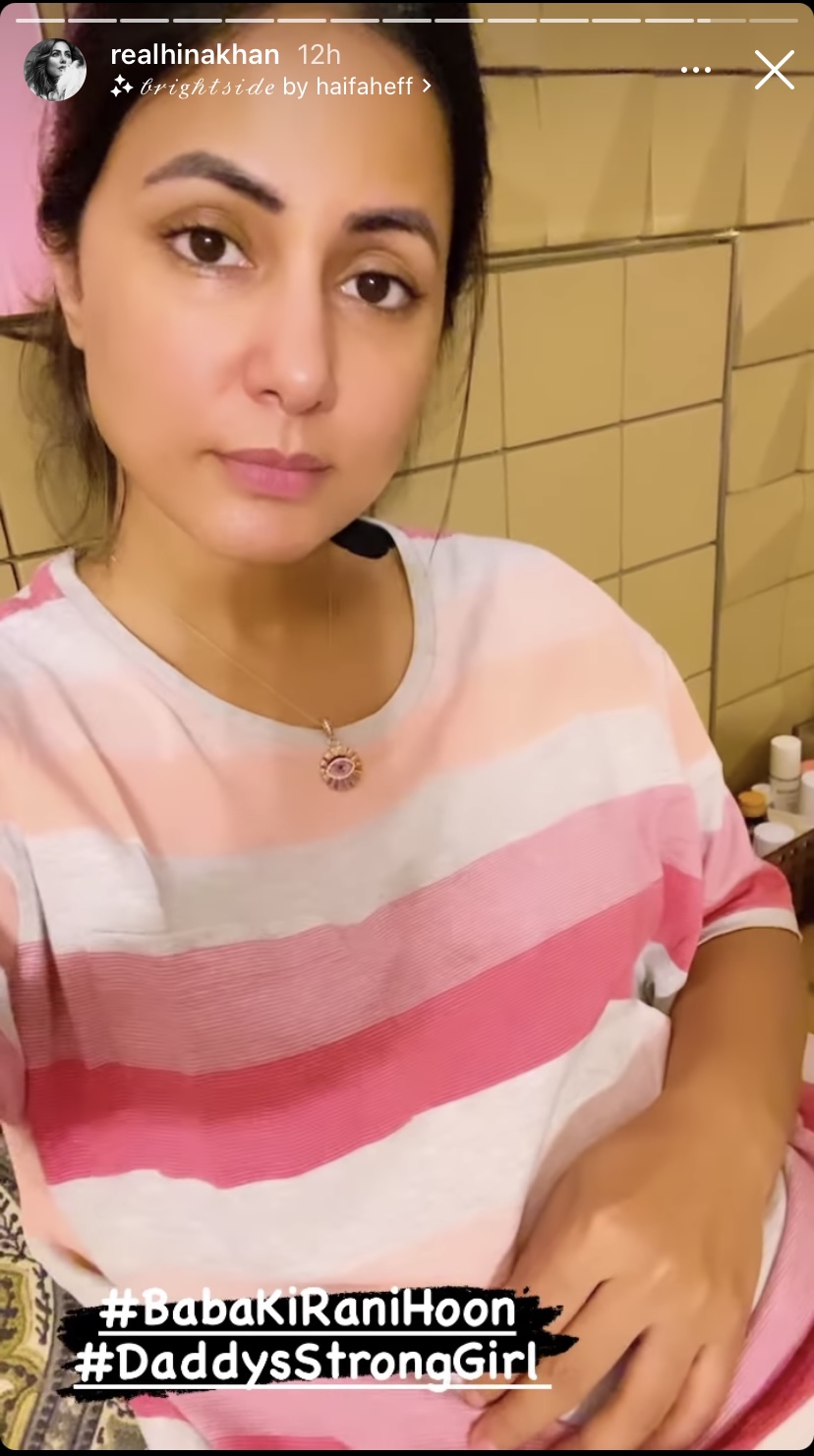 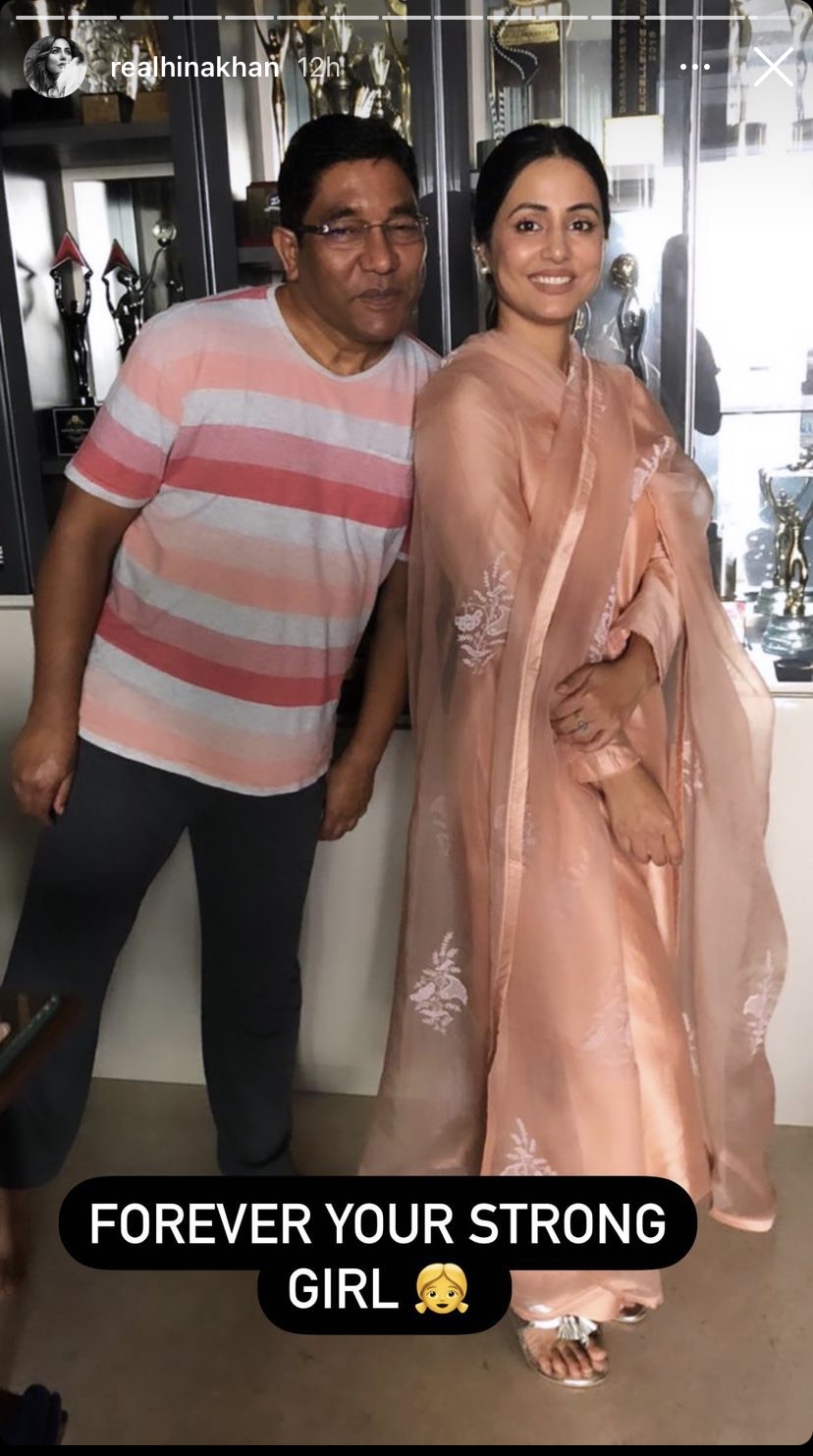 Later, Hina had taken to her Instagram handle and had shared an IG story, remembering her late father as she had done her first shoot after her father’s death. In her post, she had poured her heart out, remembering the little things her father used to do for her. Hina's note could be read as "How you used to set my makeup chair at home, turn on the air conditioner, come in between to check on met, watch me get ready. Those proud eyes, missed everything today. I love you daddy. Your strong girl is missing you." 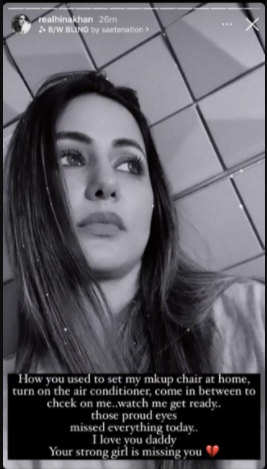 We pray for strength for Hina Khan and her family!