Hina Khan and Rocky Jaiswal have lived upto our social media PDA expectations and given us a cue about how to do it just right! Scroll down to read more.

The expression of love has continued to change since its very existence. Gone are the days when lovers used to tie letters on a pigeon’s legs and fly it off to his/her beloved. Then came the era of writing letters and handling it to their beloved, in person. Post which, arrived the time when we would secretly sneak our parent’s phone when they would be sleeping soundly and text this to our special one, “Listen, I love you. See you tomorrow in school. Don’t reply”! But in the modern 21st century, lovers express their love towards each other through social media and truly adhering to the same, are telly town’s one of the most amazing couple, Hina Khan and her beau, Rocky Jaiswal. (Do Read: Rohan Hingorani And Shruti Sinha Of 'Roadies' Fame Share Adorable Video Of Their Underwater Romance)

Time and again, have we seen Hina Khan and Rocky Jaiswal, taking stands and expressing their love for each other through their Instagram stories. Even when Hina was enjoying her blissful time with her fun-filled family holiday in the Maldives, thoughts of her producer boyfriend, Rocky Jaiswal didn’t seem to cease. While Rocky was busy shooting for his feature film, Doorman, in London, Hina was on a vacay. The star producer had then taken to Instagram and posted a beautiful picture of a yellow dandelion flower, with the words, “Everything rare and pretty reminds me of you!” written atop the picture and had tagged ladylove, Hina Khan on the post. The doting girlfriend had then reposted the same from her Instagram story and had written “Miss You” on it, followed by a lovey-dovey emoji. Here’s a snapshot of the same: 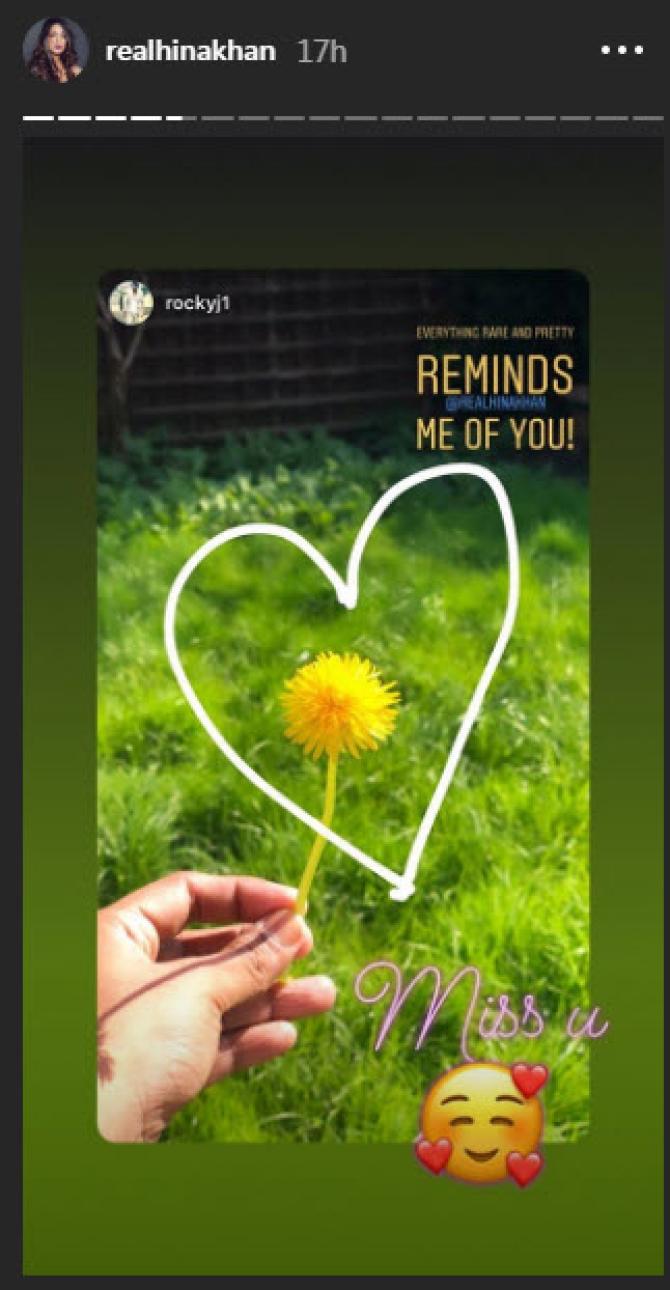 And once again, Hina Khan and Rocky Jaiswal have lived upto our social media PDA expectations and given us a cue about how to do it just right! For instance, Rocky recently took to his Instagram story and posted a quote about Karma which could be read as “Karma doesn’t differentiate between you and the things you love. When it decides it’s your turn, it’s always a package deal!” Post which, Hina took to her Instagram story and praised her boyfriend for his writing. Rocky then, took to his Instagram story again and applauded his muse, Hina’s beauty. Hina them again, posted a few words for her boyfriend and their series of expressing love towards each other continued until their Instagram stories started looking like a ‘black hole’, as per Hina! Checkout the same here: 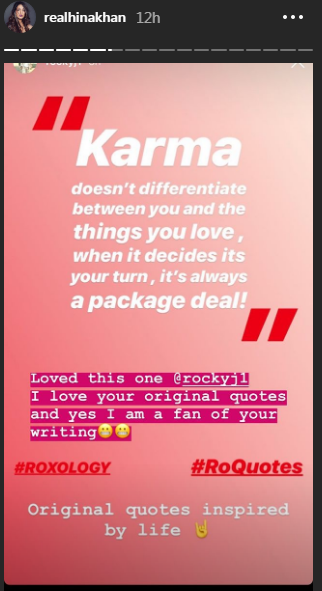 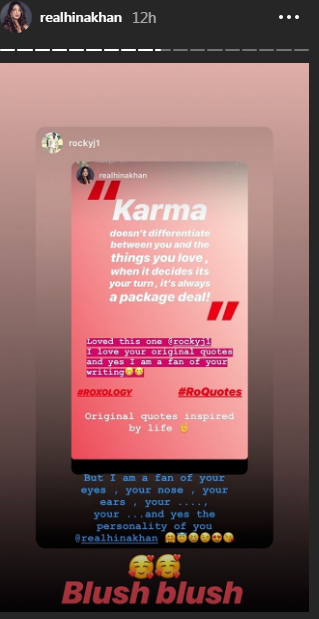 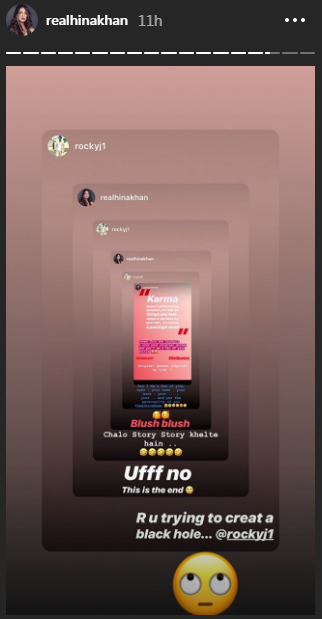 Hina Khan is riding on a pillion of professional success these days and had made a lot of commotion for her grand Cannes 2019 debut. Hina Khan had looked amazing and we couldn’t help but had drooled  over her look, Filmfare’s Editor, Jitesh Pillai had taken to Instagram and posted a story, which contained a picture of Hina, who was posing with a pout for the camera and wrote the words, “Cannes has suddenly become chandivali studios kya?" This post had immediately created quite a hullabaloo in the telly industry and innumerous tv stars started bashing Jitesh Pillai for his comment, many calling it derogatory. And just as we were expecting, bang came Hina's boyfriend, Rocky Jaiswal’s reply to Jitesh, who had criticised her on her Cannes 2019 look. (Must Read: Priyanka Chopra Jonas Reacts To Trolls Who Targeted Her For Posting Pics With Husband Nick Jonas) 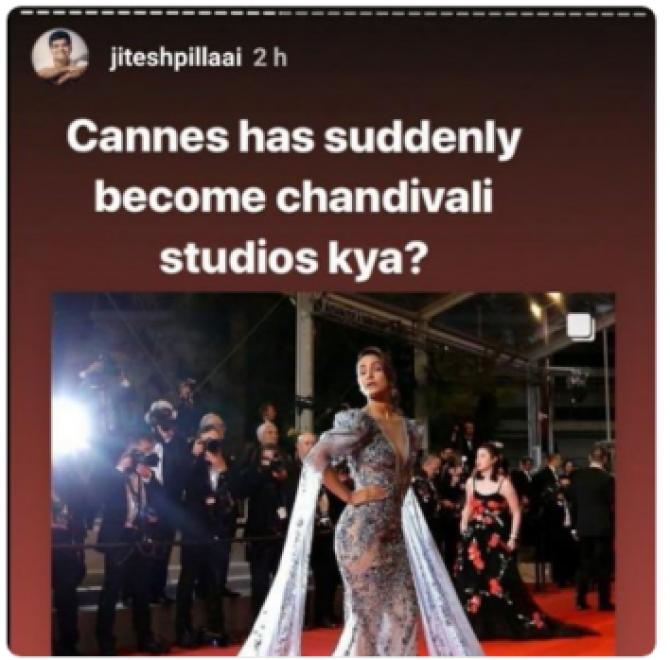 Bashing Jitesh Pillai, Rocky Jaiswal had written, “Some rats spend their entire lives chewing off the very vessel they live on and it’s not hard to imagine them to be the 1st ones to run if the ship sinks, god forbid. It becomes surprising, however, when the little creatures blame themselves for the unfortunate demise of the mighty ship. Rats don’t sink ships. They live off of it and die as Rats do!  Dear Rat, this ship is not just any floater. This ship is unsinkable and your ship my friend, I am afraid, has sailed!” In yet another Instagram story, Rocky Jaiswal posted a heartfelt message for his muse, Hina Khan and praising her to the core, had written, “Now I want to talk about the giant heart of a girl I know. Her passion, her dedication, her hardships, her challenges, her leaps, her risks, her hard work, her talent, her journey and her achievements are worth singing laurels! She is indeed the breaker of barriers and stereotypes and a god’s own child who believes in looking ahead rather than backwards. Mediums don’t define her, she’s a phenomenon in and as herself! That’s why we love her! #sherrkhan.” Aren’t they amazing? Hina Khan and Rocky Jaiswal are one of the few couples, who fell in love on the sets of Yeh Rishta Kya Kehlata Hai. Speaking of where they met and how love happened, Rocky had shared, “We met on the sets of Yeh Rishta Kya Kehlata Hai for the first time where I was the supervising producer and she was playing the lead role. That's how we met. As for what attracted me to her was her dedication to her work. I have seen a lot of actors, but she is one of the smartest of the lot.” And further added, “It is almost unreal if you find a person who's so honest all the time. She calls a spade a spade every single time. And that's the most important thing I love about her. Besides, she is the prettiest woman in the world.” (Also Read: Sushmita Sen's BF, Rohman Shawl Had Texted Her On Instagram As A Fan, She Had Opened It By Mistake)