Himanshi Khurana took to Twitter to urge people to stop comparisons, although she didn't take names, we're guessing it's about Shehnaaz Gill. Check out the details inside!

Courtesy to the content, Bigg Boss 13 was probably the most controversial of all the seasons and had topped the TRP list. Friendships, bonds, deceiving, jealousy and whatnot, every element of human emotions were floating in their raw form and we were hooked to the atrocities in the house as if it were a part of our lives, making season 13 of the Bigg Boss the most popular season ever. Amongst all of the chaos, one particular scandal had phased away in a haste, in the house but its repercussions can still be seen around. (Recommended Read: Kareena Kapoor Khan Found Guilty Of Munching Carbs As Arjun Kapoor Flaunts His 'Mehenga Chashma')

Yes, we're talking about the alleged frenemy of Himanshi Khurana and Shehnaaz Gill, which might have ended in the Bigg Boss house, as shown (we never know though!). But seems the after-effects of the same are still catching up. Not clear about what their whole feud was all about, the internet has resorted to drawing comparisons between the two artists on the basis of small, petty things. Fed up of the same, Himanshi has something to say to the trolls. Check out the details below! 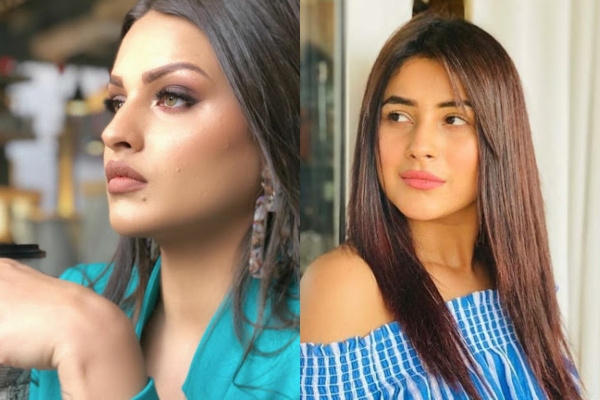 Tired of constant bickering and comparison over whose outfit is better, or whose TikTok was better and a lot of other things, Himanshi Khurana finally took out all her anger on Twitter. On April 28, 2020, Himanshi took to her Twitter handle to post a contemplative message urging people to stop comparing her with others as every face is different and beautiful in its own self. Her tweet could be read as "Whose tiktokgame is better ,,, who rocked outfit better , who look better ... don’t you think ki ik ko dusre se compare krna not gud ....outfit alag, jewellery alag face alag .....can we just appreciate or adore bcz every person is beautiful." Indeed, we agree with you. Maybe it's high time we stopped drawing comparisons and appreciate each individual, the world would be a much better place then! 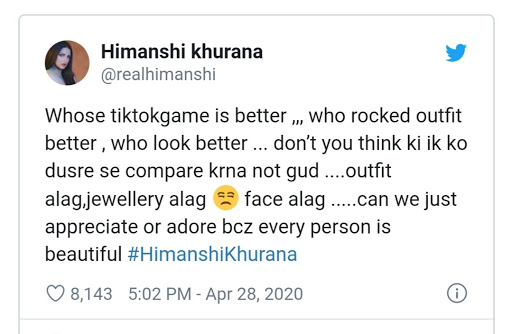 Although Himanshi didn't take any names in her cryptic post, we faintly guess that it was all about her arch-nemesis, Punjab ki Katrina Kaif, Shehnaaz Gill. Himanshi and Shehnaaz were not on good terms when the latter had entered the house of Bigg Boss, courtesy to their age-old feud (which, no one has a clue what was it about till date!). Anyway, after a lot of tantrums, arguments, bickering and mediation, the two had become friends and had parted ways on good terms with each other. But their fan clubs and armies on social media have continued the war and kept drawing comparisons on their outfits, videos acting and whatnot. Guess Himanshi was done with this stupidity and hence decided to bare it out for once and all. We only hope that it would stop after her appeal to her fans. (You May Also Like: Jasleen Matharu Dancing Wearing Chooda And Sindoor Left Fans Wondering If She Got Married?) Himanshi was in the news sometime back as well, with rumours of her breakup with her alleged boyfriend, Asim Riaz. On April 7, 2020, Himanshi Khurana had taken to her Twitter handle and had tweeted something that had gotten all the #asimanshi fans worried. Her tweet could be read as "No one wants to see us together." This started all the speculations of the couple’s breakup in the first place. Although, Asim had come to save the day and had cleared the air on those rumours, emphasising firmly that they're still together. His reply on Himanshi's post could be read as "@realhimanshi BABE I AM WITH YOU NO MATTER WHAT THEY SAY OR DO.!!!" (Also Read: Nick Jonas Has Turned In-House Tutor For Wife, Priyanka Chopra And Is Teaching Her This) 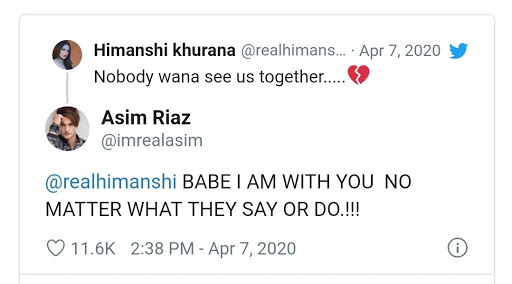 Do you also think its high time to stop the comparison between artists? Let us know!