On December 23, 2018, Hasleen Kaur had gotten married to her longtime beau, Amber Rana, in a private, traditional Sikh wedding. She had looked ethereal as a Sabyasachi Mukherjee bride. 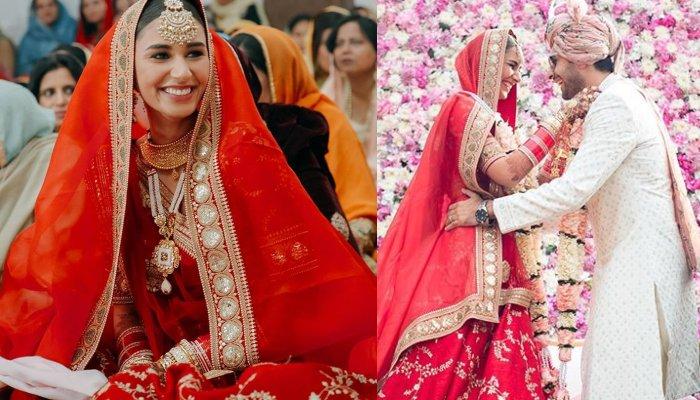 India is a diverse nation and that’s what makes this country so unique! And when we talk about diversity, it brings about varied customs, rituals and specialisations pertaining to its own. This is exactly where every community, has its own specific customs and attires and one of the most beautiful ones is an Anand Karaj Sikh wedding. Known for the royalty and elegance that it comes laden with, the wedding rituals and Sikh brides make for one of the prettiest ladies ever! Speaking of which, makes us want to share with you, beautiful pictures from Miss India Earth, Hasleen Kaur, which will give you major #SikhBride Goals. (Do Read: A Curvy Sabyasachi Bride Opted For Broad Beautiful Neckline At Her Castle Wedding And Looked Amazing)

It was on December 23, 2018, when Hasleen Kaur had gotten married to her longtime beau, Amber Rana, in a private, traditional Sikh wedding. On March 05, 2019, a few months after their wedding, Hasleen took to Instagram to post a series of amazing pictures from her wedding. She had captioned it as “And now that we have most of the pictures from the wedding... @amber_rana_ was making me laugh a lot! Making funny jokes all the time. Thank you to everyone who was part of our big day. Wearing @sabyasachiofficial MUA @savleenmanchanda Hair by @gusainrama.” 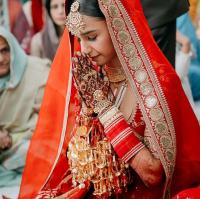 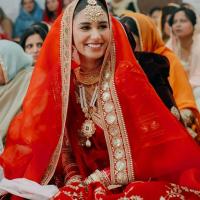 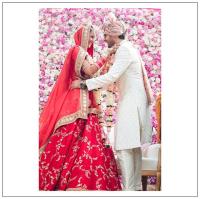 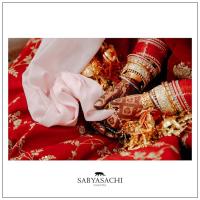 Sabyasachi Mukherjee had also written a beautiful note for Hasleen Kaur. The same could be read as “A first runner-up in Femina Miss India, Hasleen Kaur has walked the runway for Sabyasachi many times. A beautiful girl inside and out with an infectious smile, Hasleen chose to wear a Sabyasachi red lehenga. She said it made her mother very happy to see her dressed up in red for her wedding day.” Along with the note, also checkout a few more candid pictures of Hasleen from her wedding, which she had posted just after her wedding. (Must Read: The Journey Of A Sikh Bride, From 'Roka' Ceremony To 'Gharoli', It Is Filled With Lots Of Fun) 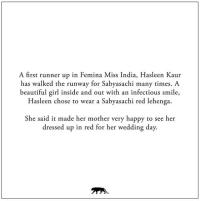 Hasleen Kaur’s pre-wedding celebrations had officially begun from December 21, 2018. It all began with a cocktail and a mehendi ceremony held thereafter. For her mehendi ceremony, Hasleen had donned a stunning chikankari ensemble from designer, Abhinav Mishra's collection that had totally stolen the show. She had also taken to Instagram and posted a series of pictures with her bridesmaids. She had captioned it as "@abhinavmishra_  I can’t Thankyou enough for making my mehendi such a stellar function yesterday. And for providing me with everything. Very few people are blessed to have friends like you. And @varunpratap_. Thank you for being the backbone of all of this. We really missed you yesterday.”

Hasleen’s Kaur’s note had further continued, “I wish you were there to see your idea turn to reality. It truly was such a beautiful evening. My only and most beautiful memory or a pre-wedding function was made a fantasy-like real because of you. Vanshika you’ve been so patient through all of this and coordinating with my friends. I know it’s not easy. But you took such loads off me. I’m grateful  In times like these you realize who the angels in your lives are, you all were god sent for me. My parents and the whole family is praises for the way everyone looked thanks to this BIG sponsorship." 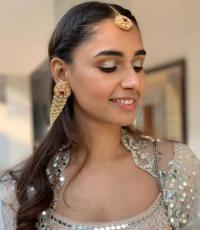 In a throwback interview with The Times of India, Hasleen Kaur had revealed that she won’t stop working post her wedding. She had revealed, "I will keep travelling between the two cities. Delhi, like always, will remain home, but will have to travel to Mumbai for work." Her friend from the pageant time, Jyotpriya said, "We know each other since the time she participated in the Miss India pageant in 2011. We contested together and became good friends. Later, we worked together as models in many shows." For the uninitiated, Hasleen has also worked in a Bollywood film, Karle Pyaar Karle, which did not emerge to be a great box office success. (Also Read: NRI Bride Wore Deepika Padukone's 'Dil Guldasta' Reception Lehenga At Her Wedding, Looked Heavenly) 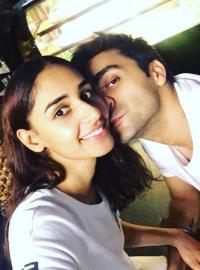 So dear readers, how did you like Hasleen Kaur’s red Sabyasachi lehenga? Keep us posted!