The Journey Of A Sikh Bride, From 'Roka' Ceremony To 'Gharoli', It Is Filled With Lots Of Fun

The Journey Of A Sikh Bride, From 'Roka' Ceremony To 'Gharoli', It Is Filled With Lots Of Fun

The big fat Punjabi weddings are known all over the world for the 'naach-gaana' and mouth-watering 'khaana'. And here we are giving you a ride into a Sikh bride's journey from 'Miss to Mrs'! 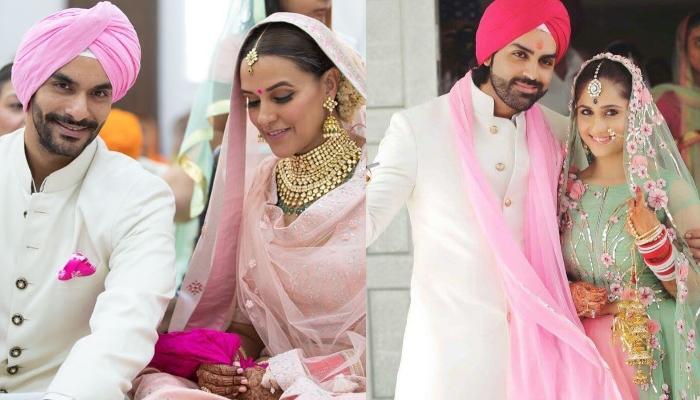 Since the age of six, we all loved playing ghar-ghar and dressing up as a dulhan ready to leave her home. As we grew old, our dreams of becoming a bride has turn into a long list of 'do's and don'ts'. We have memorised all the different rituals and have replayed it in our head, a zillion of times before we actually become a bride. And if you have ever come across a Sikh bride, we are sure you have seen her with a big book of what all she wants in her big fat wedding. After all, she has been waiting anxiously for this day to arrive. So, hop on as we give you a ride into a Sikh bride's journey from 'Miss to Mrs'!

Recommend Read: 6 Things A Sikh Bride Can Carry Off Well And Prove To Be A Swagger 'Dulhan'

For those of you who don't know, marriage in Sikhism is considered as a step closer to God. Unlike other religions, a Sikh wedding is a union of two souls, centered around the present Guru, Guru Granth Sahib Ji. It is the highest form of love and gives equality to the women, who run the households and nurture life. The Anand Karaj is a legally recognised marriage ceremony since 1909 which joins two people together in the holy bond of matrimony. Earlier, a Sikh bride used to wear the prettiest red patiala suit for her Gurudwara wedding, but now as per the new trends, they don't shy away from experimenting with lehengas. Scroll down to read further! 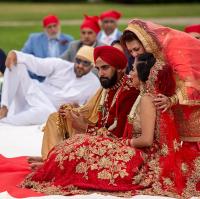 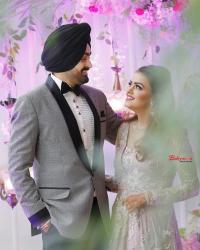 Engagement is the official ceremony, wherein, the bride and groom exchange the rings. Before the engagement ceremony starts, Kurmai ceremony takes place for the groom. The Sikh priest offers a short prayer, and the family of the bride offers a kara to the groom. Along with the kara (steel bangle), the groom is also given a kirpan (a small knife that is a reminder of their heroic heritage), kangha (a small wooden comb that Sikhs are supposed to carry in their hair under their turban all the time) and a sundar gutka (which is a holy book that contains daily prayers of Sikhs). Then a red scarf is placed around the neck of the groom and dried dates are placed in the groom's hand. 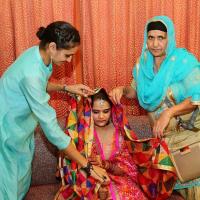 Mehendi is another important event in the bride's journey from 'Miss to Mrs'. This ritual is performed a day before the wedding on the hands and feet of the bride. It is considered an auspicious start to the big day. It also holds medicinal properties. The cooling effect of the henna helps overcome the stresses and relaxes the muscles. In the elaborate mehendi design of the bride, the groom's name is hidden which he has to find at their first night together.

Chooda ceremony is the first ritual that is performed on the wedding day. It includes a set of 21 red and white bangles that are gifted to the bride on the day of the wedding by her maternal uncle and aunt (mama ji and mami ji). A ritual is performed by the priest, who put the choora in milk and rose petals, and then put it on her wrist. Later, sister of the bride ties kaleeras on the wrist of the bride.

After chooda ceremony, the priest ties a red thread on the left wrist and feet. The seven knots are tied by seven married women and it is considered to protect the dulhan from the bad omen.

Also Read: Significance Of 'Haldi' Ceremony; 10 Reasons Why It Is Important For Soon-To-Be Bride And Groom

Maiya ceremony is referred to as the cleansing ceremony, wherein, the groom's family bring, solah shingar for the bride and they made her sit on a stool and oil is applied on her hair. And the rest of the females of the family sing traditional wedding songs known as badhaiya or tappe. 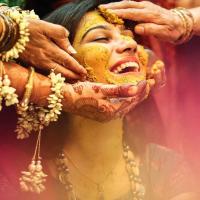 After the Maiya ceremony, the bride's family performs the haldi ritual. In which haldi is applied to the bride by seven married women first, and then they feed her meethe chawal. 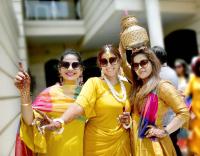 Once the haldi ritual is over, the bhabhi (sister-in-law) of the bride visits a nearby Gurudwara with an earthen pot called Gharoli and fills it with holy water. This is the water that is used to bathe the bride after the vatna ceremony. 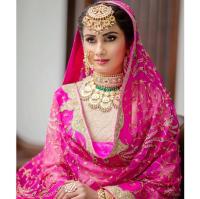 The Punjabi bride traditionally wears a Punjabi suit called patiala in a deep red or pink colour, but nowadays, it is replaced by lehengas. Her look is completed with choora, kaleere, a maang teeka, and a necklace.

Milni ceremony is the start of the wedding. The bride's family welcomes the groom family with gifts, garlands and warm hugs. Mostly men participate in the milni ceremony held at the Gurudwara.

The bride then enters the Gurudwara under the phoolon ki chadaar with her brothers and sisters. While brother holds the chadaar, the sisters escort her to the venue where the groom is waiting for her.

Anand Karaj ceremony is the wedding ceremony that is held in front of Guru Granth Sahib. The bride and groom sit next to each other facing the Granth Sahib ji and the ardaas is offered to 'Waheguru'. Later, the bride and groom are informed about their roles and duties they are entitled to and the idea of living a pious life according to Sikh tenets. The couple then bows down and the father of the bride places a saffron-coloured scarf on the shoulder of the groom and the other end is placed in the hands of the bride. 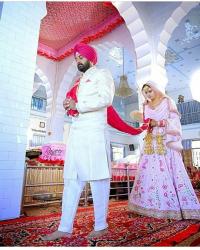 The Lavaan Phere are the four prayers chanted as the couple takes pheras around the Guru Granth Sahib ji. The four wedding hymns of the Lavaan are denoted by the four stages of love. It describes the love between a husband and a wife and their love for God. The ceremony ends with the final prayer and distribution of kada prasad. 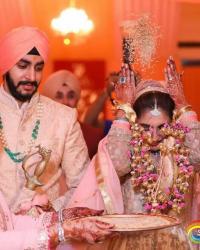 After the wedding rituals are completed, the bride changes into the outfit gifted by her in-laws and bids goodbye to her family moving forward to make her own world.

The journey of a Sikh bride is filled with a bucket full of emotions. Every ceremony holds a deeper meaning than just another sets of hashtags. She takes with her the preaching of her mother and the pride of her father to make another world of her own. After brightening her mother's place, now, moves on to brighten another and nurture it with her love.

Don't Miss: 15 Hottest Grooms We Found In Sikh Weddings Who Clearly Prove That 'SINGH IS KING'