Hardik Pandya took to his Instagram handle to post some adorable clicks with his beautiful wife, Natasa Stankovic. Check it out inside! 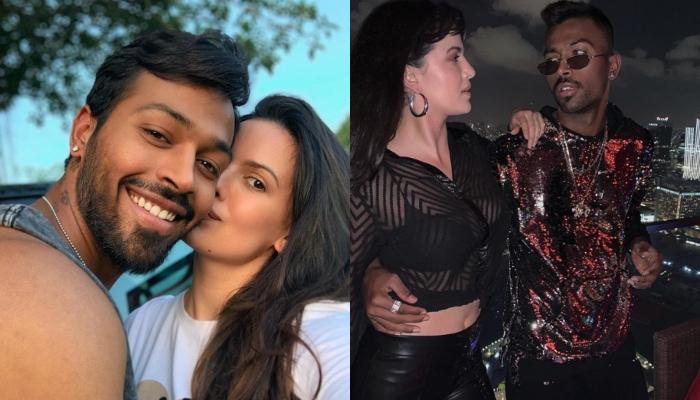 We might have not seen much (or any) action on cricket grounds this year, but speaking of the personal lives of Indian cricketers, there has been a lot! From Suresh Raina welcoming her baby boy, Rio in his life, to Hardik Pandya getting engaged to Bollywood actress, Natasa Stankovic, on new year's eve, a lot of pleasantly unexpected things have happened this year! After the surprising news of their engagement, Hardik had shocked his fans with another major bomb. (Recommended Read: Riddhima Kapoor Sahni Shared An Age Old, 'Classic' Unseen Picture Of Rishi Kapoor With His Siblings)

Cricket fans had gotten a huge surprise on May 31, 2020, when their favourite all-rounder, Hardik Pandya had announced the soon arrival of a junior 'Pandya' in his life! The lovely couple of Hardik Pandya and DJ wale babu fame, Natasa Stankovic had made headlines recently when they had announced the news of their marriage and pregnancy. The couple had taken to their respective Instagram handles and had shared an array of pictures with each other. Hardik had captioned them as “Natasa and I have had a great journey together and it is just about to get better. Together we are excited to welcome a new life into our lives very soon. We’re thrilled for this new phase of our life and seek your blessings and wishes."

Hardik Pandya took to his Instagram handle on June 18, 2020, to pour love on his wife and life partner, Natasa Stankovic by sharing some beautiful pictures together. The first picture is a selfie in the car, for which both of them are smiling radiantly and looking gorgeous. The second picture is a mirror selfie in which we can see Hardik and Natasa complimenting each other, twinning in black as Natasa leans on her hubby. The third and the cutest picture entails the 'happy love' between the couple as Natasa and Hardik cuddle their pooch on the bed. Hardik put a sweet caption alongside the pictures which can be read as "Happiness in life." Take a look at them below:

Talking about Hardik Pandya and Natasa Stankovic's love story, he had opened up about the same in an interview with crickettimes.com. He had spilt beans on his first meeting with Natasa Stankovic and how they had started dating. Speaking about it with cricket commentator, Harsha Bhogle, Hardik had stated, “I got her by talking. She saw someone in a hat at a place where I met her, wearing a hat, a chain, a watch, at 1 am. So she thought he is ‘alag prakaar ka aadmi aaya’ (different kind of person came).”

When asked whether Natasa was a fan of him, the cricketer had retorted, “She had no idea who I was.” He had also talked about his parent’s reaction on their engagement and revealed, “My parents also didn’t know that I was getting engaged. Two days before (the engagement), I told Krunal. I told him, ‘I have had enough. I have found someone in my life who I love, and I am becoming better’. They (family) backed me and told ‘do whatever you want." (Also Read: Raghu Ram Gives Wife, Natalie Di Luccio A Haircut, Shares Hilarious Photo Announcing His War On Hair)

Some time ago, Natasa Stankovic had taken to her Instagram handle to share a picture with her hubby, Hardik Pandya and their cute pooches. In the picture, Natasa could be seen flaunting her baby bump in her teal green dress, while her hubby, Hardik could be seen in an all-black outfit, sitting on a table, holding his two cute pooches, as their third pooch was sitting between the couple. The picture had made for a perfect family portrait. Check it out below. (You May Also Like: Ankita Lokhande Had Never Left Upset Sushant Singh Rajput's Side Till He Smiled, Vikas Gupta Recalls)

How do you like the jodi of Hardik Pandya and Natasa Stankovic?