Television actress, Debina Bonnerjee got a haircut from her husband, Gurmeet Choudhary and the outcome will astound you. Scroll down to check it out! 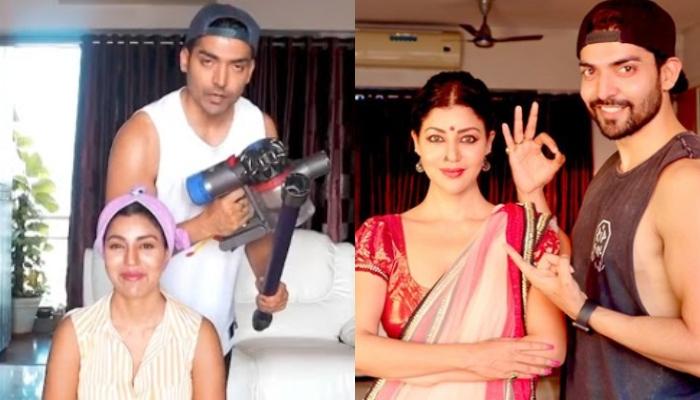 Gurmeet Choudhary and Debina Bonnerjee had played the protagonists in the super popular show, Ramayan. They had grabbed the limelight with their amazing chemistry when they had portrayed the role of Ram and Sita in the show. Their fans had wanted to see the reel-life couple becoming a real-life couple and their wish was fulfilled, as the couple had tied the knot on February 15, 2011, and since then, they have been giving some major relationship goals. (Recommended Read: Saroj Khan's Daughter, Sukaina Khan Remembers How Her Mother Was A Fighter And Would Never Give Up)

As the world is suffering from a global pandemic and people are afraid to go outside, they're resorting to 'home-made solution' to their problems! Yes, and what better, funnier, and kind of an adventurous solution for hairstyling, than getting a haircut from your husband! Television actress, Debina Bonnerjee got a haircut from her husband, Gurmeet Choudhary and the outcome will astound you. Don't believe us? See for yourself!

Debina Bonnerjee took to her IG handle on July 4, 2020, to share with her fans a glimpse of her haircut seesion given to her by her husband, Gurmeet Choudhary. Debina posted a full video of the same and captioned it as "As you can see the audacity that I have. I got my haircut by my husband shree @guruchoudhary the multitalented actor husband barber. I bet I you will be on the edge of your seat while watching this full video on #debinadecodes. LINK IN BIO." Check out the video below:

Debina Bonnerjee's birthday was on April 18, 2020, during the lockdown, but her husband, Gurmeet Choudhary, had left no stone unturned to make it special. He had taken to his Instagram handle and had posted a video from his wife, Debina's birthday celebrations. In the video, we could see their whole family around the birthday girl, her siblings, cousins, friends, and others on video calls. The beautiful couple could be seen twinning in black, as Gurmeet had held their little puppy in his arms while Debina had cut her birthday cake with a huge smile and a loud cheer from her family and friends. Along with the adorable video, Gurmeet had written a heartfelt note for his wife which could be read as "Happy birthday my love @debinabon a unique birthday celebration with the technology bringing us together all of us (my family) from out of the station as well as friends who are staying in Mumbai in different houses were present in Debina's cake cutting session at our house."

Gurmeet Choudhary and Debina Bonnerjee are both fitness freaks and are spotted working out together numerous times. They are the living embodiment of the phrase: 'Couple that works out together stays together'. Debina had taken to her Instagram handle and had shared a video of their workout session and in the video, the couple could be seen lifting each other instead of weights. Debina had captioned it as "Not only couples who eat together, sleep together stay together but couples who work out together Can stay happily ever after ....power couples can actually lift each other up (here literally). Don't go by my face I m strong within and proud. @guruchoudhary #couplegoals #mondaymotivation." (You May Also Like: Bipasha Basu And Karan Singh Grover's Chemistry In This Monochrome Picture Will Skip Your Heartbeat)

Debina Bonnerjee had once recalled how their friends were responsible for brewing up their love story! In her words, "I came to Mumbai in 2006 for a talent hunt contest and met Gurmeet there. He was also among the top 30 contestants. That's when I saw him for the first time, but then, we were just friends. Later, when I shifted to the city, he helped me in settling down. He was my roommate's boyfriend's friend, and he always used to come along with his friend to our place. While they both chatted, I and Gurmeet used to spend some time together and this went on for days. After a couple of months, my roommate's boyfriend shifted to some other place, and thus he too stopped coming. It was then that we started missing each other and felt that we shared a bond." (Also Read: Aditya Pancholi Denies Sooraj Pancholi's Rift With Sushant Singh Rajput, Says 'They Were Brothers')

Did you like the haircut given by Gurmeet Choudhary to his darling wife, Debina?