When two people separate, they try their best to not cross path but things were totally different for Vishal and Madhurima as they deliberately decided to take part in 'Nach Baliye 9' as an ex-couple. Put Your Hands Up, Put Your Hands Up, Like You Just Don’t Care Coz It’s Nach Baliye, Na Sharma Mere Maahi, Duniya Ki Na Soche, Nach Baliye, Lootege Wah Wahi, Chal Rang Jama De, Nach Baliye… like the show and real-life partners dancing with one another wasn’t enough to make us hooked onto our TV screens over the weekend! Wondering why do we say so? It is because of the new format of the show wherein ex-couples too, performing with one another on Nach Baliye 9 that makes the wait begin from Monday itself! And while most ex-celebrity couples have made their peace with one another on the show, it is Vishal Aditya Singh and Madhurima Tuli’s irreconcilable differences that never fail to make headlines. (Do Read: Mira Rajput Kapoor Is Completely Smitten By Hubby, Shahid Kapoor's Looks, Leaves Steaming Comment)

It was early last year when Chandrakanta co-stars, Vishal Aditya Singh and Madhurima Tuli had confirmed their separation with one another. When two people separate, they try their best to not cross path but things were totally different for Vishal and Madhurima when they deliberately decided to take part in Nach Baliye 9 as an ex-couple. From ugly spats on the sets and stage to their choreographer, Sanam Johar having a hard time making them reconcile and practice, admit it or not, it is this couple and their activities that we really await to witness over the weekend.

Nach Baliye 9 is airing on Star Plus and its Instagram handle often contains glimpses of the upcoming episode in the form of teasers. In the similar lines, a latest video posted by the channel’s Insta page has a snippet of Govinda as the guest judge, giving out a shocking comment for Madhurima and Vishal, cutting judge, Ahmed Khan midway. This is what he was heard as saying, “I think this kind of love is zabardasti wala pyaar jo aap par thopa jata hai. Aur jab aisa pyaar thopa jata hai wahan log 36 jagah muh maarte hain and mujhe aise logo se nafrat hai.” Here's the video:

In an interview, Vishal Aditya Singh had shared about his breakup with Madhurima Tuli in an interview, “Our thoughts don't match at all. I have worked with her in Chandrakanta. She is on some other tangent all the time. I am a person who truly believes that no one is perfect, and one has to accept the person the way he or she is. And somewhere I knew it’s not the case with her, so going ahead it will create a lot of issues between us. And with such things, we can't enjoy our work.” Commenting on this, Madhurima Tuli had stated, “He feels that whatever he says is right and he need not listen to what I am saying. If you want to be with me, then you ought to change. You can't say 'I still loved her but don't love her anymore'. I am trying to identify the point that we have our issue on but he is not ready to understand my perspective.” (Also Read: Faisal Khan Reveals If He Has Ever Lost Patience With Non-Dancer GF Muskaan Kataria On Nach Baliye 9)

Madhurima Tuli was also asked if she is ready to reunite with ex, Vishal Aditya Singh provided he changes for the better? To this, she had answered, “The way he has behaved till now in Nach Baliye 9, do you really think that I should go back to him? If I do, I will land up in a trauma. I will go into a depression.” If she had kept a small window open for reconciliation when Nach Baliye 9 began, Madhurima revealed, “I had. I felt for him till then. But not anymore. I don't think I can get back with him ever.”

Rumours were rife for a while that things are not brewing fine between the now estranged lovers, Vishal Aditya Singh and Madhurima Tuli. In spite of trying hard to mend their relationship, the couple went on mending their own separate ways. In an interview with SpotboyE, Vishal had confirmed the news about his breakup and had shared, “Yes, I have broken up with Madhurima but would not like to comment any further on it.” When further asked about the reason behind things going kaput for the couple, Vishal chose to remain mum. Meanwhile, Madhurima too had confirmed the news of her separation with her boyfriend in an interview and confirmed the news by saying, “It’s true that we are no more together. I do not want to comment any further. Thank you.” (Also Read: Arjun Rampal Goes On A Dinner Date With GF, Gabriella Demetriades and Her Parents, He Looks So Happy)

Vishal and Madhurima had met on the sets of the show, Chandrakanta and reportedly, had developed a strong liking for each other. In an interview earlier this year (March 2018), an all-elated Vishal said this to India Forums about their relationship, “Yes, we are dating and are trying to know each other. For now, we are spending time with each other because I believe in love and care. It has been 3-4 months since we got together." And what made him fall for her? He had said, "I like the way she carries and presents herself."

Guys, how excited are you to watch what Govinda actually means to say? 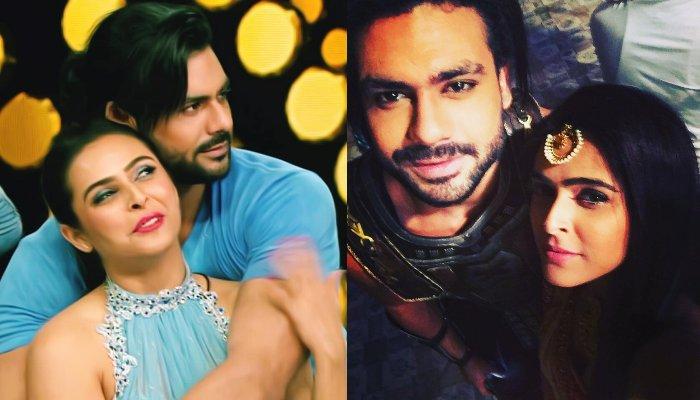