Television actor, Gautam Rode shared a video of him dancing on the song, 'Main Joru Ka Ghulam' for his wife, Pankhuri Awasthy from their wedding. Take a look! 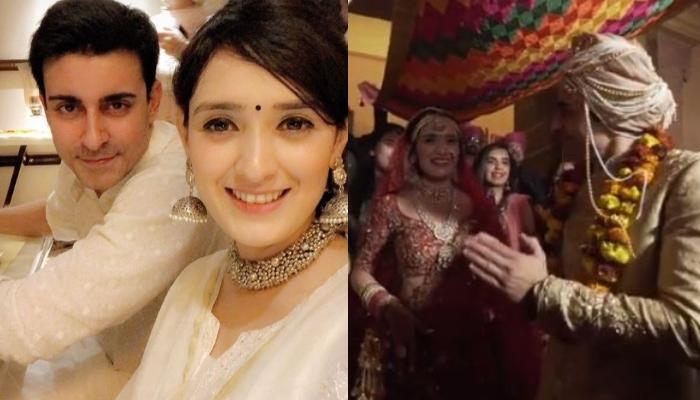 From their wedding teasers to their honeymoon pictures, their journey of love is nothing less than a fairy tale. The much-in-love couple that has reinstated our faith in true love despite having a huge age gap of 14 years is none other than Gautam Rode and Pankhuri Awasthy. The couple had never let this age gap come between their beautiful relationship and has given a strong reply to all those people, who were doubting their decision of marrying each other back in 2017. It’s been a long time, but it feels like the couple married yesterday because that is the kind of vibe we get from this beautiful couple every day through their respective Instagram feeds. (Recommended Read: Sunny Leone Opens Up About Moving To The US With Her Husband And Kids Amidst The COVID-19 Pandemic)

Now the doting hubby, Gautam Rode and his beautiful wife, Pankhuri Awasthy are again in headlines as he has uploaded a small video from their wedding night. In the video, we can see Gautam dancing on the tunes of Main Joru Ka Ghulam in front of his wife. Scroll down to see the adorable expressions of Pankhury seeing her hubby, Gautam dancing on his iconic song.

On June 4, 2020, television actor, Gautam Rode took to his Instagram handle and posted a beautiful video from his wedding archives. The adorable video is from Gautam Rode’s wedding with his wife and television actress, Pankhury Awasthy. In the video, we can see Gautam dancing on the tunes of the iconic song, Main Joru Ka Ghulam Banke Rahunga from the hit-film, Joru Ka Ghulam. The actor is looking handsome in his wedding outfit as he dances in front of his wife, Pankhuri Awasthy, who had looked gorgeous in her traditional bridal outfit. Along with the video, Gautam wrote a simple caption that can be read as “Main Joru ka Ghulam ban ke rahoonga @pankhuri313.” Take a look. (Don’t Miss: Are Asim Riaz And Himanshi Khurrana Engaged? Suggests The Huge Diamond Ring In Her Ring Finger)

This isn’t the first time when Gautam Rode has delighted his fans with these sorts of unseen and beautiful moments of him with his wife, Pankhuri Awasthy. On May 31, 2020, Gautam Rode had taken to his Instagram handle and had shared a heartwarming video from their engagement ceremony. The video will bring a smile on your face at the beginning and will leave you with some happy tears right at the end of it. Along with the video, Gautam had shared his emotions during their engagement and how overwhelming it was for them at that time. His caption could be read as “Engagement Ceremony. We were so busy with preparations during the days that preceded our wedding, that it only sunk in now during the engagement ceremony that we were getting “Married” The feeling was overwhelming! @pankhuri313.” Take a look.

For the uninitiated ones, Gautam and Pankhuri had met each other on the sets of their famous show, Suryaputra Karn, and had gradually become friends. But slowly and steadily while working together, their friendship had turned into love. Well, there were a lot of people, who had talked about the age gap of 14 years between them. But as it is rightly said, age is just a number when one is in love! The couple has proved their madness for each other on a lot of occasions and interviews. It will be fair to say that they’re one of the cutest and sought-after couples of the television industry.

Gautam Rode had once revealed in a media interaction, why he was not talking about his relationship earlier and had said, “The engagement isn’t a secret anymore. Everyone knows about it now. The intention was never to keep it a secret. I have always believed that there is no point of talking about something until you know which direction it is going to go in. Once both the families got involved, we got engaged, I did speak about it. Now, I know for sure that our relationship is moving towards marriage and hence I am talking about it.” (Also Read: Paras Chhabra Talks About Proposing Mahira Sharma And Removing Ex-Girlfriend, Akanksha Puri's Tattoo)

Do you like Gautam’s dance on ‘Main Joru Ka Ghulam’? Let us know!