Gauri Khan posts a cutesy picture of her favourite boys- Shah Rukh Khan and AbRam Khan sharing a lovely time together and dressing up like the Native Americans. If daughters are made up of sugar and spice, then we are definitely sure that baby boys are definitely made up of a little bit of mom’s heart and a lot of dad’s mischief. Don’t believe us? Well, Bollywood superstar, Shah Rukh Khan’s little tot, AbRam Khan is a perfect example of it. He was the first obsession of the paparazzi before Taimur Ali Khan entered the scene (we bet you know what we mean!). (Recommend Read: Deepika Padukone Wants Ranveer Singh To Come Home On Time, Reveals The Real Reason Behind It)

While we all know that AbRam is the most favourite kid of papa Khan, who re-lives his own childhood days with him. In fact, we have often seen Shah Rukh Khan twinning with his ball of wonders. The actor had often referred AbRam as his little prince. And last year, in an Instagram post he called him the ‘happy prince’ and explains it in the caption that reads, “For all the sons of the world... If your Mama is your Queen then there is no stopping you from being The Happy Prince (and an iPad loaded with games helps too).

Recently, the Queen of Khan-daan, Gauri Khan took to her Instagram handle to share the 'aww-dorable' bonding of the father-son duo. She posted a picture of Shah Rukh with son, Abram, sporting Native American headgears with complementing attires, and captioned it as, “Courchevel. The winter playground.” Take a look at the picture below: (Also Read: Karanvir and Teejay's Twins- Vienna And Bella Host Holi Bash, Kashmera, Chahatt Attend With Kids) 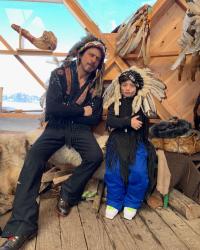 SRK, who is in awe of his little boy, had shared a super-cute wish for his 5th birthday on May 28, 2018. He opened up his heart and wrote, “My sunshine turns 5 yrs today but he thinks he is 9! Please don’t tell him otherwise if u meet him. Children should hear their own music, sing their own songs & believe in their own lil dreams...& yeah, hug their papa a lot.” 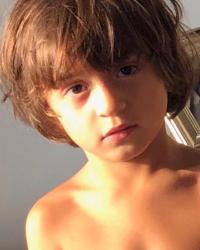 In a throwback interview with DNA, Shah Rukh had talked about his family. He had shared, “I’m not very inquisitive or gossip about people’s lives, including my children’s. If they want something, they will just give me a call. Sometimes, they talk about their personal lives, but I know they limit what they tell me. It’s about aankh ki sharam. I don’t pry too deeply. I see the mom (Gauri) and the kids talking, and she asks some really pointed questions, and I’m like, ‘How can you ask them this?’ They may answer or say, ‘I don’t want to tell you’."

He had further added, "I don’t ask anyone questions about their life — whether it’s my children or anyone else. I don’t like being pried on either. I can tell you a lot of generic things about myself, but my personal feelings are extremely private. So, I assume the same about others, my children even more because they would have the same structure of DNA that I have. But they do come and ask me things, sometimes about studies and sometimes some really strange things about life.” (You May Also Like: Shoaib Malik Is Missing His Baby Boy, Izhaan, Shares Adorable Pictures Of Him Giggling With His Dad) 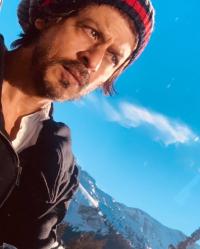 In the same interview, he also had opened up about his relationship with AbRam, and had revealed, “AbRam is extremely protective of me. There are times he watches somebody hit me on screen and he thinks it’s for real. So, the next time he meets them, he gives them dirty looks. He did that with Kajol after Dilwale because of that one scene during the interval. We even went for that Ra.One ride together in Dubai and he was getting little angry with Nawaz bhai after seeing Raees. Otherwise, he’s a total chiller." 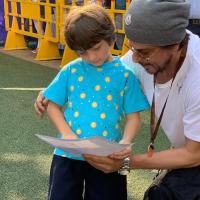 He had also shared, "I think he loves being around me. Unlike Suhana and Aryan, he is more people friendly. He gets happy seeing my fans. On my birthdays, he would just come out to the balcony every hour. The fans keep screaming my name and he comes running to me and says, ‘Papa, peoples have come. Let’s go meet them’. He calls them ‘peoples’ and then, he drags me out because he enjoys waving out to them. He’s a smart, intelligent kid and extremely fun to be with. And with him, I become a kid myself.“ (Don't Miss: Sameera Reddy Already Senses It's Going To Be Baby Girl This Time, Universe Sends Her The Signs)

Well, we totally love Shah Rukh Khan and his little tot AbRam Khan! What about you?