Did Gauahar Khan Get Engaged To Zaid Darbar In Goa? She Flaunts A Sparkling Ring On Her Ring Finger

Did Gauahar Khan Get Engaged To Zaid Darbar In Goa? She Flaunts A Sparkling Ring On Her Ring Finger

After a lot of wedding speculations of Gauahar Khan and Zaid Darbar, the sparkling ring on Gauahar's hand has made us wonder if the two have exchanged the rings in Goa. Pictures inside! 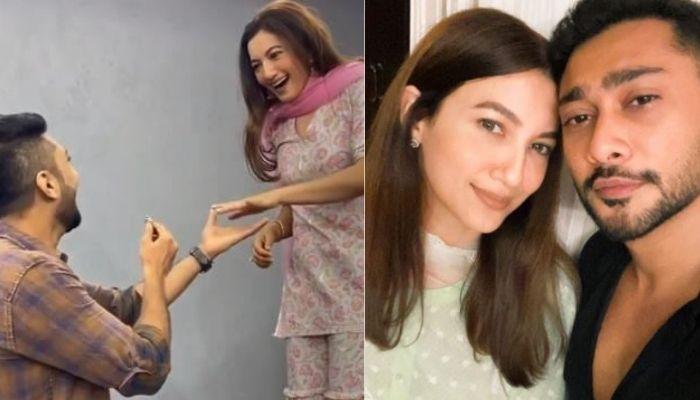 The wedding season is officially here and our favourite celebrities are surprising us with the sudden news of their engagement and wedding. The celebrities are keeping their roka and engagement ceremony a low-key event and after announcing their wedding, share details about the same. From some time, there have been rumours about Gauahar Khan and Zaid Darbar’s relationship and that the two might soon tie the knot. However, the two haven’t confirmed anything yet, but the sparkling ring on Gauahar Khan’s hand says a lot! (Also Read: Kareena Kapoor Khan Flaunts Her Baby Bump As Son, Taimur Enjoys Halloween Party At Home [Pictures])

Post coming back home after her stint in Bigg Boss 14, Gauahar Khan had celebrated her alleged beau, Zaid Darbar’s birthday and later the two had headed to Goa. The two were constantly posting pictures and videos on their IG stories, sharing glimpses of their Goa holiday. On October 27, 2020, Zaid had to his Instagram handle and had posted cute pictures with his favourite girl, Gauahar. In the pictures, we could see Gauahar looking gorgeous as usual in a white top teamed with blue-striped shorts. On the other hand, Zaid had looked dapper in a printed shirt and glares. Alongside it, he had written a hilarious caption, which could be read as "When a girl asks you for a pic: Expectation, Swipe Left for Reality. #Forceful Posing LOL!"

As Gauahar Khan has started posting pictures from her Goa holiday with alleged beau, Zaid Darbar, her recent pictures caught our attention. On November 2, 2020, Gauahar took to her IG handle and shared two pictures, which have led us to speculate her engagement. While in the first picture, Gauahar can be seen showing her palm to the camera, in the other picture, Gauahar can be seen sitting on the bench with a chic pose. However, it was the sparkling ring on her ring figure that caught our attention, leaving us wondering if Gauahar and Zaid have exchanged rings in Goa! Take a look at the pictures below:

A few hours ago, Gauahar also posted a picture on her IG handle with a ‘follow me’ pose. In the picture, a flower has been strategically placed on her ring figure, giving more validation to speculation of her engagement with Zaid Darbar. While, one look at the picture, we can speculate that it is a man’s hand and most probably, Zaid’s hand that Gauahar is holding, however, Gauahar asked her followers to guess the same. Her caption can be read as “Say whatttttttttttttttttttt???? mere haath mein tera haath hai , saari jannatein mere paas hai ! #FilmyHainHum .... batao kiska haath hai ?”

Talking about the wedding rumours of Zaid and Gauahar as per reports in ETimes, the plausible date of Gauahar Khan and Zaid Darbar's marriage is November 22, 2020. Sources had told the portal that the families have finalised this date, and their relatives are already flying down to Mumbai. As per reports, Gauahar Khan's sister, Nigaar Khan and others will come down next month. The families have started the preparations for the wedding. It will be two-days, intimate ceremony with close family members and friends in attendance. (Don't Miss: Suhana Khan Wishes Her 'BFFs', Shah Rukh Khan And Shanaya Kapoor On Their Birthday)

In an interview with ETimes, Zaid Darbar's father, music composer, Ismail Darbar had talked about his son's marriage speculations with his alleged GF, Gauahar Khan. The doting daddy had also stated that Gauahar had come to meet them a few days back and all his family members had liked her. He was quoted as saying, "Gauahar was with us for nearly 4 hours; we had a biryani dinner together. If the vibes are not good, I don't think one can sit for more than 4 minutes with anybody in today's times. My son Zaid has told me that they are serious about each other. I have absolutely no objection. As a father, I did tell him once that she is 5 years older than him, and make sure that this is real love before you take the plunge into matrimony." (Recommended Read: Allu Arjun And Sneha Reddy's Kids, Ayaan And Arha Turn Pennywise And Evil Nun For Halloween Night)

We hope that Gauahar and Zaid come out in public and accept their relationship!