Our Bollywood and television celebs are not stopping at all and every day we are getting to know about one or the other celeb’s wedding. After Deepika Padukone-Ranveer Singh’s wedding, Bollywood buffs are waiting for Priyanka Chopra-Nick Jonas’ wedding. And now, we have another pretty silver screen actress who is tying the knot soon. It’s none other than international sensation and Slumdog Millionaire fame, Freida Pinto.

Before telling you who the lucky guy is, let us share some love details about Freida. It’s been a long-time, Freida keeps hitting it to the headlines for her personal life. After being in a 6-year-long love affair with her Slumdog co-star Dev Patel, the two parted ways in December 2014. Two years after that in 2016, Freida was rumoured to be dating a polo player named, Ronnie Bacardi, but soon that fizzled out. (You May Also Like: Sushmita Sen's Boyfriend Rohman Shawl Calls Her 'My Jaan' In His Warmest Birthday Wish For Her) 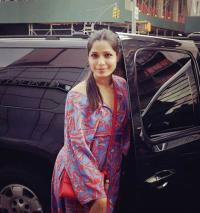 Now, coming back to Freida’s new-found love and that lucky guy. Well, Freida has now found love in an adventure photographer named Cory Tran. And the good news doesn’t end here! Freida and Cory are so much in love with each other that they might get hitched in 2019, if reports are to be believed. Also, let us tell you who played cupid between the two! Well, the one to thank for this amazing jodi is Cory Tran’s bestie & Freida Pinto’s co-star Aaron Paul of Hulu Series The Path. (Checkout: Chahatt Khanna Reveals Estranged Beau Farhan Mirza Accused Her Of Prostitution And Dating A Co-Star) 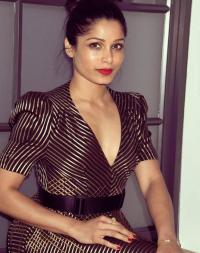 Thanking Aaron and wishing Freida on her birthday on October 19, 2018, Cory took to his social media and shared a picture of the birthday girl. Along with the snap, he wrote, “Today is the day you were born. The year anniversary of when we met. The day I found my person. Happy Birthday Monkey! I love you. #ThanksAaron”. Here’s the picture he had shared then:

In fact, Cory recently took to his official Instagram page and shared a dreamy picture of Freida. He captioned it as, “The best adventures are with her”. In another post of his, he captioned a few snaps of Freida as, “With her, on a dock, dancing”. With another one, he wrote, “Slow mornings, are the best mornings”. (You May Also Like: Arbaaz Khan And Giorgia Andriani Arrive With His Step-Mom Helen At Lux Golden Rose Awards 2018)

In 2017, Frieda in an interview with People’s Magazine had talked about her love affair. She had expressed her feelings and said, “I think I love myself. I’m having like this crazy love affair with myself... If you don’t know how to learn to love yourself, you will find being single extremely hard. When you do that, I don’t think you feel lonely.” (Suggested Read: Nick Jonas Shares He Was Diagnosed With Diabetes At 13, This Is How Priyanka Chopra Reacted) 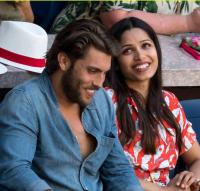 Freida Pinto is amongst those celebrities who have been quite frank about their relationships. Whether it was about her relationship with co-star Dev Patel or her passionate kiss with professional polo player Ronnie Barcardi, Freida has always aced the PDA game with her beaus. Coming to Freida and Cory, the two of them made their relationship official at the red carpet of Oscars 2018.

Wishing her all the very best for the new phase of her life!