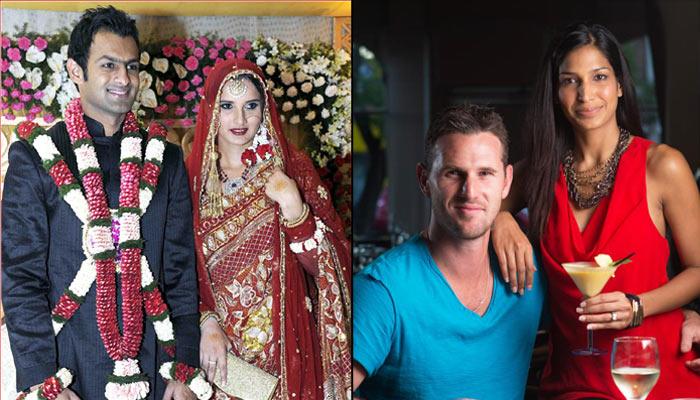 If two people are destined to be together, the two will eventually find their way to each other crossing the barriers of distance, age, religion or language. This is something that’s been proved over and over again by famous celebrities who have got married to foreigners. But did you know that there are many foreign cricketers who tied the knot to gorgeous Indian women? Here we bring you a list of 8 such cricketers who either dated or married Indian women.

One wedding that created a hurricane of anger as well as joy in the country was that of Pakistani cricketer Shoaib Malik and ace tennis player Sania Mirza. She was earlier engaged to her childhood friend, but broke it off. She later fell in love with Shoaib and married him. There were speculations of him being already married to a girl from Hyderabad too. The two have been happily married for about four years now.

Though the two never got married as Sir Vivian was already a much married man, they never thought there was any need to keep their relationship under wraps either. The two also had a daughter together, the much famous fashion designer, Masaba Gupta.

Here is the Edgy Bride: Style Inspiration You Can Steal From Masaba Gupta For Your Wedding

One of New Zealand’s ace cricketers, Glenn Turner got married to Sukhinder Kaur in 1973. The lady is also popularly known as Sukhi Turner and has been an important political figure in New Zealand up till now. The couple are proud parents to two wonderful children.

Recommended Read: 20 Signs That Say The Honeymoon Phase Of Your Relationship Never Ended

One of the only Asian batsmen to score 100 first class hundreds, ace Pakistani batsman Zaheer Abbas met Rita Luthra in UK, where she was perusing her degree in interior design, while he was playing for the English county Gloucestershire. After marriage, Rita changed her religion and became Samina Abbas. The two now stay in Karachi and Samina runs a successful interior design business there as well.

Also Read: 8 Things Every Girl Would Love To Steal From Her Mother's Closet

The highest wicket taker in test and One Day Internationals, the biggest fear of every batsmen and a legendary player from Sri Lanka, Muttiah got married to Chennai girl Madhimalar who happens to be the daughter of Nithya and S. Ramamurthy, the owners of Malar hospitals. The two have a son who was born in 2006.

Australian cricketer Shaun Tait got married to Indian model Mashoom in 2014. The two dated for some time and Tait popped the question to her in Paris where the two were on vacation. Their wedding took place in Mumbai and was attended by their close friends from Australia and Mumbai.

Must Read: Chinese Twin Brothers Married To Twin Sisters Go For Plastic Surgery For Reasons That Will Shock You

One of the greatest captains of England cricket team that we have ever seen, Mike tied the knot to his Guajarati wife Mana Sarabhai, daughter of famous industrialist Gautam Sarabhai and took Guajarati lessons for almost four years. Today, the two are settled in London and have two children.

Also Read: Relationship Hacks- 15 Clever Ways To Be The Perfect 'Daamad' To Your Wife's Parents

It was hard for Mohsin to resist the beauty and charm of Indian actress Reena Roy. The two got married after which, he himself acted in a couple of Bollywood films. The two also have a lovely daughter but unfortunately their marriage did not last long and ended in divorce. Reena Roy was in fact rumoured to be dating Sonakshi Sinha's father Shatrughan Sinha once upon a time.

Love does not see the barriers of language or religion. If it has to happen, it will and that’s what all of the above-mentioned couples beautifully prove.