Shibani Dandekar and Farhan Akhtar have now become an 'IT' couple of the Tinseltown. Now, they have left for their vacation along with Farhan's daughter. Checkout the pictures inside.

Pyar dosti hai…agar wo meri sabse achi dost nahin ban sakti toh main use kabhi pyar kar hi nahin sakta… And so every love story starts with the bond of being best of friends. Who says love doesn’t knock your door the second time? Bollywood actor-singer, Farhan Akhtar is the live example to prove the same. After his failed marriage with Adhuna Bhabani of 17 years, he found solace in Indian singer, actress, anchor and model, Shibani Dandekar. (You May Also Like: Unseen Picture Of Pooja Batra And Nawab Shah From Their Pre-Wedding Function, Look Royal Together)

Their love story too started off with a casual friendship, but they didn’t know that love flame was all set to erupt between the two. Ever since Shibani and Farhan indirectly made it official by sharing their couple pictures on social media, they have become the ‘IT’ couple of the Tinseltown. Right from their mushy captions to their cheesy comments on each other’s posts, Shibani and Farhan’s love for one another is growing fonder with each passing day.

Though Farhan and Shibani have never given any official statement regarding their relationship, they have been painting the town red with their love on social media and the romantic getaways they opt for. In fact, speculations have been rife that the two might take the plunge soon. Nevertheless, since their wedding bells are taking their own sweet time to ring, Shibani and Farhan have now left for their romantic getaway yet again. But do you know the interesting part? Well, the lovebirds were accompanied by Farhan’s younger daughter at the airport yesterday (July 15, 2019) evening. Checkout the pictures of the same right here:

Sometime back, a source close to the couple had shared that they are ‘extremely serious’ about each other, “They are extremely serious about each other and Farhan’s kids have also warmed up to Shibani, so this looks like the most obvious step for the two." (Also Check: Anushka Sharma Reveals Why She Married Virat Kohli At The Age Of 29, Quite Early For An Actress)

A while back, Shibani Dandekar spoke to the Mid-Day about her relationship with Farhan Akhtar. Therein, she was quoted as saying, “We are public figures, so people are entitled to say what they want to. But I don't care about their opinion. I'm aware of who I am and I'm comfortable with who I choose to date.” She had further added, “I am not secretive, but I don't feel the need to say things out loud. It's up to me to decide when and what I want to share about my personal life, and it is up to the audience to decide how they look at it. How much information I want to put out in the public domain is my prerogative.”

Talking about their social media PDA, Farhan had once taken to his official Instagram handle and had shared a lovely picture with his ladylove and turned a poet whilst writing the caption. He had worded his post as, "Tum muskuraado zaraa. Chiraag jalaado zaraa. Andhera hataado zaraa. Roshni phailaado zaraa @shibanidandekar.” And in reply to the Gully Boy producer’s post, sharing the same picture, Shibani had written, “I’m not good with the poetry so imma go with ... wedding vibes with my Foo..my sister’s wedding just to be clear!@faroutakhtar.” (Do Read: 'Dance Plus 3' Fame Amardeep Singh Natt Gets Hitched To His Dreamgirl, Chandni (Pictures Inside))

Aren't you guys excited to see the lovely pictures from Farhan and Shibani's vacation with his daughter? Raise your hands if you are! 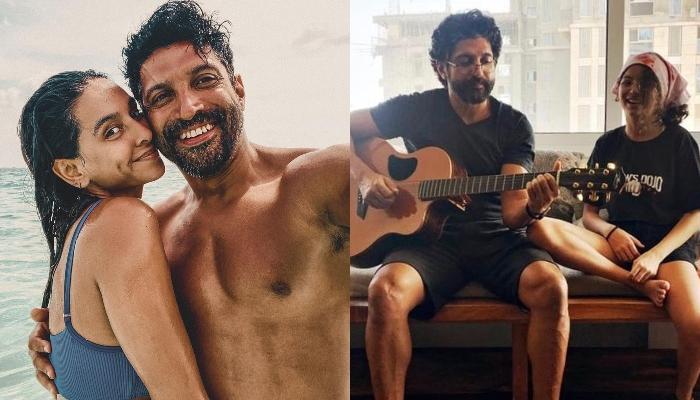