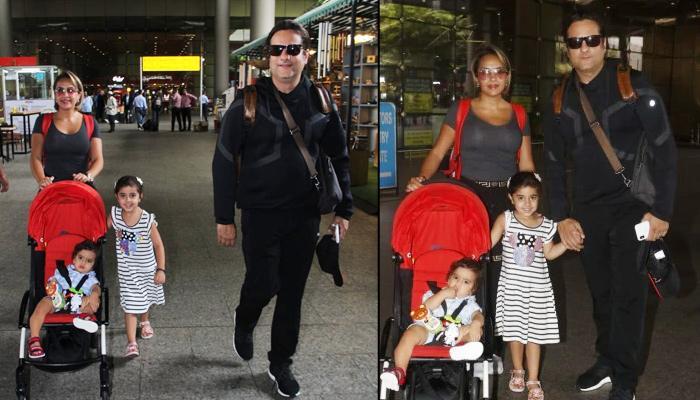 He was one ‘big thing’ in Bollywood at one point in time. His looks and acting skills made girls go gaga over him. But as they say, success and continuing with that success in a place like Bollywood depends on opportunities, hard work and luck. An amalgamation of all the three can make you remain successful in Bollywood. (Do Read: Sanjay Dutt's Daughter, Trishala Dutt Turned 30 YO, Step-Mom Maanayata Dutt Wishes Her On Birthday)

Fardeen Khan has been many directors choice in innumerous movies in the late 90’s and early 2000’s. He ruled the silver screen in the 2000’s but his acting suddenly took a backseat and over time, he stayed put from the limelight. Only two years back, an image of an overweight Fardeen Khan surfaced the internet and he was badly trolled. This was the image:

Giving it back to the trollers, Fardeen had replied by saying, “Not ashamed neither shamed. Not offended. Not depressed. Not blind either. Am I happy? Emphatically! Infact, living the happiest chapter thus far with lbs to show for it. Happy to have been the weekends entertainment for all you trollers. If you have had enough fun please take the time to look at your own reflection. If trolling is what makes you feel better about yourself, you have to seriously think about you future prospects. My best wishes.” (Don't Miss! Neha Dhupia And Hubby Angad Bedi Pose For Dreamy 'Sunkissed' Pool Pictures At Their Honeymoon)

We last caught a glimpse of Fardeen in the 2010 release, Dulha Mil Gaya. However, good news for all fans as Fardeen Khan was recently spotted in the city after a while with his entire family at the airport. And guess what? Looks like the Janasheen actor has really worked on his fitness regime as he looked perfect in a black jacket and trackpants and a man bun. His wife Natasha and two children- Diani, his daughter and baby boy, Azarius were all smiles for the camera until they exited. Take a look at the video here:

Fardeen got married to his long-time sweetheart, Natasha, on December 14, 2005 respectively. For the uninitiated, Natasha is the daughter of 70’s hit actress Mumtaz. Theirs was a dreamy proposal as Fardeen had proposed to Natasha, mid-air on a plane. Here’s a picture from their wedding:

You all will agree that daddies are a little particular about their daughters. Same is what Fardeen feels for his little daughter, Diani. In an interview, Fardeen opened up about the same and shared, “To be honest, it’s the most profound chapter of my life and she has brought life full circle. You value everything that is truly important in your life. You are born to your parents. They bring you up and you love and value them. Then you have your own children, you realise what your parents went through, bringing you up and then you try and teach your daughter everything about life just the way your parents taught you."

Fardeen also spoke about the responsibilities of becoming a parent and raising children. He stated, “If you are not ready for the responsibility, don’t bring life into this world. It is a big, big responsibility to bring life into this world. It’s not a whim or fancy and you have to be truly prepared for it. You have to make sure in whatever capacity you can, you give your child the best opportunities that you can. And more than anything, all they want is your love so you have to give them your time and love. Everything else is secondary.” (Also Read: Sonali Bendre Wishes Her 'Not-So-Little' Son Ranveer Behl On His 13th Birthday, Says She Misses Him)

We agree! Fardeen, it was so good to see you back. We want more of you on the screens soon. Any update on it?