Esha Deol Twins In Black With Hubby, Bharat Takhtani On Their Family Dinner With Her Parents-In-Law

Esha Deol Twins In Black With Hubby, Bharat Takhtani On Their Family Dinner With Her Parents-In-Law

Esha Deol and Bharat Takhtani were snapped by the paparazzi as they smiled together on their family dinner with her in-laws. Bharat and Esha had twinned in black on the dinner night.

You can plan a day when you and your partner can go on a date night. Or maybe just a chilling session at home in your PJs with Netflix streaming and a popcorn bucket beside you. Just a few ‘us’ minutes with your partner a day amidst your hectic schedules, will help you relax and strengthen your relationship. But this ‘us’ time gets way more important after you become a parent. Post-baby, the luxury of ‘us’ time tends to disappear in the delivery room, and it somehow becomes hard to remember what it feels like to be just ‘the two of you’. Looks like Esha Deol and her hubby, Bharat Takhtani are making sure to spend time together, with two kids in the house! (Also Read: Shraddha Arya Feels That Her Fans Are 'Still In Shock' Over Her Dating Businessman-BF, Alam Makkar)

Married on June 29, 2012, Esha Deol and Bharat Takhtani became soulmates for life from being childhood sweethearts. Despite being in different schools, Esha and Bharat would often cross paths in inter-school competitions and the latter had lost his heart to her at the age of 13. After striving hard, little did they know that one day, they will be greeted as ‘mister’ and ‘missus’. To complete their ‘happily ever after’, God has sent them two little angels, Radhya Takhtani (October 20, 2017) and Miraya Takhtani (June 10, 2019).

On August 30, 2019, Esha Deol and Bharat Takhtani were snapped by the paparazzi as they smiled together on their family dinner. Dressed in a black floral dress, Esha looked stunning in her open tresses, black heels and a sling bag to go with it. Twinning with his wife in black, Bharat looked dapper in his monochrome shirt and pants. Esha and Bharat were all smiles for the camera, as they posed with his parents. Here are the pictures (swipe right):

A few days back, Esha Deol had shared a picture with her baby girl, Radhya Takhtani, wherein the little one could be seen gazing at her mother’s ‘teeetooo’. Esha had captioned the post as ““Teeetooo” is what she calls it. my jr checking out my #tattoo #momanddaughter #motherdaughter #mybabygirl #radhyatakhtani.”

On Day 5 of Lakmé Fashion Week winter/festive 2019, Esha Deol and Bharat Takhtani’s soon-to-be two-year-old daughter, Radhya Takhtani, had made everyone’s heads turn with her cuteness at her debut ramp walk. For the Hamleys’ ramp camp at the Lakmé Fashion Week, the showstopper mother-daughter duo had walked hand-in-hand. For the ramp, Esha had looked stunning in denim shorts with a red top and a black leather bomber. Accentuating her look, were those wavy tresses let loose, danglers, black strappy heels and her nude makeup. Her 'not-so-little-anymore' daughter, Radhya had looked like an angel in a top and skirt in the hues of white and pink. And not to miss is the kaala teeka on Radhya’s forehead to prevent her from buri nazar. (Also Read: Chahatt Khanna's Ex, Kanan Malhotra's Epic Reaction To Her Offer To Participate In 'Nach Baliye 9')

Coming back to Esha Deol and Bharat Takhtani’s love chronicle, they had known each other since childhood. Talking about the same, Bharat had once revealed, "I studied in Learner’s Academy in Bandra and she in Jamnabai Narsee School in Juhu. We often met at inter-school art competitions. I developed a huge crush on her. There was a certain freshness and cuteness about her. We began seeing each other."

About their long gap, Esha Deol had stated, “There was a time when Bharat came back into my life after a long gap. It was a long nice gap where movies happened and then he came back at the right time. So, settling down, being someone's daughter-in-law, someone's wife and all of that, so, I am the kind of person who wants to give her 100 per cent into a relationship to make it work. But Bharat and my-in-laws have always been supportive of my work."

Esha Deol had always wanted a love marriage instead of an arranged affair, but not without her parent’s approval. She was once quoted as saying, “If you find someone with whom you’d be able to spend the rest of your life, someone whose face you wish to see before going to sleep and on waking up, then it’s beautiful. I can’t understand the arranged marriage concept; I had to fall in love to get married.” (Also Read: Samantha Akkineni Posts Full Family Picture From Ibiza On Father-In-Law, Nagarjuna's 60th Birthday)

Esha and Bharat twinning with each other is a win! Don’t you think so? Keep us posted! 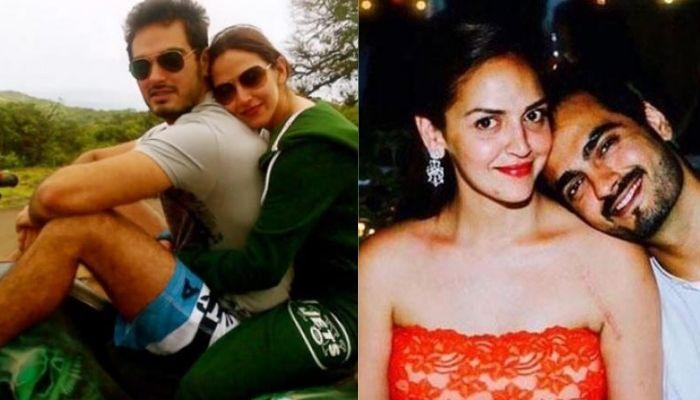 Childhood love is a different kind of emotional luxury that only the luckiest ones of us have access to. Imagine spending your life with someone whom you have known right from the time when you were kids, knowing every little detail about them and loving them to no end. Luckiest