Esha Deol and Bharat Takhtani are proud parents to two princesses, Radhya Takhtani and Miraya Takhtani. Scroll down as Esha gives a sneak-peek into the Janmashtami celebrations with Radhya. She comes all wrapped up like a burrito, and you can’t stop drooling over her button nose, her minuscule hands, her paper-thin fingernails. Moreover, her squeezable and schmaltzy cuteness attracts you like nothing else in this world. Such is the aura of welcoming a baby girl in your life! Famous Bollywood actress, Esha Deol would have felt exactly same when she and her hubby, Bharat Takhtani had welcomed their elder daughter, Radhya Takhtani, on October 20, 2017. (You Mya Like: Kapil Sharma's Pregnant Wife, Ginni Flaunted Baby Bump In Style, Stepped Out To Watch 'Angry Birds')

As blessed as they thought themselves to be, the duo had welcomed their second baby – another princess, Miraya Takhtani on June 10, 2019, right after almost two years. Though we are still waiting to get a full picture of baby Miraya, Esha and Bharat keep showering us with the snaps of Radhya. Remember how beautifully Esha had twinned with her baby bee, Radhya on her first Mother’s Day? It was on May 13, 2018, that Esha had celebrated her first Mother’s Day with Radhya and they had twinned in black and white. Bharat Takhtani had taken to his official Instagram handle to share the picture, which he had worded as “Esha’s 1st Mother’s Day with all the mommies and babies in the house!!! #radhyatakhtani.”

Ever since Radhya’s birth, Esha has been sharing lovely pictures with her. Today, on August 23, 2019, Esha took to her official Instagram handle to treat her fans, giving a sneak peek into the Janmashtami celebrations with her little munchkin, Radhya Takhtani. Esha could be seen wearing a pretty lemon palazzo suit, keeping her hair neatly half-tied, carrying a matching hand embroidered clutch. And not to forget is the swag of little cutie, Radhya, who can be seen wearing a white traditional dress with a pink flower on it. And what added to the little munchkin’s oomph factor was her small white-coloured embellished clutch, having a golden bow atop it. Esha worded her post as “All set for #janmashtami celebrations with my #babygirl #radhyatakhtani.” Hashtagging the post as “#momanddaughter #mommyandme #indiangirls #gratitude.” Take a look: 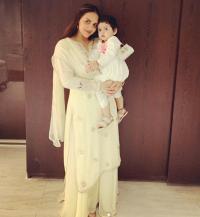 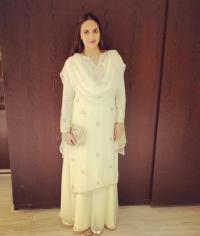 Once, in an interaction with a leading daily, Esha had talked about the sense of delight after becoming a mother to Radhya. The actress was quoted as saying, “Mamma loved doing things for Ahana and me, and today I understand that sense of joy when I dote and fuss over my little one. It is something that makes you feel complete as a mother. Beautiful Radhya fills up my days and nights. Both Bharat and I are extremely fortunate to be blessed with her in our lives. Radhya is bubbly and always smiling. Sometimes she does mischievous things that instantly bring back memories of my own antics as a child.” (Also Read: Sushant Singh Rajput To Soon Propose 'GF', Rhea Chakraborty For Marriage? She Already Has An Answer) 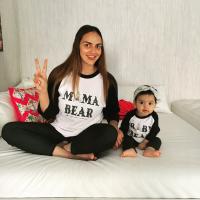 Further sharing how motherhood has made her confident and strong, Esha had remarked, “Mamma, Ahana and my in-laws comprise a strong support system for Radhya. My life feels more complete now, after having had her. Motherhood has made me more confident, content and relaxed as a person, it has worked like magic for me. A large chunk of my daily routine involves Radhya now. As soon as I finish this interview, it will be her bath time. We maintain a strict routine for her.” 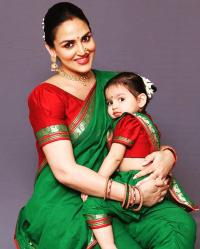 In the same interaction, she had signed off by telling how Radhya started a new chapter of her life. Esha had quipped, “Motherhood has also made me imbibe a lot more energy, and the yearning to live life to its fullest. I feel a huge chapter of my life has just started with the arrival of Radhya. Looking into her eyes, I understand why mamma's eyes light up every time she sees Ahana and me.” (Checkout: Saif Ali Khan Gets Angry With Paps Who Won't Stop Clicking Taimur Ali Khan, Says, 'Enough' [VIDEO]) 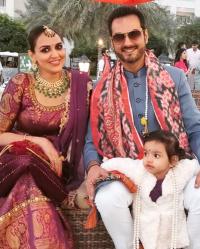 Here's hoping that we get to see more of Esha and Radhya’s Janmashtami celebration pictures!