The ‘good news’ knocks the door of the Takhtani family yet again as Esha Deol, who has recently embraced motherhood for the second time, announced about another soon-to-arrive junior Takhtani. 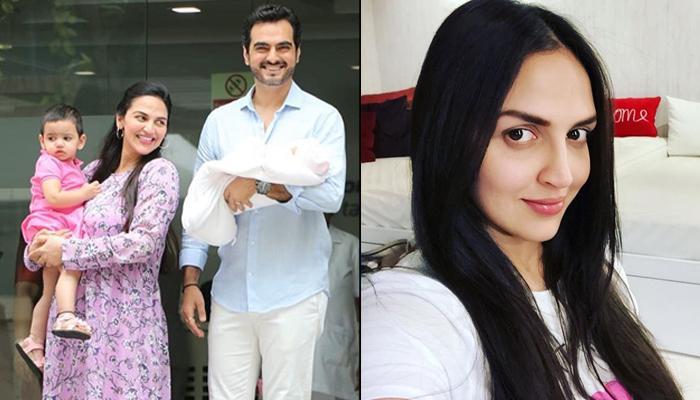 The Deol and Takhtani families have been beaming with joy and are on cloud nine with the arrival of Esha Deol and Bharat Takhtani’s second born. Esha and Bharat became proud parents for the second time to a little angel, Miraya Takhtani on June 10, 2019. The lovebirds had embraced parenthood for the first time on October 20, 2017, when Radhya Takhtani was delivered to them by the stork. Seems like the ‘happy times’ have knocked the door of the Takhtani clan, yet again! (Also Read: Arjun Rampal's Girlfriend, Gabriella Reveals If They Have Thought Of A Name For Their Baby Boy)

Before we reveal the details of the same in the forthcoming paragraphs, let us give a little flashback of Esha Deol and Bharat Takhtani’s love story. A guy falls in love with a girl while they were in school but irked her in the process of wooing her. Until they meet again as charming adults and the boy finally proposes his childhood crush. Sounds like every Bollywood story, right? Well, this is all about Esha and Bharat’s love chronicle. Esha and Bharat had tied the knot on June 29, 2012, and ever since, the former has never failed to give us some serious bahu and sasural goals.

Coming back to the ‘good news’ knocking the door of the Takhtani family, Esha Deol, who has recently embraced motherhood for the second time, announced about another soon-to-arrive junior Takhtani. No, she is not pregnant again. This time, it is her brother-in-law, Manik Takhtani and sister-in-law, Tanvi Gupta Takhtani who are soon going to welcome their little bundle of joy. Sharing a ‘baby on board’ picture from Manik and Tanvi’s pregnancy photoshoot, Esha wrote, “Congratulations Tanvi and Manik. Another junior Takhtani on board.”

Manik Takhtani and Tanvi Gupta had gotten married in 2014 and their ring ceremony was one lavish function from their pre-wedding ceremonies. For her brother-in-law, Manik’s ring ceremony, Esha Deol had opted for a black gown with heavy diamond neckpiece, earrings and bangles, while her husband, Bharat Takhtani had looked dapper in a blue suit. It was a fun-filled ceremony with a three-tier cake, lots of guests, fun, dance and laughter. Here are some pictures from the function:

Esha Deol leaves no chance in giving major sasural goals to all the women out there. Sometime back, Esha had shared a lovely picture with the ever-gorgeous Takhtani bahus seated gracefully and trust me, they had looked beautiful to another level! Sharing the snap, Esha had captioned the picture as, “Bahu squad #Takhtani #bahus! “The T girls” #sisterinlaws #sistergoals”, she had also tagged her sisters-in-law and backed the caption with a couple of heart-on-heart emojis.

For her brother-in-law, Devesh Takhtani’s wedding, Esha Deol had danced like there’s no tomorrow in his baaraat, and had fun posing with the family and her husband. In one of the pictures shared by Esha on her Instagram, she could be seen bonding with her sister-in-law Tanvi Gupta and had captioned it as, “All set for #devasthan wedding with my gorgeous sister in law @tanvi_gupta21!”. For the wedding, Esha had looked gorgeous in a pink-coloured lehenga adorned with heavy jewellery and gajra in her bun.

Radhya Takhtani and Miraya Takhtani have been keeping their mommy, Esha Deol busy these days. In an interview with the Mumbai Mirror, Esha had revealed how her newborn baby girl’s name is connected to her one-and-a-half-year-old daughter’s name. Esha had stated, “When Lord Krishna worships Radha, it’s called Radhya, while Miraya means a devotee of Lord Krishna. Both the girls have that in common and I love how Radhya and Miraya sound together.” (Also Read: Chhavi Mittal Reveals When One Should Not Smile Back At Their Baby, Talks About Baby Sleep-Training) 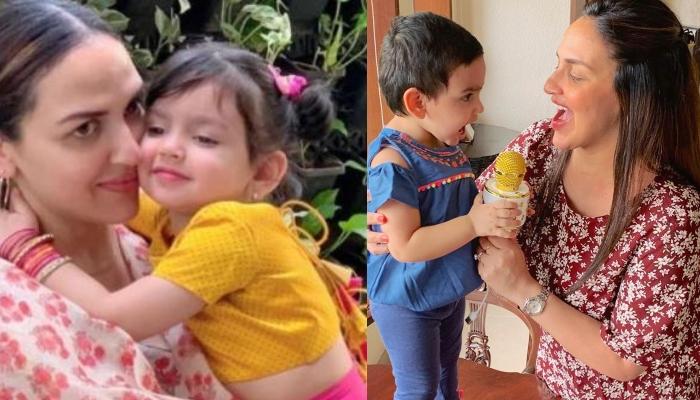 Christmas Eve is here! It’s that week of the year when the festive spirit is on high, a time to spread joy and a festival of love and laughter, carols and lights, kindness and merriness! Just like the world is celebrating Christmas Eve with much zeal and enthusiasm, B-town is