Bollywood actresses are known for their sartorial picks. Here are some B-town divas who stunned in parrot green lehenga like a queen. Check Out!

Celebrity-style outfits are perfect to run after when you are confused about what to wear for the next nuptials in the calendar. And, if you're also bored of your wardrobe, then bring some celeb-approved colors to your life.

What could be a brighter and more traditional outfit for you other than a lehenga? Green is often described as a mood refreshing colour. Just like us, even celebrities have to decide what to wear to get that perfect look on special occasions. To make our life easier, we can take fashion inspiration from our favourite divas. Scroll down to check out how B-town beauties slayed in their green lehengas like a queen. 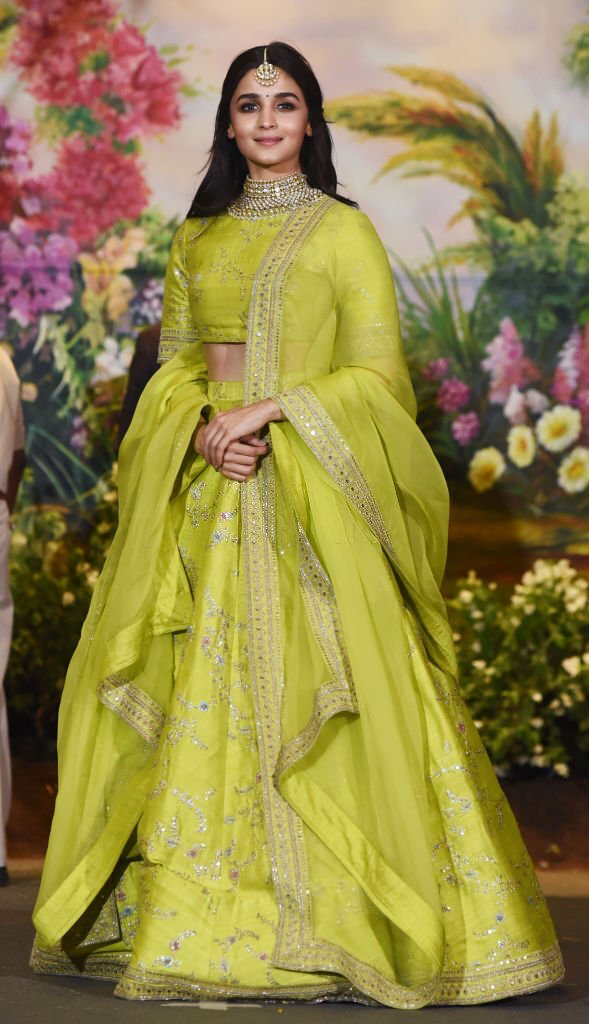 Want to know what made us believe that wearing bright colors can lift one’s mood in depressing times? It was Alia Bhatt’s traditional look for Sonam Kapoor and Anand Ahuja’s wedding reception party that revived our mood instantly. The Gangubai Kathiawadi actress had looked no less than a royal princess in Sabyasachi Mukherjee's parrot green-coloured lehenga-choli. It was comprised of a high neck blouse, combined with a matching skirt with gold embroidery. 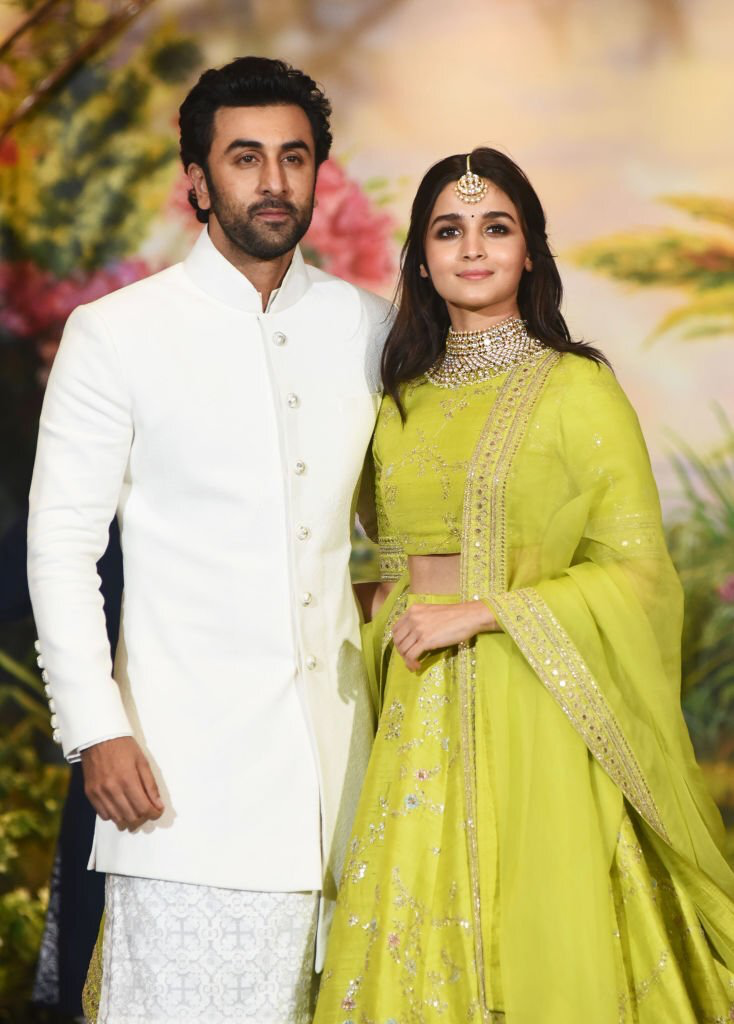 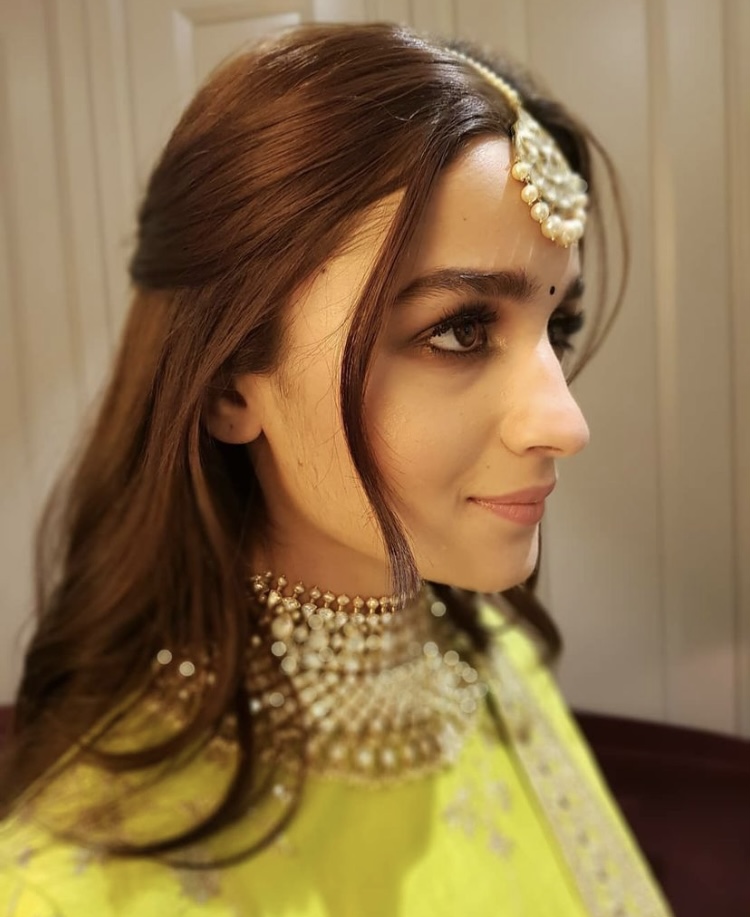 Alia's outfit had featured a matching sheer dupatta with a golden gota patti border. She had accentuated her look with a statement pearl beaded choker and maang teeka. The jewellery was also from designer, Sabyasachi’s heritage collection. People might say that you should wear minimalistic accessories when donning a vibrant color, but the Highway actress had proved them wrong. She had completed her look with blush pink lips, smokey eyes, a bindi, and messy hair. This gorgeous green lehenga was from the shelves of ace designer, Sabyasachi's Spring Summer collection (2018). 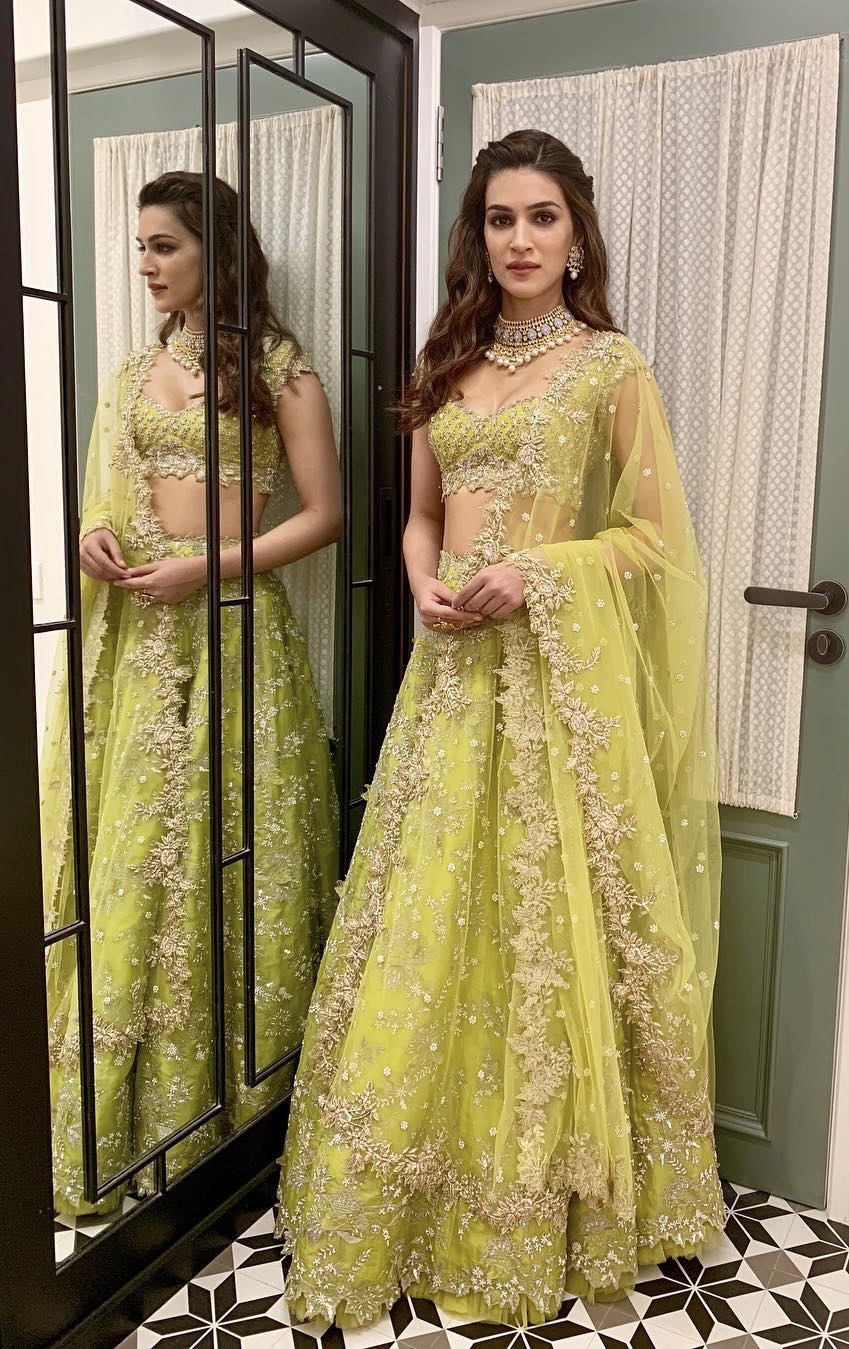 It was Shah Rukh Khan and Gauri Khan's Diwali party in 2018, when Kriti Sanon had attended the event in a stunning lehenga. On the celebrity-packed night, it was Kriti's lehenga by designer, Anushree Reddy, that had brought fashion hawkers of the industry to a halt. Her lavishly designed lehenga can be a perfect attire for a wedding. 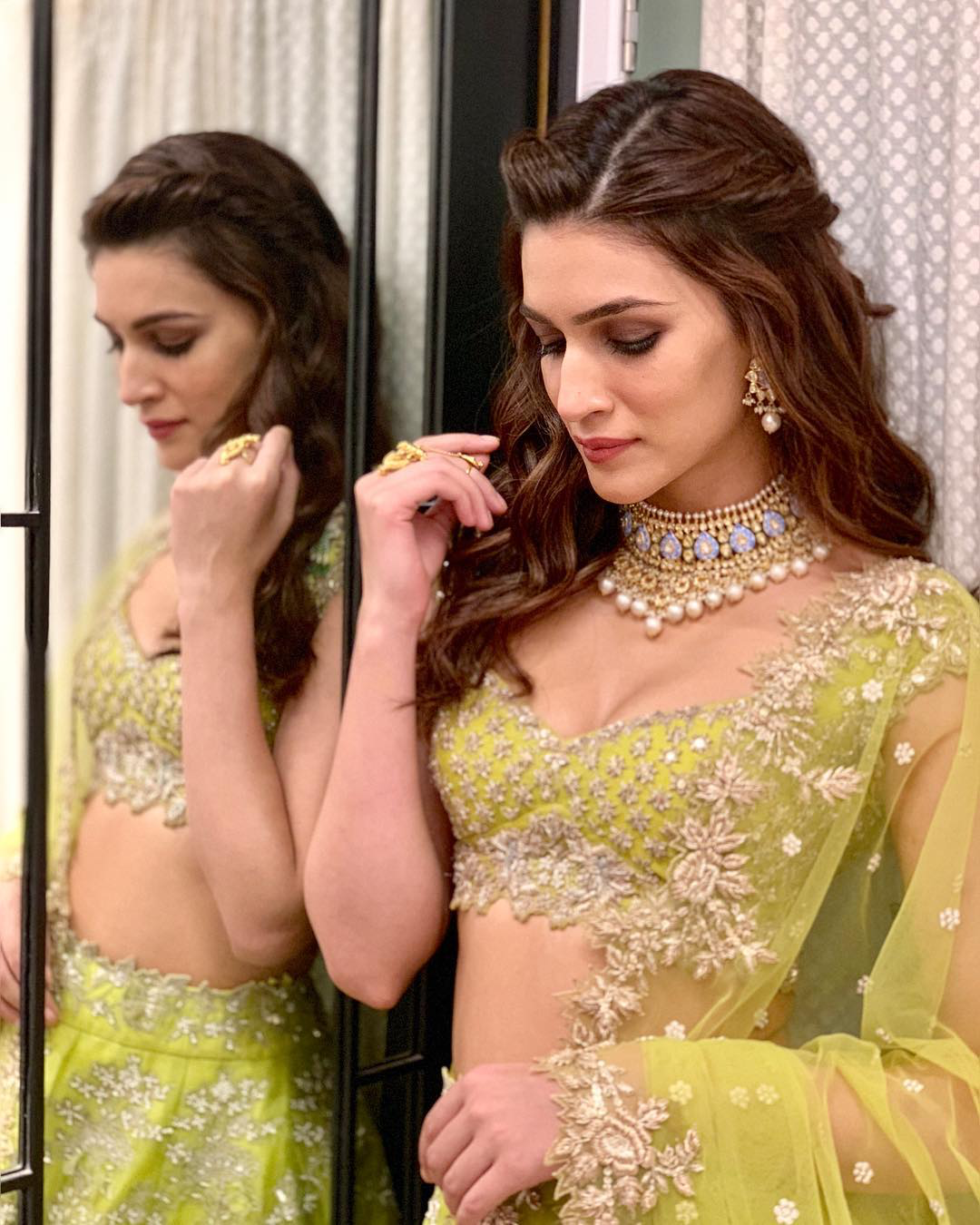 The plunging neckline blouse with silver motif embroidery had looked gorgeous on the Mimi actress. She had carried a high waist green skirt with a 3D floral stitched border work on the sheer dupatta. Kriti had completed her look with a polki choker set, a pair of pearl drop earrings and a statement ring. The beautiful, Urvashi Rautela, who had represented India at the Miss Universe 2015 pageant, never fails to share her luxurious lifestyle with her fans. The epitome of beauty, Urvashi had looked stunning in a green lehenga at Azhar Morani’s wedding reception. She had paired it with an embellished backless choli. 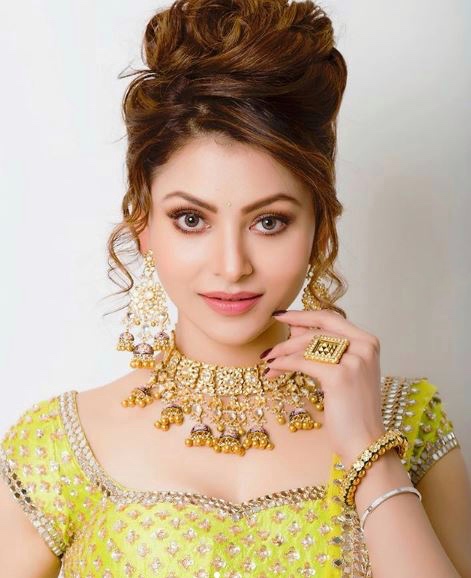 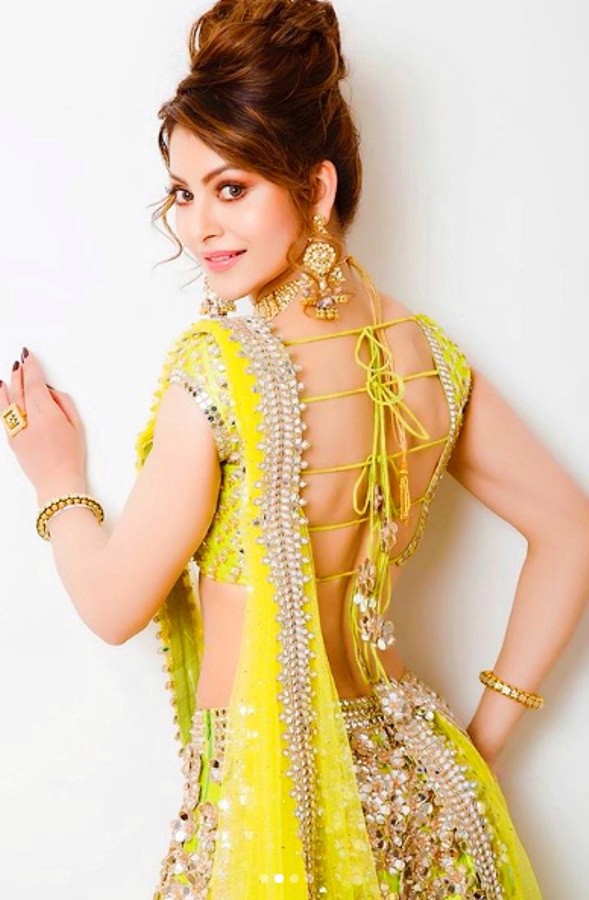 Urvashi had accessorised her look with a golden choker necklace and a pair of golden chaandbalis. A ring and bangles had added charm to the Hate Story 4 actress’s oh-so-glamorous look. Her top knot bun and sequined dupatta had amped up her entire appearance. Actress, Prachi Desai had made her acting debut in the television industry back in 2006 as the protagonist of the show, Kasamh Se, opposite Ram Kapoor. On the fashion front, the stunner Prachi always shares an easy-to-achieve style that sets her apart from the rest. 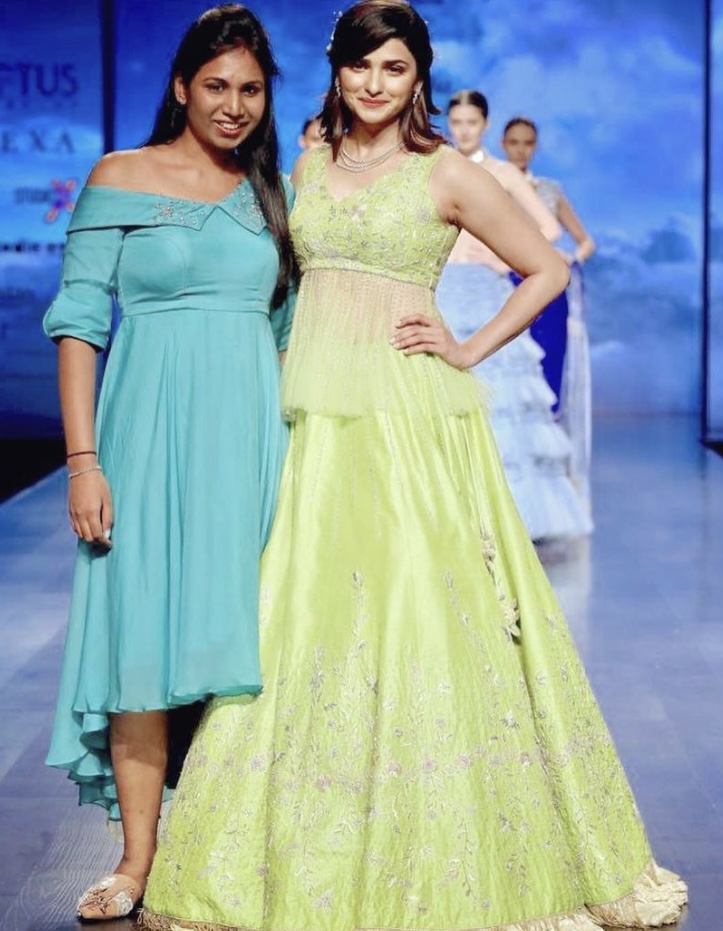 The gorgeous actress had emerged as the show stopper at Lakme Makeup India Fashion Week in 2019 and had looked beautiful in a minimalistic green lehenga. She had walked the fashion show for designer, Archita Narayan in a simple yet conventional parrot green lehenga, which had silver sequin detailing all over it. She had looked stunning in a pair of statement earrings, a three-tiered neckpiece combined with glossy lips and half-tied hair. The golden hemline on the skirt had added extra charm to her attire. 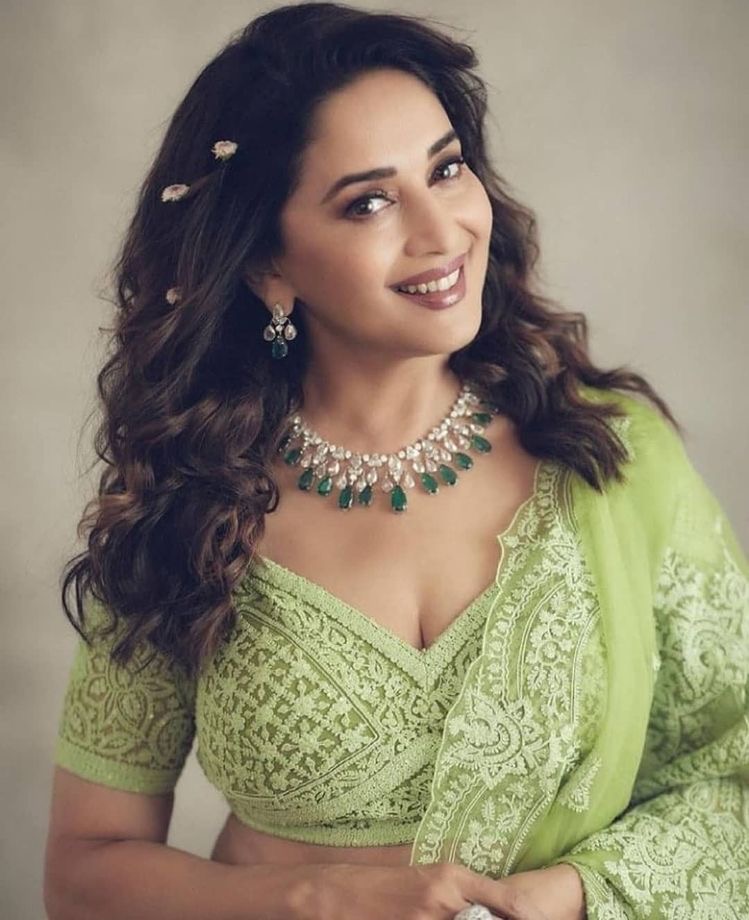 The Dhak-Dhak girl of Tinseltown looks astonishing in almost every outfit she wears, but her looks accentuate when she goes traditional. In an episode of Dance Deewane 3, Madhuri Dixit was seen in a beautiful green lehenga-choli that had added to her sartorial elegance. She had picked the outfit from the brand, Torani. 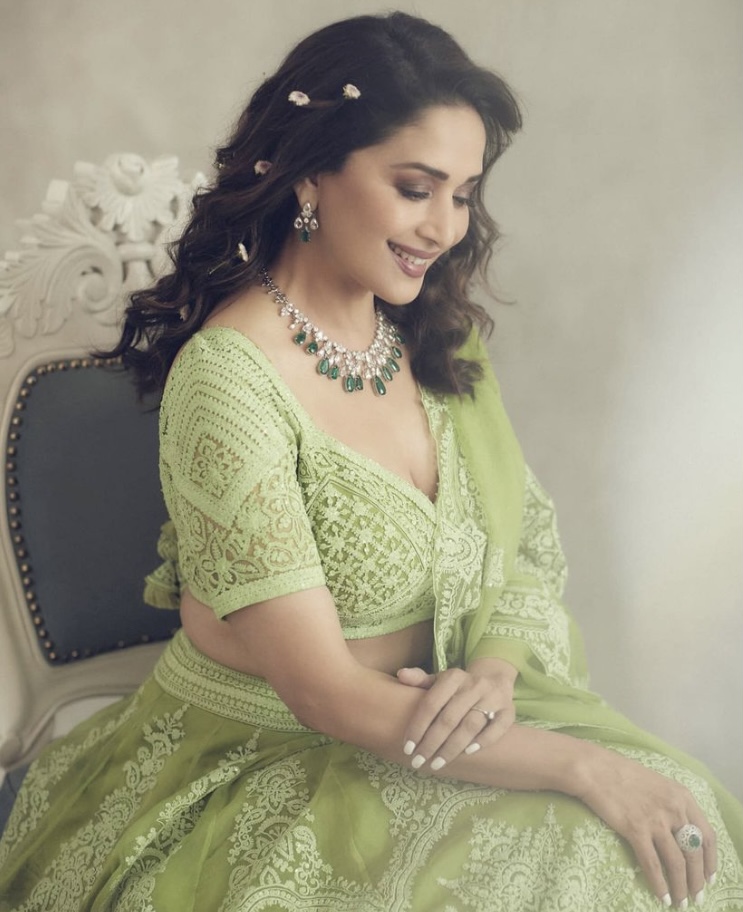 The Devdas actress had dolled up in a low-neck blouse that had comprised of white hand embroidery and a voluminous ready-to-twirl skirt filled with similar patterns. She had carried a matching green dupatta on one shoulder and had worn a diamond necklace with drop earrings. She had added pink lip shade, smokey eyes and a highlighter to achieve that glam look. 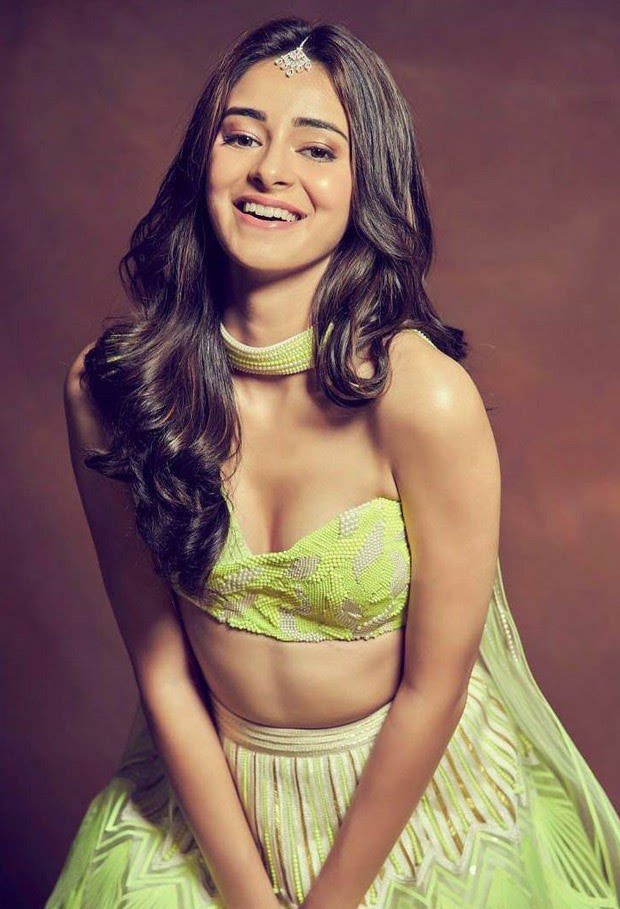 The Gehraiyaan actress loves chic style and pop colors in her wardrobe. Time and again, we have seen Ananya posing in vibrant coloured clothes. Adhering to the sartorial fashion choices, she had picked Amit Aggarwal’s parrot green ensemble from the LUMEN 2019 collection on Diwali 2019. 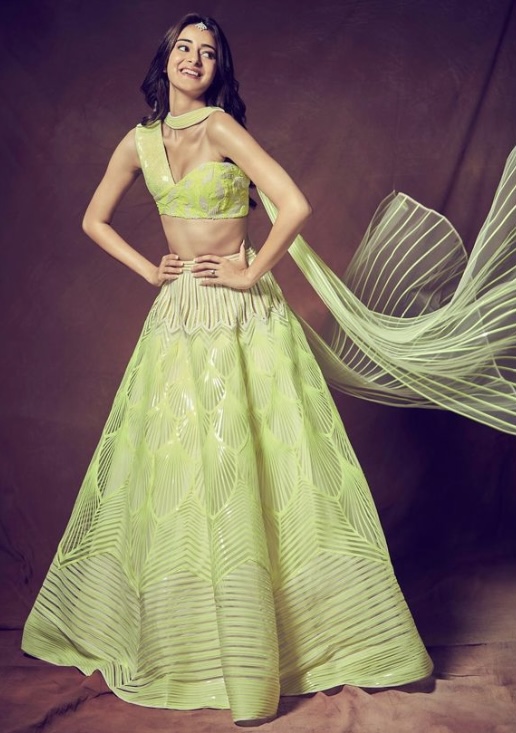 The 23-year-old actress had worn an off-shoulder choli with an uplifted skirt that had identical patterns on it. The attire had several layers of neutral tones as it was prepared using recycled materials. Ananya had worn a maang teeka to accessorize her look and had carried a striped duppata on one side.

Don't Miss: Shweta Tiwari Raises The Temperature With Her Traditional Look In Lehenga 'Choli' Worth Rs. 1,60,000 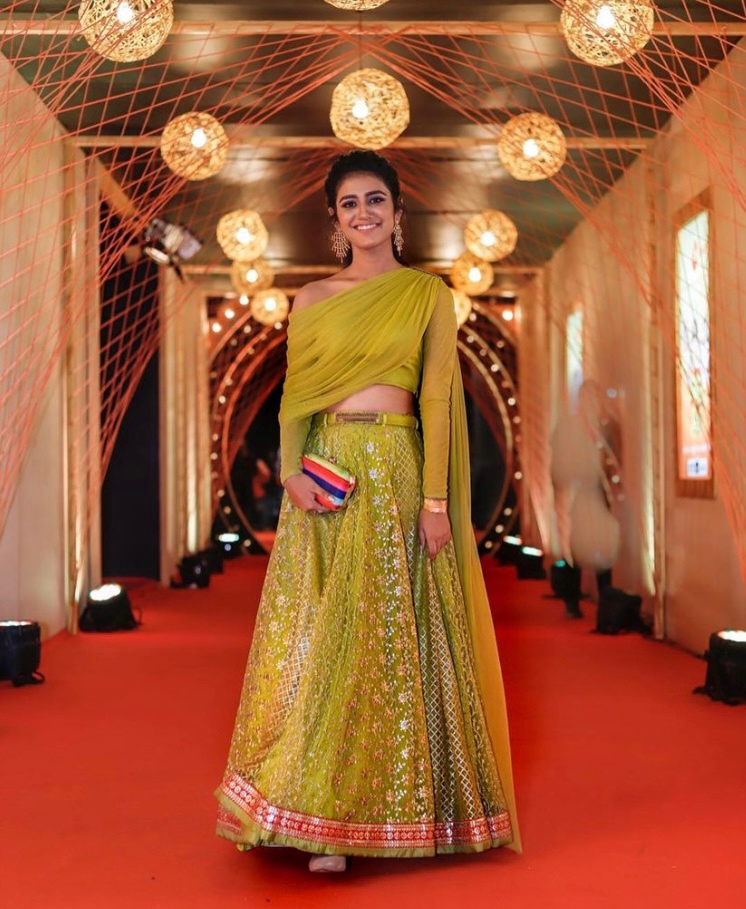 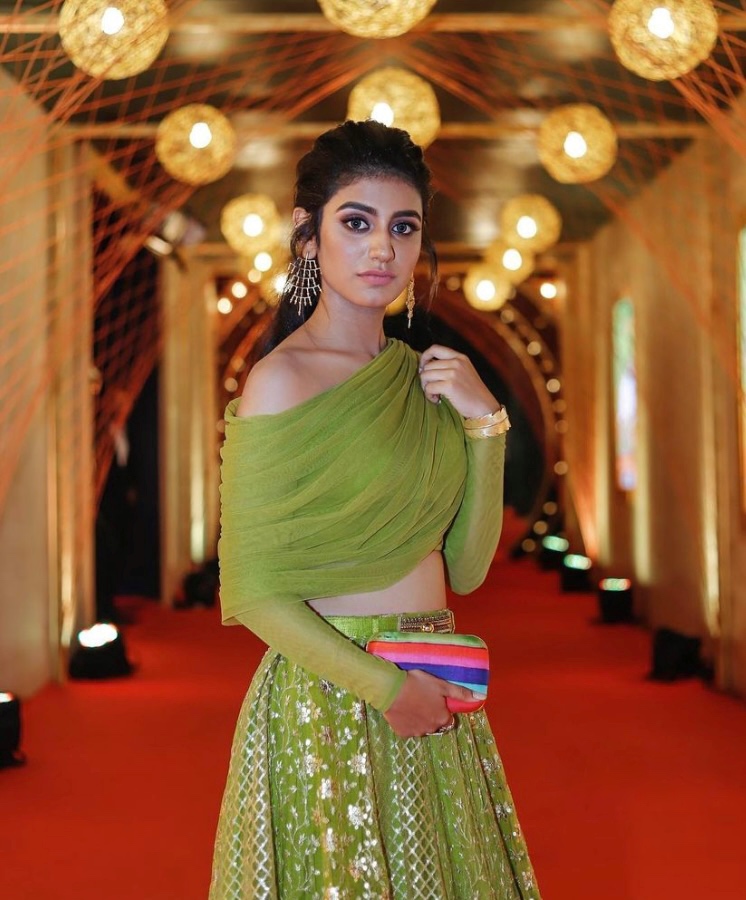 Yes, we are talking about the same famous Malayali actress, Priya Prakash Varrier, who is also referred to as the ‘wink girl’. She had become an overnight sensation as her video song ‘Oru Adaar Love’ had released back in 2019. Priya had shared some jaw-dropping pictures on her social media handle wearing a green lehenga. She had carried a full-sleeved blouse and paired it with a dupatta. Her lehenga had comprised of a long skirt with marvelous sequin floral embroidery, which also had a golden belt on the waist. She had added that extra drama by carrying a multi-colored clutch. The Ishq Not A Love Story actress had worn a pair of statement earrings to complement her attire. The hottest munni of the Hindi film industry, Malaika Arora, had stunned the audience as she had turned muse for designer, Anushree Reddy, at the Lakme Fashion Week 2019. She had walked down the runway in a parrot green voluminous lehenga. She had paired her embroidered lehenga with a plunged-neckline backless blouse. She had completed her look with diamond emerald jewellery and drop earrings. The beautiful actress had kept her wavy hair open on one side of her shoulder.

If you wish to add a parrot green-coloured lehenga to your wardrobe, then you must take inspiration from these Bollywood beauties and ensure that all eyes stay on you. Which look do you wish to recreate? Let us know!