'Diya Aur Baati Hum' fame, Prachi Tehlan ties the knot with a businessman, Rohit Saroha and the pictures and clips coming across our way are merely beautiful. Find out!

The wedding season has begun despite the ongoing and relentless COVID-19 pandemic. While the South superstar, Rana Daggubati had garnered the limelight for his marriage with Miheeka Bajaj, popular show, Diya Aur Baati Hum fame, Prachi Tehlan had also announced that she is going to get married to her businessman and wildlife conservationist beau, Rohit Saroha on August 7, 2020. For the uninitiated, Prachi Tehlan is a former Indian netball and basketball player, who had represented India in the 2010 Commonwealth Games as the captain of Indian Netball Team. Under Prachi's captaincy, the Indian team had won its first medal in 2011 South Asian Beach Games. (Recommended Read: Sushant Singh Rajput's Niece Shares A Glimpse Of his Pet, Fudge, Hopefully Waiting For His Master)

But because of the lack of opportunities for female players of netball and basketball in India, she had put her sporting career on hold and had made her television debut in 2016 with the hit-show, Diya Aur Baati Hum and had also featured in a Punjabi film, Arjan. Well, in the last few days, we have seen her sharing tons of pictures and videos, giving an insight into her pre-wedding celebrations. Finally, the biggest day of her life has arrived and if you're equally excited, then scroll down to see it all!

Ali Fazal Finally Reveals The Date Of His Wedding With Girlfriend, Richa Chadha, Details Inside

'Udaan' Fame, Sheetal Pandya All Set To Marry Her School Friend, Abhishek Bhattacharya On This Date 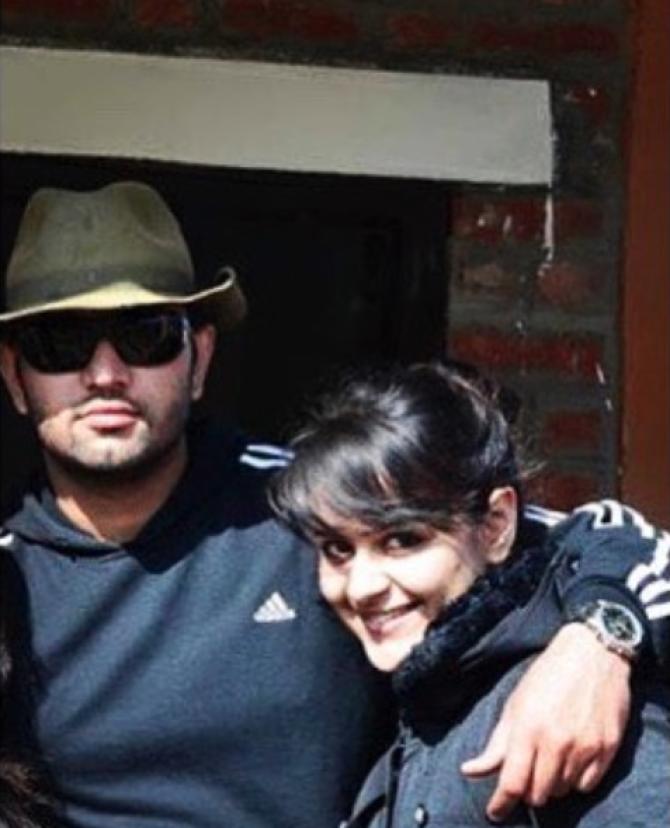 We've got our hands on the first-ever picture of Prachi Tehlan's lockdown wedding, and you're in for a treat. Prachi shared a dreamy picture of her phera ceremony with her husband, and we can't get over the sheer beauty of it. The picture sees Prachi's husband, Rohit Saroha in the foreground blurred, while a glimpse of Prachi can be seen from over his shoulders and we can spot her red and golden wedding ensemble. The angle at which the picture is taken imparts a surrealness to it. Prachi captioned the picture as "7.8.2020 Wedding Date .@rsaroha #weddingbells #ithappened #prachitehlanwedsrohitsaroha #Prahit #beautifulbond." Check out the picture below: 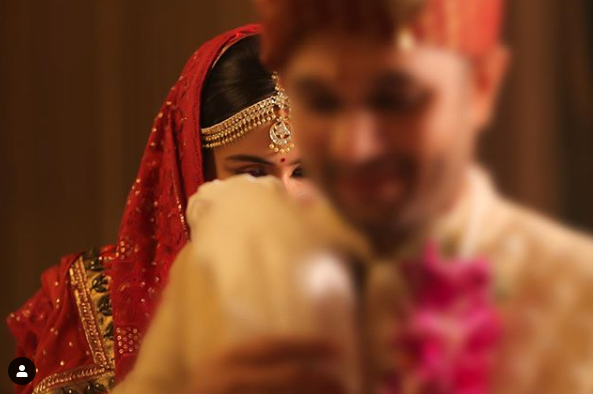 On August 7, 2020, Prachi had shared a picture of her haldi outfit for her fans Instagram handle. In the photo, we could see the beautiful yellow outfit that is designed by fashion designer, Vidhi Verma. Along with the picture, the actress had written a caption in which she had revealed the time this outfit had taken to create, and it could be read as "A big shoutout to @vidhiverma_acoutureatelier for this amazing Haldi outfit. In complete love with this stunning piece of creation. It took long discussions, and 15 days to customise this lovely outfit. It truly captures the beauty of ruffles. Comfortable to wear, yet stylish to flaunt, this outfit is beyond eye-pleasing." Also, she had shared some glimpses from her haldi ceremony in her Instagram stories. Take a look! 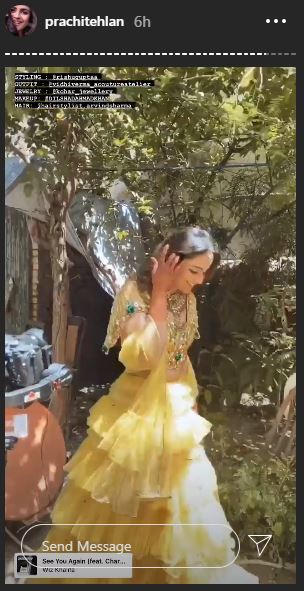 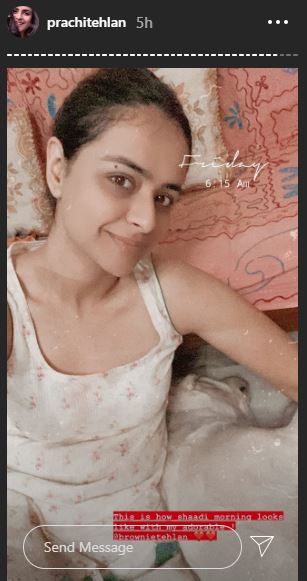 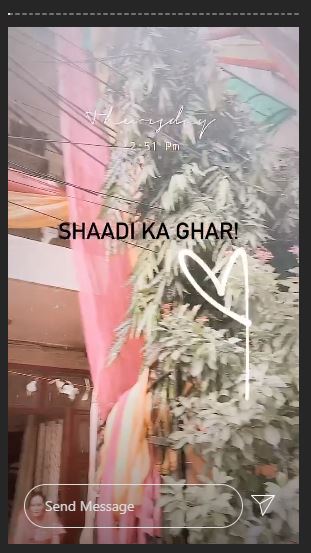 On August 6, 2020, Prachi had taken to her Instagram handle and posted multiple pictures with her fiancé, Rohit Saroha revealing their mehendi ceremony attire and it was a treat to eyes! Prachi had captioned the pictures with Rohit as "Finally we get to click some beautiful pictures together!" For the mehendi ceremony, Prachi had opted for a stunning choker pleated stole, and a pin-tuck detailed torso which she had paired with heavy gathered sharara along with a hand-embroidered belt on the waist. Rohit had complemented her in a white kurta and red saafa. (Don't Miss: Rana Daggubati And Miheeka Bajaj Tapped On The Beats Of Dhol On Their Haldi Ceremony [Video Inside]) 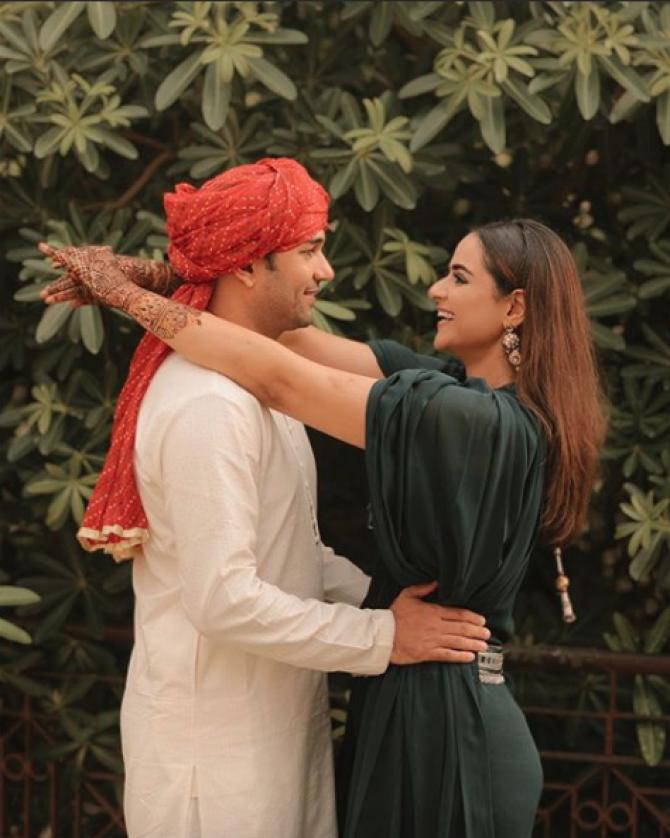 The mehendi ceremony of Prachi Tehlan was a fun function with her family by her side, but it was her dance on the song, London Thumakda with her nani that had stolen the limelight. Sharing the video on Instagram, Prachi had written, "Nani is a perfect dancer" followed by heart and love emoticons. Sharing another dance videos on the song, Kaala Chashma with her dad, Prachi had written, "Mehendi dance with family! Woah!!! So much of fun".

Not a lot of people know this, but Prachi and Rohit's love story is not less than a Bollywood movie as it was in the year 2012 when Prachi Tehlan had met Rohit Saroha at her cousin's wedding, and the latter had experienced a different vibe with her. But unfortunately, three months into their relationship, Prachi and Rohit had parted ways mutually. But just like any Bollywood movie out there, destiny had different plans for Rohit and Prachi, and it was in May 2020, when they had reconnected. 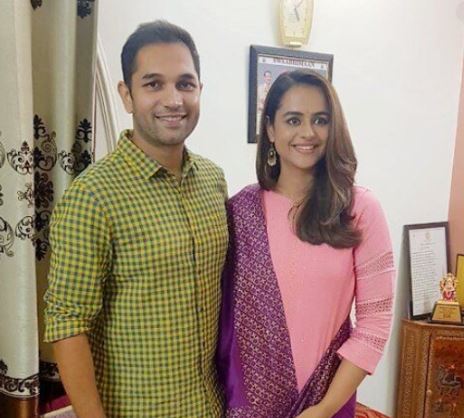 The actress had talked about this in an interview with BollywoodLife and had said, "Both of us were focussed on our individual careers, and there were inhibitions in us about taking it (the relationship) forward. We hardly met thrice in those three months of dating, before deciding to part ways and move on in life. Today, when I look back, it's hard to believe that we didn't exchange a single message for eight years almost, until May this year, when we got to connect again." (Also Read: Hardik Pandya's Elder Brother Krunal Is Busy Doing 'Tauji' Duties 'Talks Cricket' With Junior Hardik) 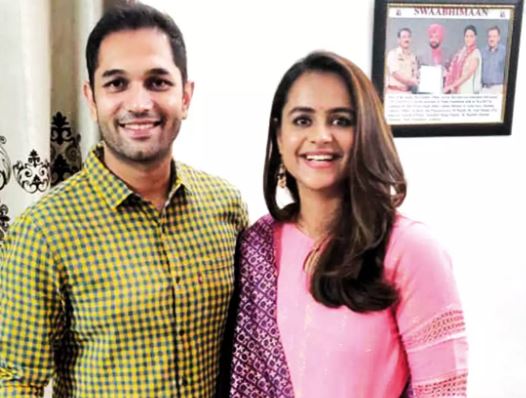 Congratulations to Prachi and Rohit for starting a new phase together!