Divyanka Tripathi and Vivek Dahiya are one of the most sought-after couples of the glamour world. On November 26, 2020, Divyanka shared adorable pictures with Vivek and we were in complete awe.

There are some celebrity couples in the glamour world, who have reinstated our faith in love and marriage and television’s sweethearts, Divyanka Tripathi and Vivek Dahiya are one of them. The duo had met on the sets of the serial, Yeh Hai Mohabbatein. From co-stars to friends to now partners, Divyanka and Vivek are an epitome of fairytale romance. It was on July 8, 2016, when Divyanka had added the surname ‘Dahiya’ to her name post her wedding with Vivek and since then, they have been swooning us over their ‘match made in heaven’ chemistry. (Also Read: Sana Khan Reveals How She Is Pampered In Her 'Sasural', Shares The Delicacy Cooked By 'Sasu Maa')

Married for four years, the couple has been giving marriage goals to millennials with their mushy pictures and heart-melting notes for each other. On November 24, 2020, Divyanka had taken to her IG handle and shared adorable pictures with Vivek from their romantic date. Along with the pictures, Divyanka had expressed her emotions while being with Vivek and had written, “Like a calm sea...when next to you.”

Divyanka Tripathi and Vivek Dahiya recently visited Rajasthan and has been sharing mesmerising pictures from the same. A few hours back, Divyanka took to her IG handle and shared beautiful pictures from their romantic getaway. Dressed in a sky blue attire, Divyanka looked gorgeous whereas, Vivek looked handsome in a black shirt and beige-coloured pants. Along with the pictures, Divyanka wrote, “TERE ISHQ MEIN wali photos.”

On November 8, 2020, Vivek Dahiya had turned a year older and his beautiful wife, Divyanka had penned an adorable birthday wish for him. Sharing adorable pictures with Vivek, Divyanka had written, “It's odd writing a #BirthdayCaption for you when you are sitting right next to me and I've wished you 10 times since last night! Happy Birthday Viv! On this platform best I can summerise my feelings by saying - "Thanks for taking birth on this day. I would have been a lost, aimlessly wandering soul without you. I love you @vivekdahiya.” (Also Read: Ankita Bhargava On Breastfeeding Daughter, Mehr And How She Connected With Her On Their First Night)

After four years of marital bliss, Divyanka Tripathi Dahiya had revealed the secret eighth wedding vow and every millennial couple could easily relate to it. On October 3, 2020, Divyanaka had taken to her IG handle and had shared a glimpse of their date night, as she had posed with a wine glass on the table and Vivek clicking her picture. Along with the picture, Divyanka had written, “Wedding vow no 8-Will be your hands-on model and photographer forever! #SaturdayNight.” Divyanka had vowed that she will forever be Vivek’s muse and photographer! Isn’t it sweet?

In a throwback interview with the DNA, Divyanka Tripathi Dahiya had revealed how she had fallen for him. Talking about the same, she had stated, “I had done a small scene with him and we were barely speaking to each other. Since I had no intention of having a relationship with him, I did not give him much of a thought.” Vivek, on Divyanka’s first impression on him, had retorted, “We were in the in the same show but we never interacted with each other. I had not done any scenes with her for a long time, but I could guage by her body language and from people around her that she was respected as a performer and a person. Always draped in a sari, I thought she was the Tulsi of today.” (Also Read: When Sharmila Tagore Talked About Son, Saif Ali Khan's Second Mother And Her Help In His Upbringing) 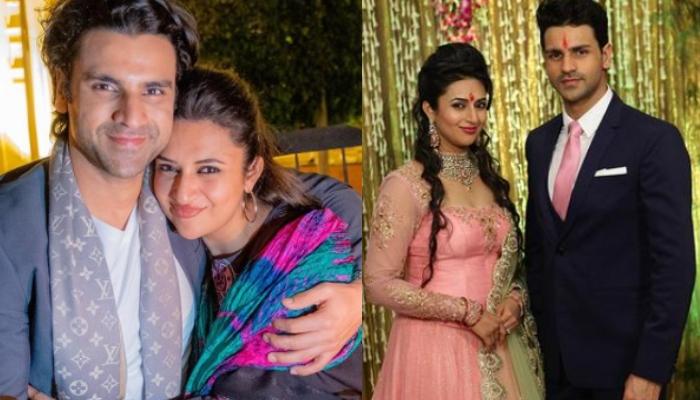 When there is love, then everything seems right. Lucky are those, who marry the one they love and start a happy life with them. A plethora of emotions flow through our hearts when we take the plunge with the one, who we know will always be standing like a pillar of