Divyanka Tripathi and Vivek Dahiya are one of the most loved couples of the glamour world. We stumbled upon a video of the couple dancing their heart out. Check out!

Finding a soulmate in your best friend and spending the rest of your life with them is a blessing in disguise. And lucky are those, who find a partner, who not only loves them but also understand every unsaid emotion of theirs. Actress, Divyanka Tripathi is one such actress, who had found her Mr Perfect, Vivek Dahiya on the sets of Yeh Hai Mohabbatein and had gradually fallen in love with him. Divyanka and Vivek are one of the most sought-after couples of the glamour world and leave no chance to express their love on social media. (Also Read: South Megastar, Chiranjeevi's Brother, Naga Babu Reveals He's COVID-19 Positive With A Strong Note)

It was in 2015 when rumours about Divyanka dating Vivek had started making the rounds but the duo had quashed all the rumours. On July 8, 2016, Divyanka had added the surname ‘Dahiya’ to her name post her wedding with Vivek. For her wedding, Divyanka had opted for a red lehenga which she had accessorised with a choker, maang teeka, red bangles and kalire. Vivek had complemented her well in a beige coloured sherwani and a matching safa.

While scrolling through our social media handle, we stumbled upon a heartmelting video of Divyanka and Vivek shared by one of their fan pages. In the video, the lovely couple was seen dancing as if no one’s watching. Divyanka looked stunning as she donned a baby pink coloured one-piece dress and Vivek looked dapper in a black coloured T-shirt and jeans. With arms around each other, the duo danced their heart out on the song, Tennu Suit Suit Karda. Take a look:

Did you know how Vivek Dahiya had proposed his ladylove, Divyanka Tripathi for marriage? On Divyanka’s birthday eve, Vivek had decorated her home with lights and flower petals. With a t-shirt in his hand on which, ‘You are an answer to every questions’ was written on one part and ‘Divyanka marry me’ on the other, Vivek had made the proposal a cherishable memory for Divyanka. Vivek had also told Divyanka that she has everything one can gift except commitment and he is ready to present her with that, making the moment an unforgettable one for her! (Also Read: Suhana Khan Shares A Stunning Throwback Picture With Friends, Bestie Shanaya's Comment Is Unmissable)

Divyanka Tripathi and Vivek Dahiya have always made their fans go crazy with their cute social media banters as they love pulling each other’s leg. On February 5, 2020, Divyanka had taken to her Instagram handle and had shared a beautiful picture with her hubby, Vivek. The duo had looked adorable while holding hands and twinning with each other. Along with the picture, Divyanka had written, “Aata kya Khandala?” Vivek did not reply on her post, instead, he had taken to his Instagram handle and had shared another picture with her and had captioned it as “Offer de ke khud hi sharma gayi.”

In a SpotboyE interview, Divyanka Tripathi Dahiya had opened up about baby planning and was quoted as saying, “Not soon, at least. When I will give the green signal, he’ll support it. Right now, he can see that I’m not ready for it.” When asked if she and her husband have their own fair share of fights, Divyanka had retorted, “Yes. But we are very communicative in our relationship. We speak to each other about it rather soon, if he's hurt or finds something wrong and vice-versa. At the end of the day, we must resolve it. When communication stops, mind takes over and plays games. It is not tough to resolve issues if you talk to each other.” And who takes a step back in the fight, Divyanka had replied, “Vivek is very supportive, he is more patient than me. I am always stressed out; I tend to react. But, I am changing- woh thehrav mujh mein aa raha hai.” (Also Read: Hina Khan Gets A Pre-Birthday Surprise From Boyfriend Rocky Jaiswal, Says, He Is Simply 'Love')

What do you think about Divyanka and Vivek’s chemistry? Let us know. 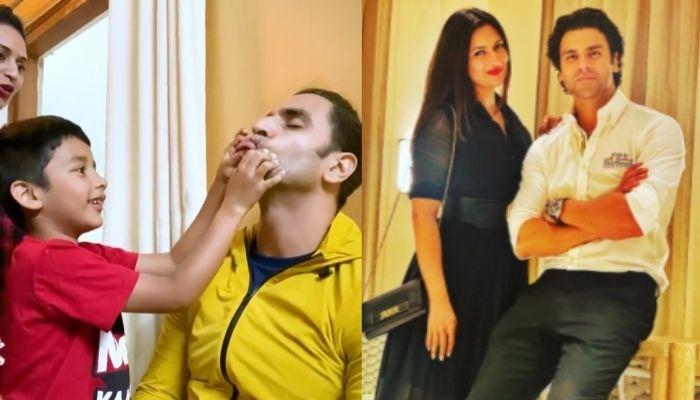