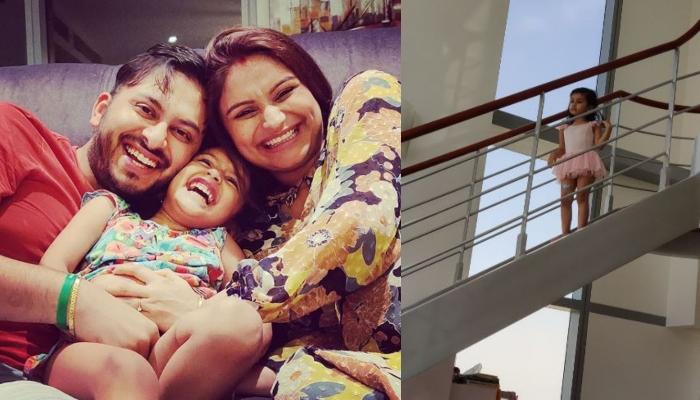 There aren’t a lot of people out there, who share the same kind of love story as Bigg Boss fame star, Dimpy Ganguly's love life. The television actress and her hubby, Rohit Roy might have bumped into each other in Dubai, 2013, but they were not just any acquaintances, who belonged to the same town, they were childhood friends. During their school days, they even had a crush on each other. Although they were together and best of friends, fate didn’t give them a chance to confess their feelings for each other. However, with time and a little bit of magic from God almighty, they came close to each other in a difficult time that makes their bond strong and special. (Recommended Read: Shriram Nene's Birthday Wish For His 'Talented Better Half', Madhuri Dixit Will Melt Your Heart)

After their long dating period, Dimpy Ganguly and Rohit Roy had tied the knot on November 27, 2015, in Kolkata. Since then, they have welcomed two beautiful children, Reanna and Aaryan in their lives and are living one of the best phases of their life. Recently, the doting mother, Dimpy Ganguly shared a video of her daughter adorably debating with her father, Rohit Roy and it’s simply hilarious to watch.

On May 16, 2020, Dimpy Sharma took to her Instagram handle and posted an adorable video of her daughter standing in the middle of a staircase and debating with her daddy, Rohit Roy. The four-minute-long video is no less than therapy for everyone in this boring lockdown. However, the topic of the debate is what makes it even funnier, as the father-daughter duo is debating over ‘how to become a sleeping beauty’. The answers from the baby girl are a treat to watch but the doting mother has admitted that she wasn’t expecting these debates to happen this early. Her caption can be read as “The debates have started... wasn't expecting it at 3!” Take a look at the video below! (Don’t Miss: Anushka Sharma Holds The Bat As Virat Kohli Balls In Their Cricket Practice Session At Home, Watch)

When Reanna had turned 1, Dimpy Ganguly had shared an emotional note, defining her entire journey on her Instagram handle. Dimpy had written, "She came to me wide-eyed and smiling after 3 days of labour at 1 in the morning. And it was really strange for me cos I am used to seeing babies crying right after they are born (courtesy Hindi cinemas) but not Reanna! Her eyes were the most distinct feature of her face. They were steel grey and full of wonder checking out this whole new place she has just entered with only one familiar thing - my smell. And although my first reactions were like "can I touch her?" And when I did I was almost expecting her to be a plastic doll so imagine my surprise when the skin felt warm with her blood pumping through all her parts!! I kept holding her skin to skin experiencing so many emotions all at once but the only words that came out were "oh my god"!”

Dimpy Ganguly had continued, “The only time she cried was when the midwife was taking her away from me to clean her and weigh her - her first sign of affection for me, and in those few minutes, my heart felt like it's being ripped apart! Ever since she is mostly like that - wide-eyed and ever-smiling (unless u count the teething phase of course). Be it vaccines or ear-piercing or falling bruising her cheeks, getting a bump, my brave little girl knows how to get right up and bring that smile on (with a little help from nursery rhymes too..lol) and for that, I'm so proud of her!” (Also Read: 'Choti Sarrdaarni' Actress, Mansi Sharma's Hubby, Yuvraaj Hans Reveals The Name Of Their First Child)

Do you like the adorable video? Let us know!