'Thappad' actress, Dia Mirza posted an alluring picture from her childhood and everyone has fallen in love with the cuteness of this actress all over again. Take a look! 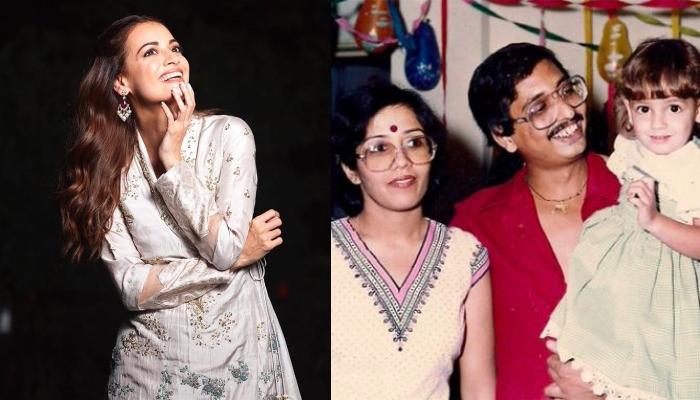 She was, is, and will always be one of the most beautiful, loved, admired, and respectful actresses in the history of Bollywood. The actress had made her debut back in 2001 with the film, Rehnaa Hai Tere Dil Mein and since then, the youngsters of every generation are falling in love with her. Even to this very day, the actress still holds that unexplainable and entirely mythical charm in her personality. In recent years, we have seen her giving some impactful performances despite a small role in movies like Sanju, Thaapad, and Zee 5’s web series, Kaafir. (Recommended Read: Niki Walia Of 'Astitva' Fame Posts A Throwback Wedding Picture Flaunting An Offbeat-Coloured Lehenga)

The faithful fans of the actress are happy that she’s back in acting and reports are floating all over the internet that a sequel of her debut blockbuster, Rehna Hai Tere Dil Mein is in works. Moving on, the actress has recently posted a picture from her childhood days, and just one look at the picture will bring a smile on your face.

On July 2, 2020, Thappad actress, Dia Mirza took to her Instagram handle and opened the box of her childhood memories for Instagram after a long period. But we have to say that it was worth waiting because the picture she has uploaded is simply one of the best childhood pictures of the gorgeous actress to this date. Talking about the picture, then we can see two young girls sitting on each side of the actress. The little Dia Mirza can be spotted sitting in the middle of the two girls as she poses straight for the camera with her adorable smile. Along with the picture, Dia wrote, “Sisterhood #ThrowbackThursday #Memories #ChildhoodDays.” The moment this picture went live, a lot of celebrities and fans couldn’t help themselves from complimenting the actress.

For the uninitiated, Dia Mirza had married her long-time beau and filmmaker, Sahil Sangha on October 18, 2014. Dia had ended her marriage of close to five years and a relationship of 11 years with her estranged husband, Sahil Sangha on August 1, 2019. Co-owners of the production company, Born Free Entertainment, the duo had announced to part ways mutually and had released a joint statement on the same. (Don’t Miss: Additii Gupta Tests COVID-19 Positive, Shared Her Story Of Confining Herself Away From Husband)

In an interview with Pinkvilla, the beautiful actress had opened up on her divorce and how people had reacted to her separation. Talking about people’s attitude towards her, post-separation, she had revealed, “You are moving in circles where people are educated, but they still feel a sense of sadness. There’s a sense of empathy as well. So the gaze is not necessarily critical, it’s empathetic and sometimes even pitiful. It’s also sometimes awe and admiration. Sometimes, people ask me how am I so strong, and how do I get up and go to work like this? I want to tell them I find my way and I hope you’ll find yours.”

She had also talked about how her close ones had reacted differently, and she only hoped that people would understand and respect her decision. She had added, “People who love you as a couple respond to it differently. People outside have a different reaction, your intimate friends who know you individually will respond to it a certain way. Your parents will respond to it differently. What you can hope and pray is that eventually everyone will understand and respect the space and decision that two people have chosen for themselves with dignity, respect and love for each other.” (Also Read: Krrip Kapur Suri Reveals How Much He Misses His Princess, Ray, Hopes He Doesn't Cry On Video Calls)

Do you like Dia Mirza’s childhood picture? Let us know!