Actress, Dia Mirza took to her Instagram story to share a no-makeup selfie. However, the mommy-to-be radiated an immense glow. Check picture!

A woman's life becomes very different when she is pregnant. Whether it is garnering a lot of love and affection from the other family members or radiating a hell lot of glow that comes with pregnancy, a woman, who is expecting her child, goes through all of it. Oh, and not to forget the morning sickness and enduring the kicks of your little one! Actress, Dia Mirza is going through this beautiful phase of her life right now.

Recommended Read: Priyank Sharma Talks About Equation With GF, Benafsha Soonawalla, Amid Rumours Of Cheating On Her

Dia Mirza had risen to fame from the movie, Rehna Hain Tere Dil Mein. Dia Mirza, who has treated her fans with a lot of wonderful films, is quite active on her social media accounts and often shares glimpses of her personal life with them. The actress had surprised everyone by announcing her wedding to long-time beau, Vaibhav Rekhi. She had tied the knot in a private ceremony in Mumbai on February 15, 2021. Recently, Dia Mirza, who often shares awareness posts on protection and conversation of the environment on her IG handle, took to her Instagram stories to share a no-makeup selfie with her fans. The actress was dressed in a green coloured top but the glow that she radiated spoke volumes about how she is enjoying the most beautiful phase of her life i.e. pregnancy. She also added the song, Cansar Voce Vibes by Luisasonza, to the story. Along with that, she added a flower sticker on which we could read "Love Yourself". 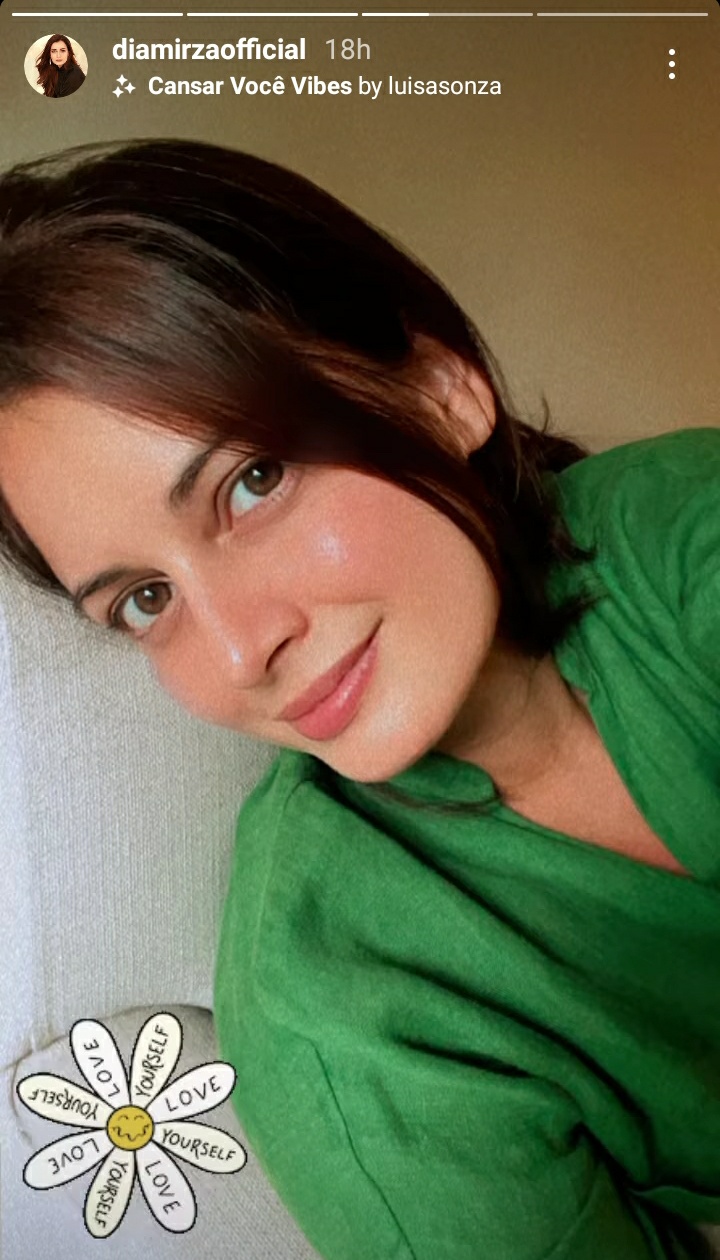 On April 1, 2021, Dia Mirza had surprised everyone by sharing a picture, flaunting her baby bump, two months after her marriage. The actress had written, "Blessed to be... One with Mother Earth... One with the Life Force that is the beginning of everything...
Of all stories. Lullabies. Songs. Of new saplings. And the blossoming of hope. Blessed to cradle this purest of all dreams in my womb. Photo by @vaibh_r" No sooner had Dia announced her pregnancy, netizens started trolling her and stated that her pregnancy was the reason behind her sudden wedding. However, the actress had cleared her stance and given a befitting reply to her trollers. She had said, "Firstly e didn't marry because we were having a baby together we were already marrying as we were going to have a baby while we were planning our wedding." 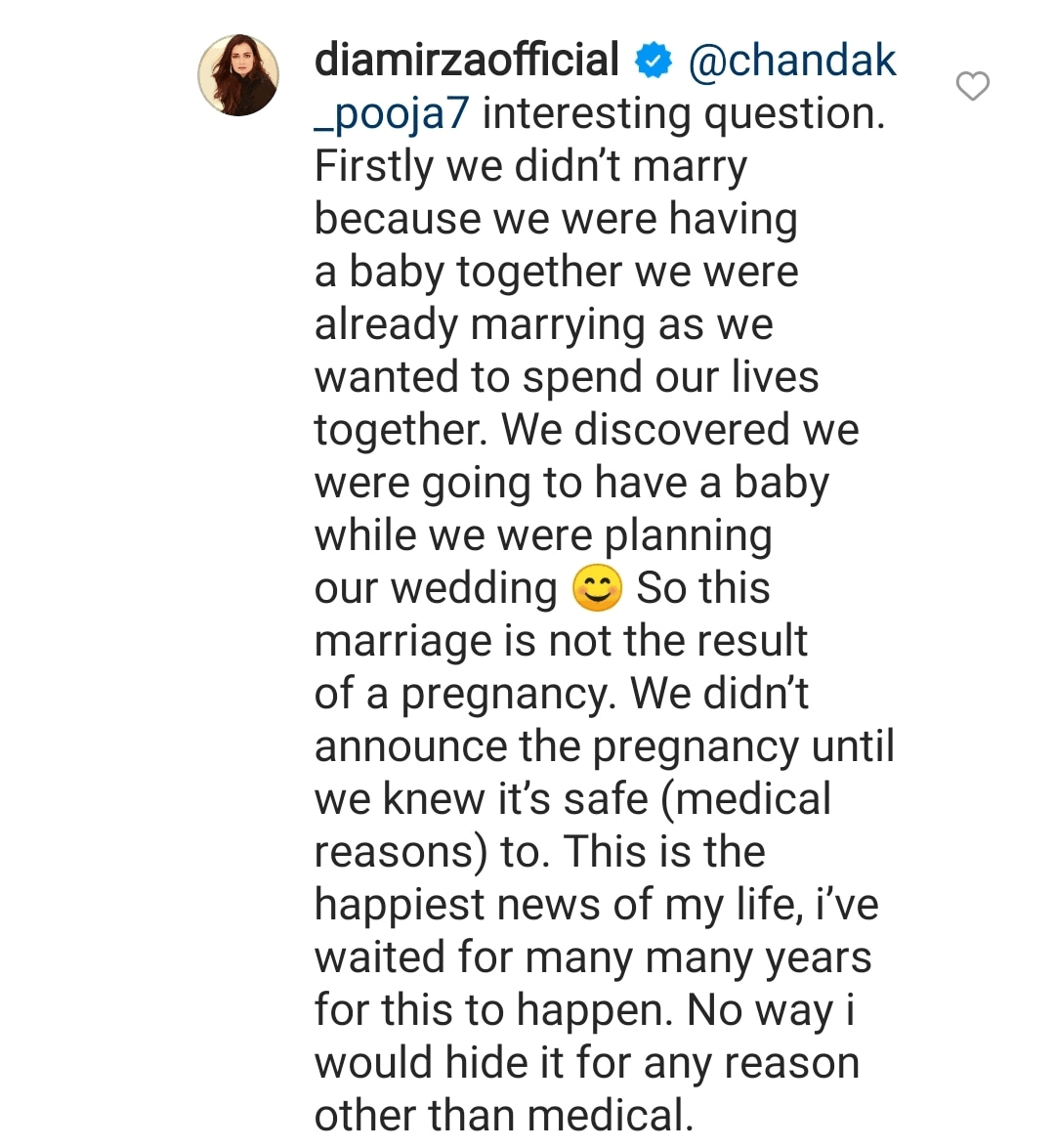 She further added that her marriage was not due to her pregnancy and stated that "So this marriage is not the result of pregnancy. We didn't announce the pregnancy until we knew it's safe (medical reasons) to. This is the happiest news of my life, I've waited for many many years for this to happen. No way I would hide it for any reason other than medical." 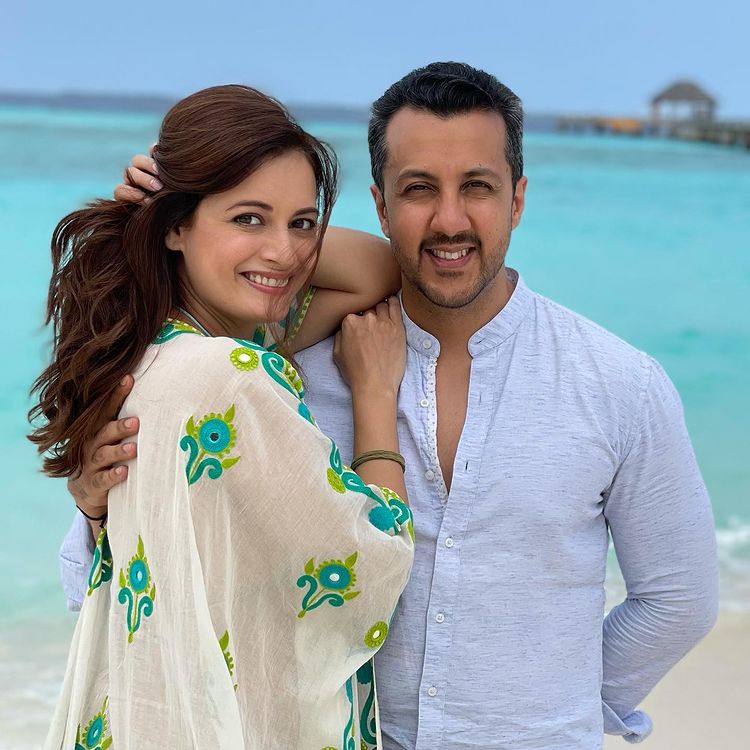 On the work front, Dia Mirza was last seen in the movie, Thappad.