After their mega Italy wedding, the DeepVeer saga continued with the post-wedding functions in India and like how! Deepika Padukone and Ranveer Singh’s last leg of the celebrations took place at Grand Hyatt, Mumbai on December 1, 2018, where the entire film fraternity joined the newly-weds and made it a memorable one.

Recommended Read: 10 Bollywood Ex-Couples Came Under One Roof For Sonam's Reception, Here's What Happened Inside But more than seeing Deepika Padukone in her blood-red Zuhair Murad gown, we were left stumped when some of the new and old flames showed up at her reception. B-town parties have now become so much more than just glamour and fashion. Netizens look forward to witnessing who attends the function and with whom. While some walked hand-in-hand on the red carpet with their ‘special one’, some faced awkwardness being around their dreaded exes at the party. Here’s a list of the old flames and new relationships that came at DeepVeer’s wedding reception. Malaika Arora and Arjun Kapoor have been the ‘centre of attraction’ for the media and netizens for quite a while now. Time and again, Arjun and Malaika’s budding relationship manage to make the headlines. Malaika, who is not a ‘Khan’ anymore, was twinning with her alleged love, Arjun at Deepika and Ranveer’s reception. While Arjun was sporting a new look wearing a white shirt and blue suit with a black hat, Malaika looked scintillating as ever in a blue gown. 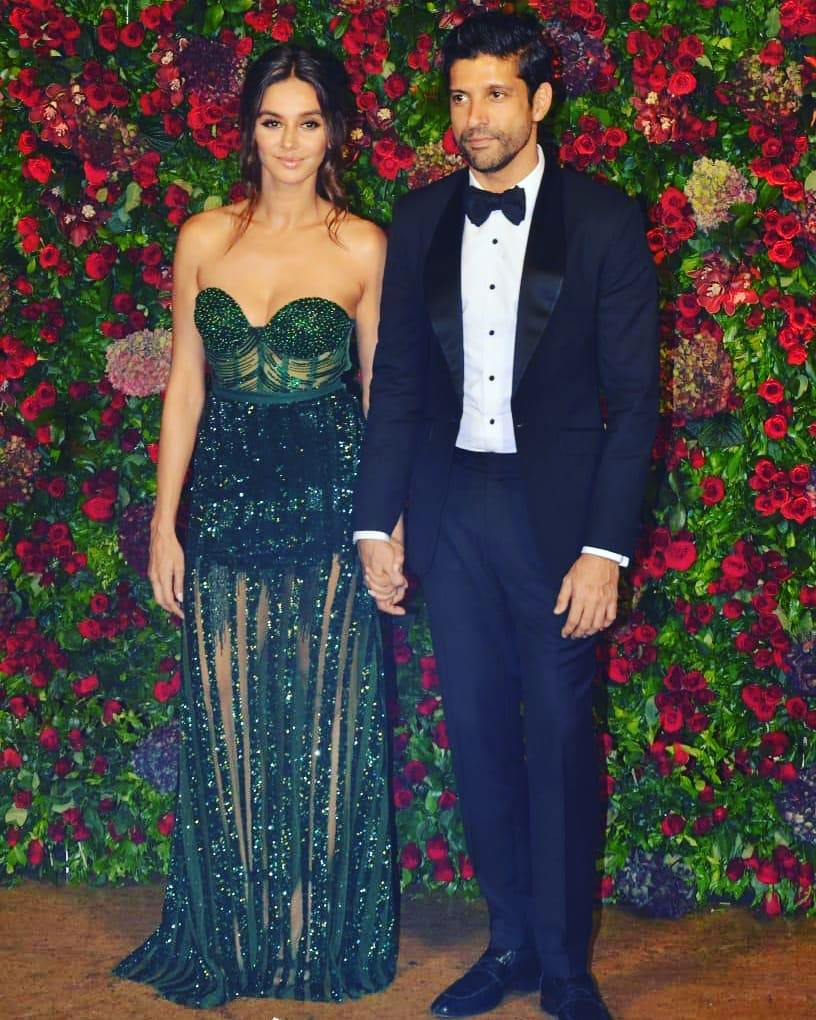 Another ‘couple’, who entered hand-in-hand, posed for the shutterbugs hand-in-hand and went inside hand-in-hand, was none other than Farhan Akhtar and Shibani Dandekar. This time Farhan and Shibani didn’t ‘accidentally bump into each other’ and their appearance together spoke volumes of love. While Farhan looked dapper in a crisp white shirt and black tux with trousers and a black bow tie, Shibani looked stunning in a strapless sheer green gown. It's finally official! 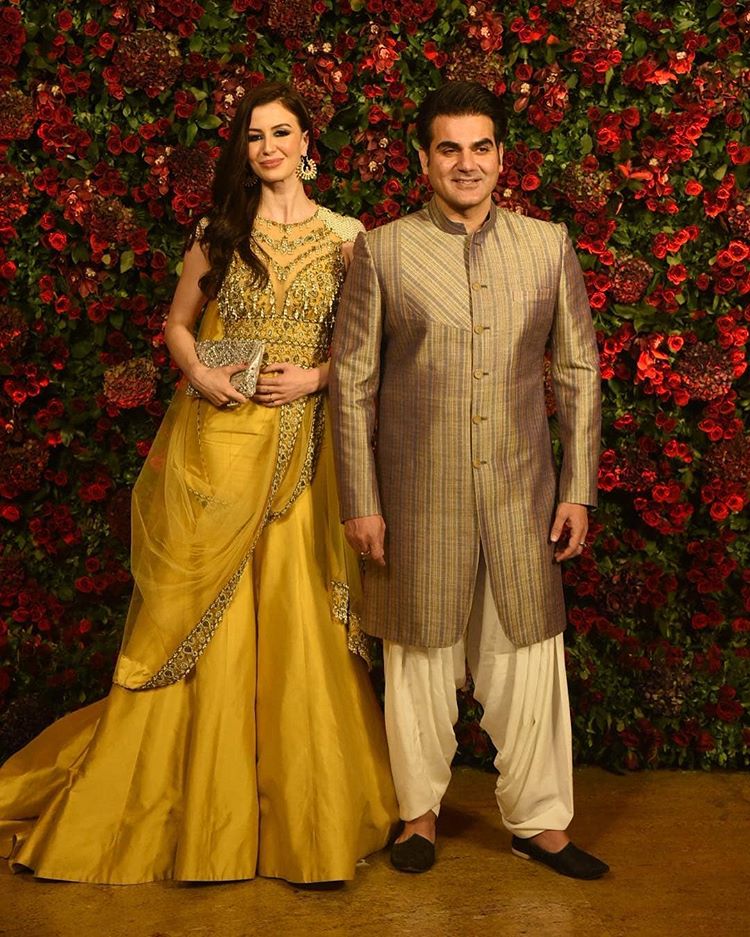 Arbaaz Khan recently confirmed that he is dating an Italian model, Giorgia Andriani, and the lovebirds don’t shy away from making public appearances together. Arbaaz and Giorgia attended DeepVeer’s wedding reception together. While Giorgia looked gorgeous in a mustard coloured gown, Arbaaz sported his traditional best in a copper colour kurta and off-white pyjamas. 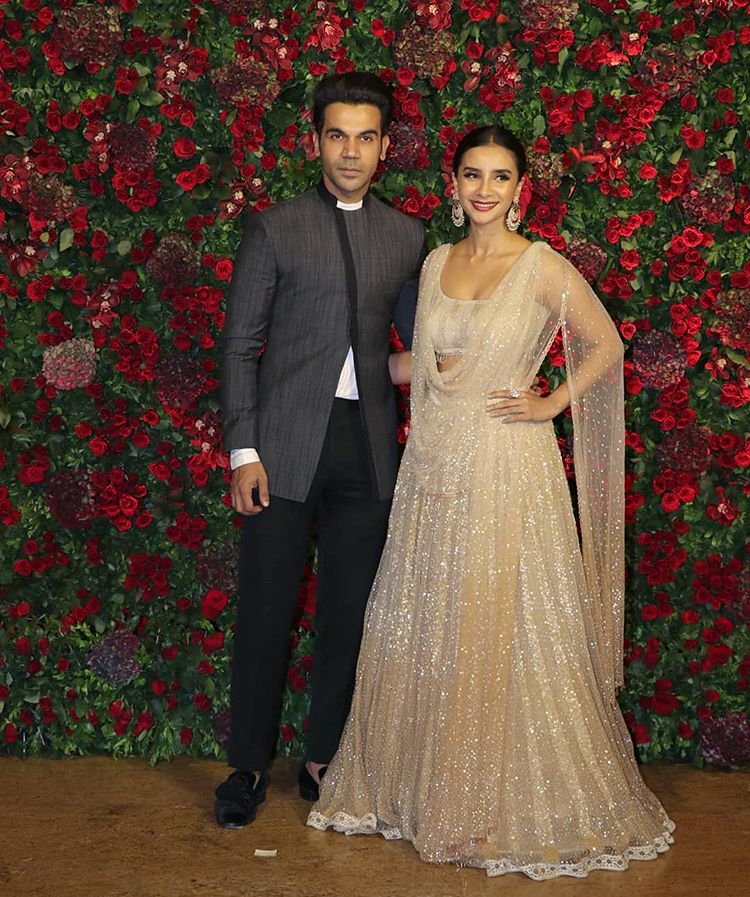 Just as brilliant and talented Raj Kummar Rao is as an actor, even more, romantic is this fabulous actor by heart. Raj Kummar is madly-in-love with his CityLights co-star and fellow actress, Patralekha. This much-in-love couple too walked hand-in-hand at Deepika and Ranveer’s reception. After innumerous speculations about their break-up, Tiger Shroff and Disha Patani rubbished all such reports with their hand-in-hand entry at Deepika and Ranveer’s wedding reception. Making the relationship official, Tiger Shroff walked in with his ‘not so rumoured anymore’ muse, Disha Patani! While Disha wore a boat-neck grey gown, Tiger sported a white tuxedo, white shirt and black pants and trust me you, they looked beautiful.

Also Read: Disha Patani And Tiger Shroff Finally Make It Official By Walking In Together At DeepVeer Reception 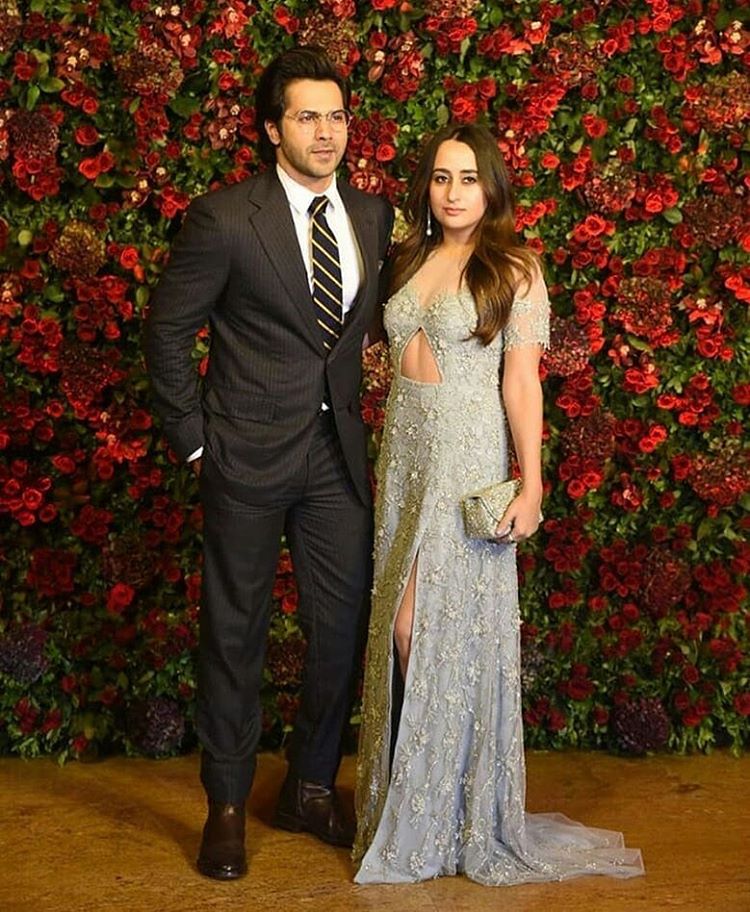 Just recently on Karan Johar’s chat show, Koffee With Karan, Varun Dhawan admitted dating his childhood love, Natasha Dalal and his plans to marry her. And every time, Varun makes an appearance with his lady-love, it is a treat to our eyes. They make for such a beautiful couple, that we can’t wait anymore for their wedding bells to ring in. Earlier this year, rumours were rife that Mukesh Ambani and Nita Ambani’s youngest son, Anant Ambani has also decided to enter the 'Doubles Club', like his twin siblings, Akash Ambani and Isha Ambani. Anant’s love interest, Radhika Merchant was rumoured to be the soon-to-be choti bahu of the Ambani family. Recently with Radhika’s appearance with Anant Ambani and the entire Ambani clan, at Priyanka Chopra and Nick Jonas’ sangeet and Deepika and Ranveer’s reception, it added fuel to their dating reports. Anil Kapoor and Sunita Kapoor’s youngest daughter, Rhea Kapoor has been dating Karan Boolani and the lovebirds are often spotted with each other on vacations and get-togethers. Rhea and Karan’s relationship first came into limelight when Karan dedicated a post for his lady-love, Rhea at Sonam and Anand’s wedding. Karan and Rhea too came at Deepika and Ranveer’s reception along with the Kapoor family.

The Dhadak of B-town, Ishaan Khatter and Janhvi Kapoor made their Bollywood debut together and ever since the beginning of the film’s shoot, their dating rumours have been doing the rounds. Despite Janhvi refuting such ‘conjectures’ on Koffee With Karan, the rumours don’t seem to end. From being gym buddies to hogging on delicious pizza, sometimes it looks like B-town and nation’s Dhadak, Janhvi Kapoor and Ishaan Khatter are the best of friends and other times, we feel there is something brewing between them. Janhvi and Ishaan too partied together at DeepVeer’s reception. As per the reports, Ranveer Singh dated his debut film, Band Baaja Baaraat co-star, Anushka Sharma during the shoot of the film. Anushka and Ranveer never admitted dating each other, but as per the buzz, things fizzled out between the couple because he started feeling suffocated with Anushka. As per the reports, a source stated:

On missing Anushka, Ranveer had shared:

But now the duo, have let bygones be bygones and have happily moved on with their lives. While Anushka is married to Virat Kohli, Ranveer married ‘the most beautiful girl in the world’, Deepika Padukone. Keeping past behind, Anushka graced DeepVeer’s reception to congratulate the newly-weds.

Yami Gautam and Pulkit Samrat had an awkward encounter at Deepika and Ranveer’s reception, courtesy their ugly break up. As per the reports, Yami had also fired her trainer, who was also training Pulkit at the same time, to cut all ties. Yami and Pulkit have also unfollowed each other on social media, and it is still unknown what went wrong between the couple. Though Arbaaz and Malaika have been separated from each other for quite a while now, it was with whom they came at Deepika and Ranveer’s reception, which made the situation awkward. Arbaaz came with his special someone, Giorgia Andriani, Malaika and Arjun grabbed the headlines for their twinning game. 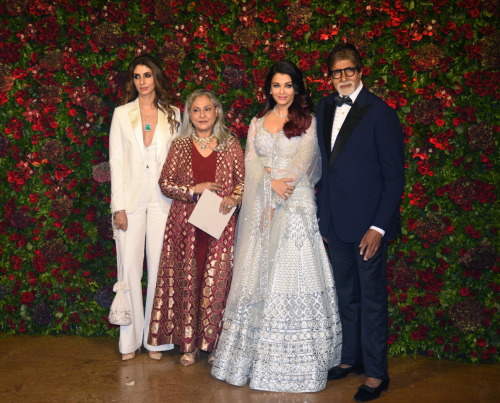 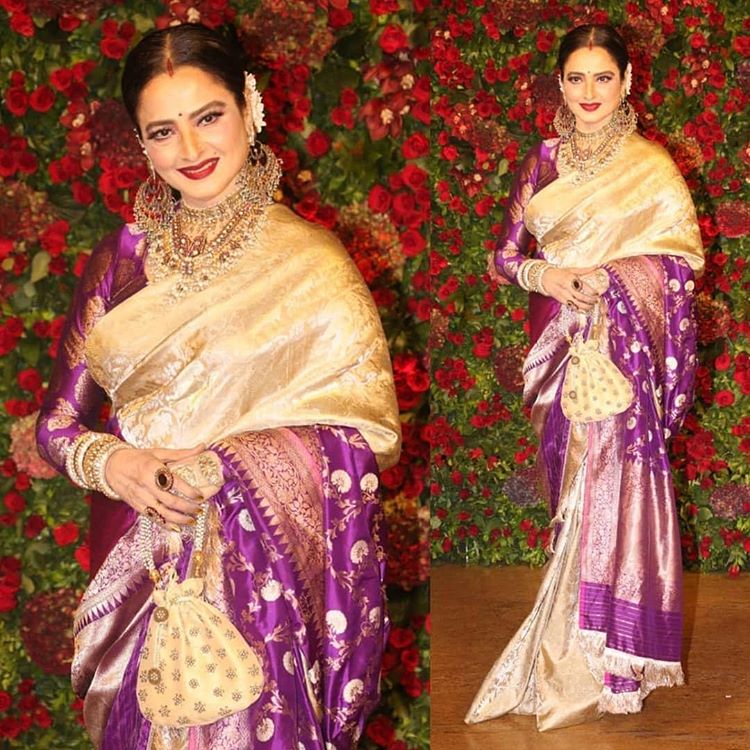 The most-talked about and legendary ex-couple of Bollywood, Amitabh Bachchan and Rekha often bump into each other at B-town functions and one such occasion was DeepVeer's reception. Rekha, as always, came solo, but Amitabh made an appearance along with his family including wife Jaya Bachchan, bahu, Aishwarya Rai Bachchan and daughter, Shweta Bachchan Nanda. 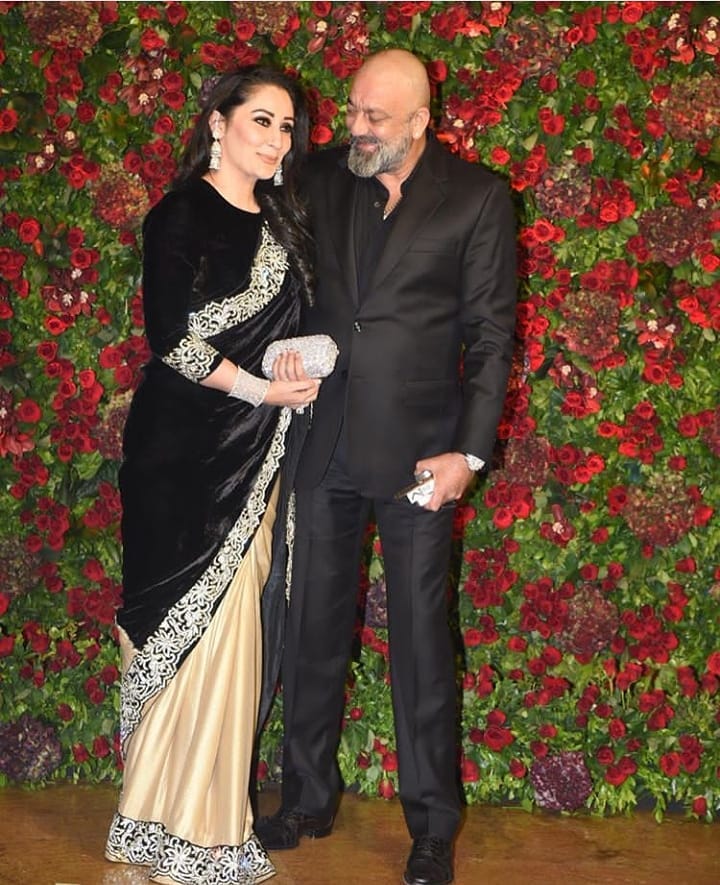 Sanjay Dutt and Madhuri Dixit were a ‘thing’ in the 90s and everyone knew about their torrid affair. After working together in several movies like Saajan, Thaanedar, Khalnayak etc, Sanjay and Madhuri fell in love with each other. While Sanjay Dutt came to Deepika and Ranveer’s reception with his wife, Maanayata Dutt, Madhuri was accompanied by her husband, Dr Sriram Nene. 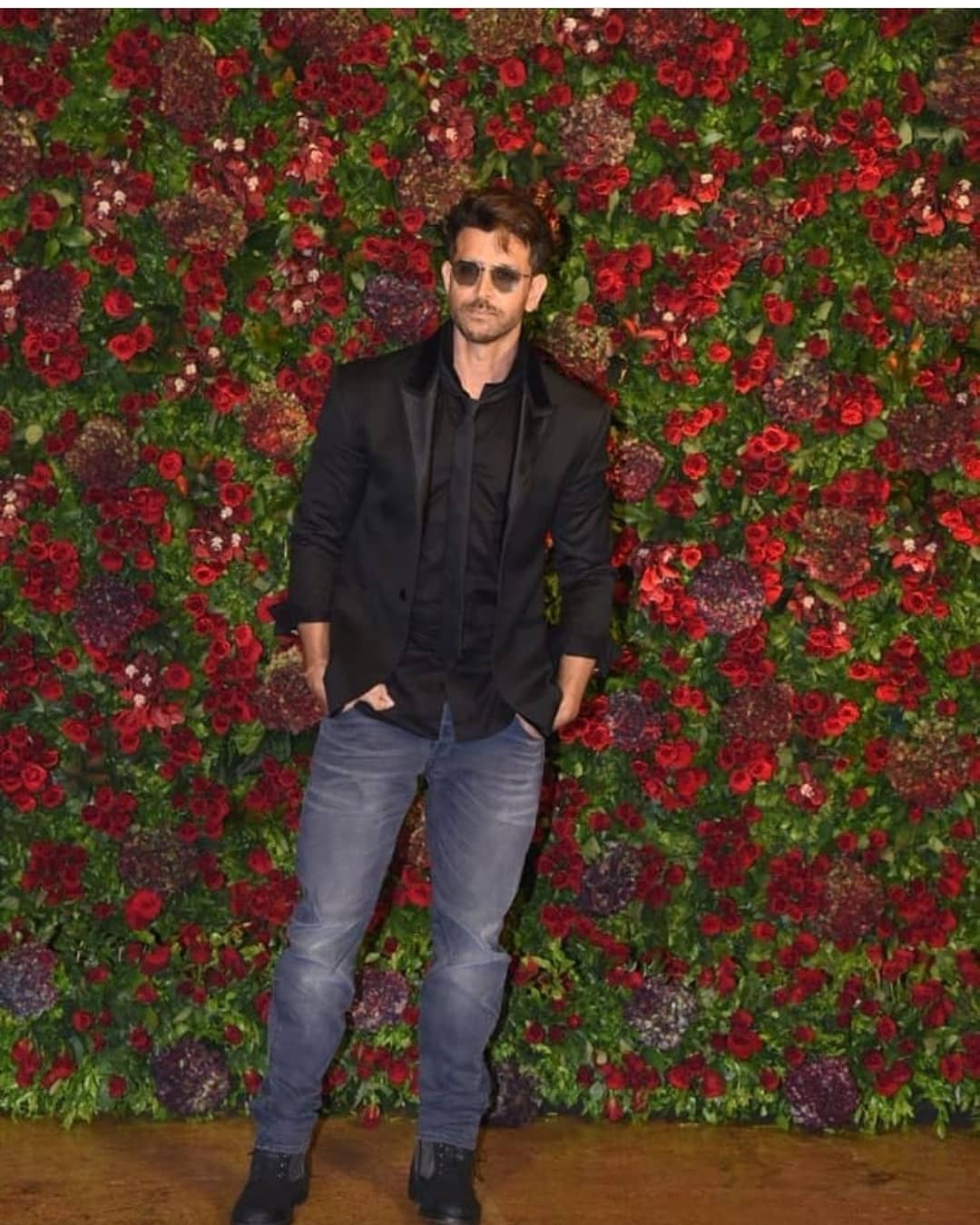 As per the reports, Hrithik and Kareena were completely smitten by one another and have fallen for each other, in spite of the fact that Hrithik was already a married man. The reports further stated that the repercussion for their affair was his family intervening and asking the lovebirds to maintain distance. While Hrithik came solo at DeepVeer’s reception, Kareena was accompanied by her husband, Saif Ali Khan, sister-in-law Soha Ali Khan and Kunal Kemmu.

Next Read: Amitabh Bachchan, Aishwarya, Jaya Dances Crazily With Deepika And Ranveer At Their Mumbai Reception