Many television and Bollywood celebs tied knot in 2017. Right from Naman-Neha, Smriti-Gautam to Bharti-Haarsh and Aashka-Brent to name a few, many of our favourite celebs entered the next major phase of their lives. Amongst all these artists, there are celebs from cricket world too who have decided on to be forever with their potential better halves.

Recommended Read: Bharti Was Missing From The First Function Of Her 'Shaadi', Here's How The Family Celebrated It

While famous cricketer Zaheer Khan just got married to the love of his life and Bollywood actress Sagarika Ghatge (read more), there is another celeb from the cricket world who entered the doubles’ club in 2017. We are talking about none other than, Indian cricketer, Bhuvneshwar Kumar.

Well, just some time back only we shared with you some lovely pictures from his pre-wedding functions - haldi and mehendi. Bhuvneshwar Kumar got married to a Noida-based girl and engineer by profession, Nupur Nagar on November 23, 2017. The wedding took place in Meerut at Bravura Gold Resort in the morning.

You May Also Like: 'Meri Aashqui Tumse Hi' Fame Actress Looked Like A Doll On Her Mehendi Ceremony, Pics Inside

The groom, Bhuvneshwar chose to wear a golden sherwani teamed up with red-coloured padgi. On the other hand, the bride looked like a princess in a red-coloured lehenga that has gold work on it. Right from her make up to the jewellery that she wore, everything was minimal but on point! Here are the pictures and videos of the wedding. And how can we forget the elegant chooda that she is wearing.

Here are a few more pictures and videos from Bhuvi's (as his fans fondly call him) wedding:

Don't Miss: Aashka Goradia's Bachelorette Cake Has The 'Naughtiest Message' And We Haven't Seen A Cake Like This

Also Check: After An Arranged Marriage, Actress Prarthana And Husband Get Their Wedding Date Tattooed

For the ones who don’t know, the player first met the love of his life when he was just 13 and she was 11, and so their love tale began. In a candid conversation with Shaadisaga, the bride-to-be Nupur was quoted as saying:

"He (Bhuvneshwar) proposed! First through a text message over a game of question-answers, then over a phone call, and lastly gathered the courage to say face to face."

Team BollywoodShaadis would like to convey its heartiest wishes to the newlywed couple, Bhuvneshwar Kumar and Nupur Nagar on stepping in to this lovely phase of their lives. And all you guys, stay tuned with us right here to get the latest updates related to your favourite celebs!

NEXT READ: Virat-Anushka's Delhi Reception Was A Grand Affair, Virat's Bandhgala Was Nothing Ordinary 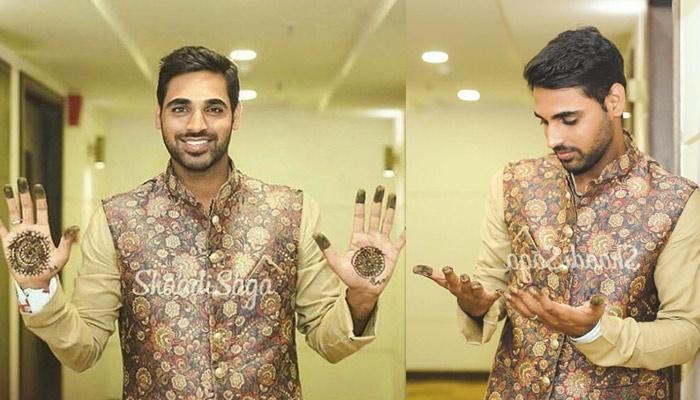 Wedding season is here and so are the marriages in the tinsel town. Fans love their favourite celebs and are even more in love with the happening of their real life. And one such thing amongst many others is their wedding. 2017 boasts of a long list (like literally long one!)