Chhavi Mittal took to Instagram and posted a picture with her little one, Arham Hussein, sleeping by her side and wrote a note. The two hashtags which had accompanied the post were hilarious! 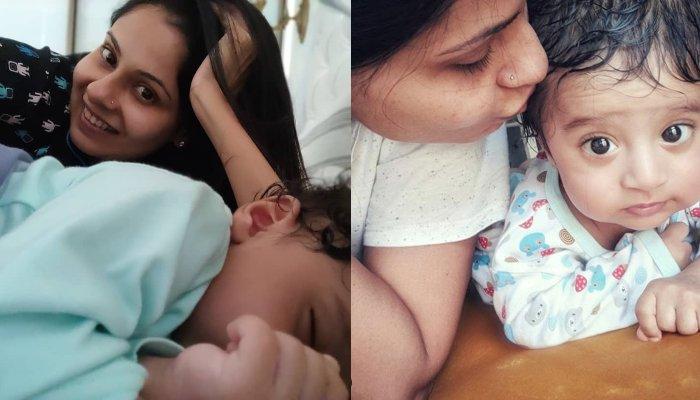 Mommies-to-be and newbie mommies these days adorn pregnancy like a beautiful accessory and not as a means to put them down. Nurturing a life inside you and taking care of that little lub-dub after he/she is born is no cakewalk. But that doesn’t deter modern-day mums from following their passions. And speaking of one celeb mommy who can correctly balance work and family is none other than the super-momma, Chhavi Mittal! (Do Read: Surveen Chawla's Five-Month-Old Baby Girl, Eva Makes Her Television Debut, Video Inside)

Chhavi Mittal’s preggy diaries had encouraged millions of to-be moms out there. From putting forward common pregnancy-life issues to what she does to simply those challenges hurled at her, all that we want to do is ask this wonder-momma, “How do you tackle so many things with such ease?” Post-partum too, Chhavi has time and again, been sharing her life as the mother of two kids and how she tackles work, sleep and of course, her family! In her latest Instagram post, Chhavi’s catchy first line and the hashtags thereafter, will make you go all ROFL (Rolling On Floor Laughing, silly!).

Chhavi Mittal took to Instagram and posted a picture with her little one, Arham Hussein, sleeping by her side and wrote a hilarious note. The same could be read as “Sleeping next to another man! Don't be jealous @mohithussein, 'coz there's another man I like sleeping next to more than you! My cutie little @arhamhussein is a doll to sleep next to. But the only problem is, I don't sleep much when he's lying next to me. Why? Not because he keeps me up, but because I just can't stop staring at him! #creep #mom.”

It was on July 11, 2019, when Chhavi Mittal had first introduced world’s youngest YouTuber to us. A day later, she had posted an adorable full-face picture of Arham (a still from an SIT episode) and had written, “Yesterday was overwhelming. My darling baby @arhamhussein made his debut on SIT! A little something that people don't know about the shoot... we shot for full 12 hours, out of which this little star came on set for all of 5 minutes, and gave us 20 different reactions to insert! Then I took him away to his room, where he slept like a baby (er.. he IS a baby after all). It was almost as though he knew that mom and dad are shooting today and he should stay calm on the sets. He felt uncannily home on a shooting set. Well thank GOD for that, since just a day before he had cried all day due to colic and we got such a scare that we almost called off the shoot! Since both Mohit & me didn't feel like leaving him or taking him along if he felt uncomfortable. So thank you little Arham for allowing my transition back to shoot to be smooth. You're already so considerate! #littlearham.” (Also Read: Raveena Tandon Is Soon Going To Be A 'Nani', Hosts Daughter's Baby Shower, Pictures Inside)

Chhavi Mittal, a few days back, had taken to Instagram and had posted a heart-warming picture of a brother-sister moment, wherein Arham Hussein and Areeza Hussein were looking at each other with lots of love and naughtiness in their eyes! She had captioned the picture as “The lovely sight I get to see first thing in the mornings. When little @arhamhussein and little @areezahussein just look at each other, smile at each other and shower bliss around. Sometimes she sings to him and he just cannot wipe the toothless smile off his face, his eyes following her around when she's dancing. Is there any other spot in the world that is more beautiful and serene than this one? Why do we search for peace outside, when we are well-equipped to find it right where we are at all times? #recognisingbeauty #blog #blogger #chhavimittal #arham #son #daughter #brothersisterlove #motherdaughtergoals #motherson #peace #peaceful #joy.”

And a day later, came a back-up post by Chhavi Mittal to the aforementioned one with a strong message on letting children grow at their own pace. She had penned, “Yesterday I shared a post with little @arhamhussein where he was seen with sister @areezahussein. I couldn't help but notice a similar response from many parents. "My LO is not holding his/her neck yet, how old is Arham". Dear parents, Let's not start putting pressure on our LOs at this tender age itself! Pressure to be first. First to hold their necks, start turning, sitting, talking, walking... This is how performance pressure sets in.. the habit of always being in a race. To come first in class, have the best job, earn the highest salary, driving the fanciest car, living in the fanciest house... the list never ends. My post was about the simple joys that define our whole life.. and many of you missed the joy, and found a dampener in the form of your LO not lifting his/her neck!” (Must Read: Amy Jackson Shares Lovey-Dovey Pictures To Celebrate Fiance George Panayiotou's Birthday)

Chhavi Mittal’s note had further continued, “Every baby/child/mother/human being is different. Everyone has their own qualities, shortcomings, habits, idiosyncracies... Let's not compare.. but try to find the best within our own lives. Having said that, I also take this opportunity to once again stress on natural labour! I feel, my little @arhamhussein has crossed his first milestone of lifting his head beautifully beacuse I allowed him to stay inside the womb for as long as he wanted to. I did not induce although it became increasingly difficult during the last few weeks. I felt it has made a HUGE difference in his early developmental skills. Hence, unless there is an emergency, maybe my pregnant friends can try to go as natural as possible too! Meanwhile, share with me what your LO does best that defines him/her and makes him/her different from the rest! #Littleone”

Lots of love to you, wonder-woman!