Chahatt Khanna has always been vocal about her personal life. In a recent interview, she opens up about her battle with depression. 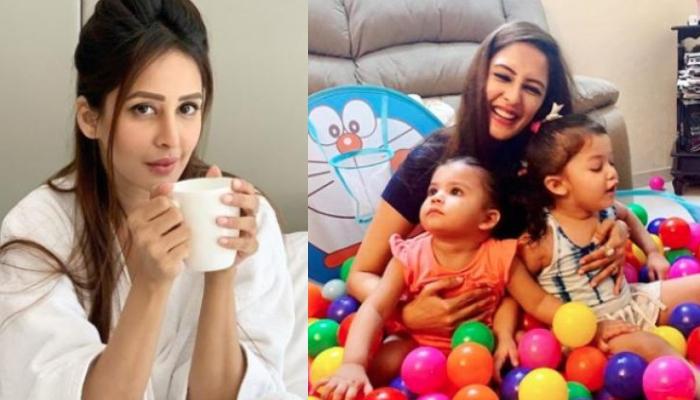 Looking at a celebrity, we often envy their glamourous life, but all that glitters is not gold. A lot of dedication, hard work, and sleepless nights make them a star, but with stardom, there is a heavy price these celebs pay. As a public figure, a celeb hardly enjoys a private life. Whatever they do, becomes news. Whether it is family dinner, vacation, breakups, or patch-ups, they are constantly under the radar of paparazzi and become a victim of trolls. On such celebrity, who has been taking up all the trolls with a brave face is television actress, Chahatt Khanna. (Also Read: Sonam Kapoor Ahuja Shares Glimpses Of How She Is Spending Her Quarantine With Hubby, Anand Ahuja)

Bade Acche Lagte Hain fame, Chahatt Khanna had tied the knot with Farhan Mirza in February 2013. After five years of marital bliss, the couple had decided to part ways. She has two beautiful daughters, Zoharr and Amaira and the doting mother makes sure to provide everything best for her little munchkins. She has often been trolled for her single mother status, and the beautiful actress always makes sure to give it back to her haters. Recently, Chahatt had deactivated her Instagram handle, and in one of her befitting replies to her haters, she had hinted about her depression.

In an interview with The Times of India, Chahatt Khanna opened up about her struggle with depression and how she is battling it in a healthy manner. She also stated that she is connected with her counsellor through video calls. Revealing that she didn’t know much about depression, Chahatt said, Had I known it (depression), toh bahut aasaan ho jaata, mere aur mere counsellor ke liye (it would have been easy for me and my counsellor) to rectify that point. We don’t know where it comes from, where it vanishes and goes back. I don’t know much about it.”

She also talked about staying away from negativity to fight with depression in a healthy way and how she is taking a break from social media. Revealing details about the same, she said, “It’s just that I am dealing with it and coming out of it in a healthy and most challenging way. I just wanted to stay out of the whole fake world and do something real in my life. So, I thought, let’s take a break from people, social media and everything which glitters. I’m in constant touch with my counsellor via video call.” (Also Read: Karan Johar's Kids, Yash And Roohi Want Their Daddy To Remove His Clothes And Take A Shower)

In May 2020, Chahatt Khanna had deactivated her Instagram account, but before doing that, she had lashed out on haters, who had slammed her for being a single mother. Hitting back at the troll, Chahatt had shared an Insta story, “Witches and bitches who can never get love, bf or family in life, forget about kids, they will never understand that kids a blessing and not a liability, or target to put a woman down.” In another Insta story, she had written, “No I am not running away, just that I’ll be busy with work, for a few days.”

Chahatt has always given glimpses of her personal life through her Instagram handle, and it was a picture of her with daughters, Zoharr and Amaira that had raised speculations about her split with husband, Farhan Mirza. Her picture with Zoharr and Amaira had the hashtag, ‘single mom’. And later she had confirmed about her separation with Farhan.

In another interview with the Zoom, Chahatt Khanna had revealed how and when she realised the term ‘single mother’ as insulting. Chahatt had stated, "It is a very insulting term, and I realised this much later. There is a term called Milf which these guys, doggers use for women who are elder to them, married, single parent, single mom, divorced and they think people like them are good to have fun with. This is a hard-hitting fact of our society which I just discovered a few days back and I was shattered when I came to know this. This is what happens when she steps out of her marriage." (Also Read: Mahhi Vij's Daughter, Tara Jay Bhanushali Tastes Her First Ice-Cream, Looks Adorable)

Stay strong Chahatt! Here’s wishing all the best for your future endeavours.