Fashion Styling Tips To Wear A Corset Like The Divas!
Home / For Brides

The year 2022 witnessed some magical celebrity weddings, which were filled with love and just love. However, it is the bride's look, as always, that made us pause and admire her beauty. Whether it was Alia Bhatt's pristine ivory saree or Hansika Motwani's traditional red lehenga, we fell head over heels in love with their beauty, which they radiated during their wedding festivities.

We all will agree that every bride looks super gorgeous on the most special day of their life. However, there is always a dash of uniqueness that every bride carries. After all, they all want to set the trend and look different. Let's take a look at some of the prettiest celebrity brides and their wedding outfits.

Karishma Tanna Is Excited To Get Married To Varun Bangera, Shares A Picture Ahead Of Her Wedding

Recommend Read: 8 Anamika Khanna Brides Who Stole The Show On Their Wedding Day With Their Rare Lehengas And Sarees 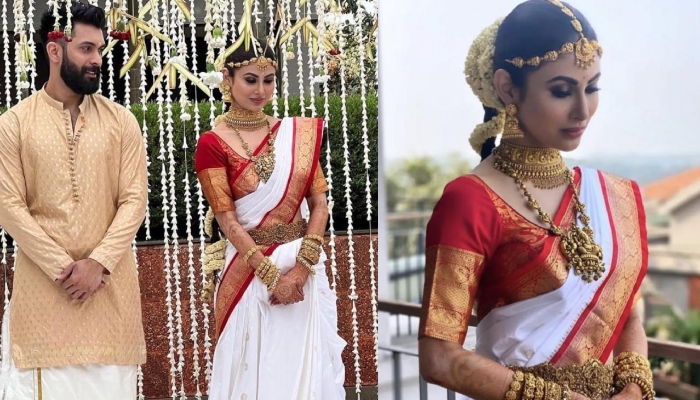 Indian actress, Mouni Roy got married in Goa to the love of her life, Suraj Nambiar. Her wedding day looks still give us goosebumps as she radiated the bridal glow in her South Indian marriage. Mouni kept her look minimal in a white silk saree with golden and red borders. She styled her look with a half-sleeve blouse. Mouni had worn the traditional antique gold temple jewellery. Her long pendant chain had Lord Ganesha carved on it, and along with it a choker, stacked kadas, jhumkas and a matha patti completed her South Indian bridal look. 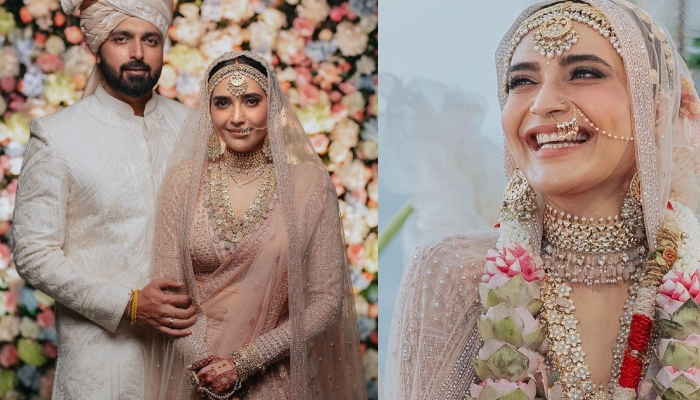 Karishma Tanna got married to Varun Bangera on February 5, 2022, in Goa. The actress stunned in a pastel pink lehenga from the designer duo, Falguni and Shane Peacock. Karishma kept her look subtle yet striking with a choker neckpiece, a haar, matha patti and a nath. The best part about her bridal look was that she chose minimal makeup for her wedding day. Soft dewy sheen look with soft eyes completed her look. 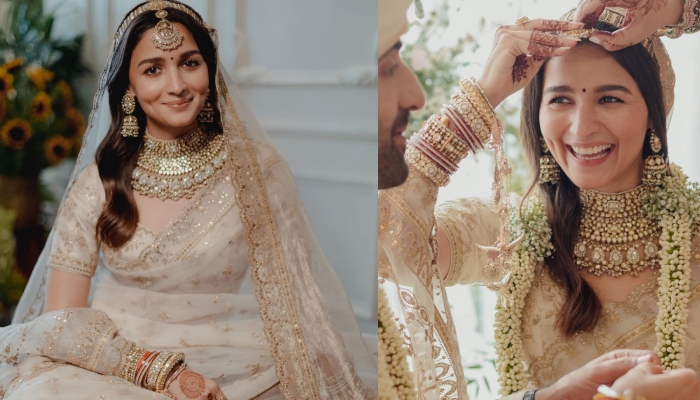 Alia Bhatt became Mrs Kapoor after getting married to Ranbir Kapoor in an intimate wedding ceremony. From her wedding look to pictures from her wedding festivities, everything was filled with love. Alia donned a Sabyasachi Mukherjee saree. Her blouse had butterfly motifs. Alia's minimal look left the entire nation in awe. Another highlight of her wedding day look was her kaleeras, which featured stars, clouds and bird trinkets in gold.

Karan V Grover and his longtime girlfriend, Poppy Jabal's wedding left the entire nation surprised. Poppy looked prettiest in a white lehenga, which she teamed up with a sleeveless choli and a sheer dupatta tucked on her head with real flower embellishments. Poppy styled her look with a choker neckpiece, oversized maang teeka, which covered her forehead, baby pink chooda and statement kaleeras, which featured tassels, shells and flowers.

Also ReadCeleb Brides Who Donned Saree With A Veil On Their Wedding: Alia Bhatt, Dia Mirza To Katrina Kaif 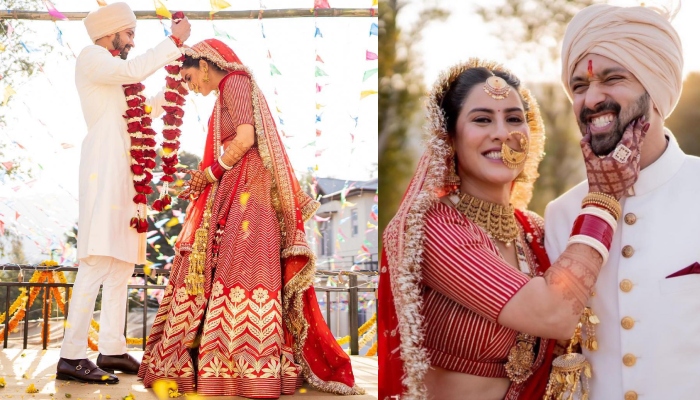 Vikrant Massey and Sheetal Thakur got married on February 22, 2022. The bride, Sheetal picked a red lehenga from designer, Anita Dongre's collection. Her outfit was accentuated with gold embroidery and blooming flower motifs. She looked like a complete Himachali bride with her golden fringe dupatta. Sheetal added a traditional touch to her look by donning a tehri nath. Farhan Akhtar said 'I Do' to his longtime girlfriend, Shibani Dandekar, in a Christian ceremony in Khandala on February 19, 2022. The bride, Shibani picked the most gorgeous red-hued fish-cut dress, which was custom-designed by the designer label, Jade by Monica and Karishma. It was made from French Chantilly lace and hand-embroidered by their master artisans. The sheer red veil had completed her look. 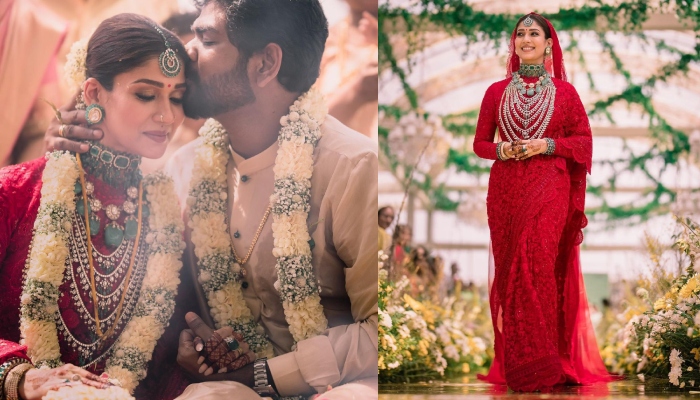 For her South Indian wedding, Nayanthara ditched the silk saree and wore a lacy vermillion red saree from JADE by Monica and Karishma. The designer had reimagined Goddess Lakshmi motifs as bajubandh on the sleeves of the blouse. In addition, the Fourth Vow running across the ensemble has been personalised with the couple's names, symbolising togetherness, commitment and mutual respect. The bride accentuated her look with statement emerald jewellery. 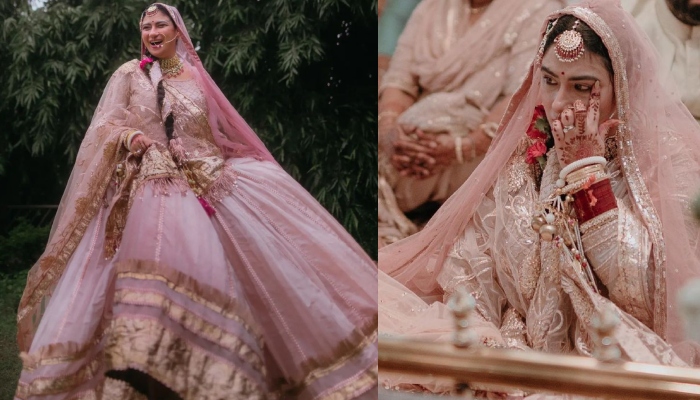 Indian actress and spoken word poet, Priya Malik got married to the love of her life, Karan Bakshi in an Anand Karaj ceremony. She donned a pastel pink handwoven tissue lehenga. It was made with accentuated Hyderabadi suchha-gota and handwoven in real zari embroidery. Priya added a traditional touch with parandi. 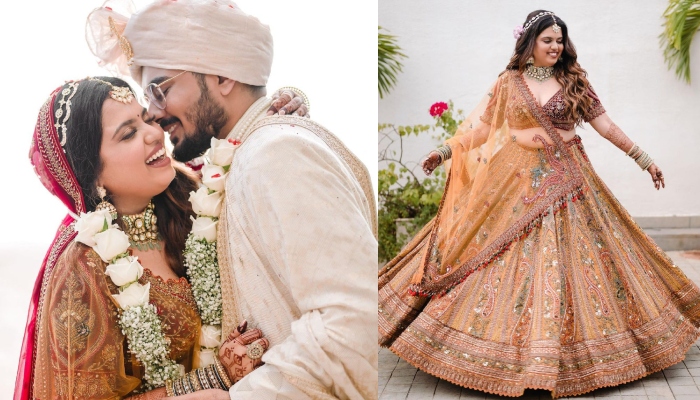 The stand-up comedian, Aishwarya Mohanraj got married to her longtime beau, Aakash Shah. The bride looked gorgeous in a green-hued lehenga. Her outfit featured a heavily embroidered lehenga skirt teamed with a heavy princess-cut blouse. She styled it with double dupattas. The first one was carefully tucked on her shoulder, while the other one in red was pinned over her head. She accessorised her look with a choker neckpiece, matching earrings, and a maang teeka. 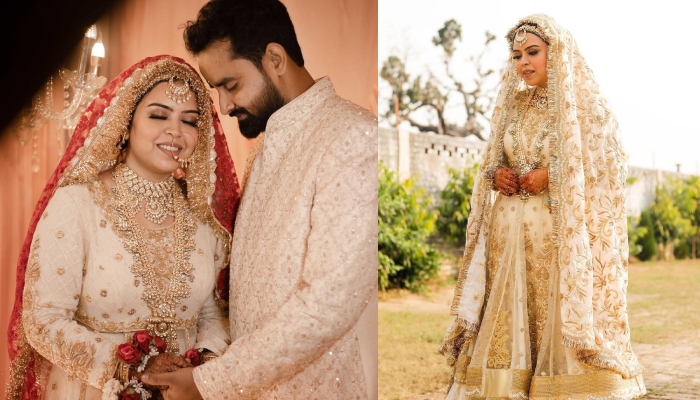 Shoaib Ibrahim's sister, Saba Ibrahim, who is a famous content creator and Vlogger, said qubool hai in November 2022. Saba radiated bridal goals in a golden heavily embroidered kurti, which was paired with a white top and lehenga with golden borders. Her look was accentuated with a matching golden dupatta with heavy kiran dupatta. 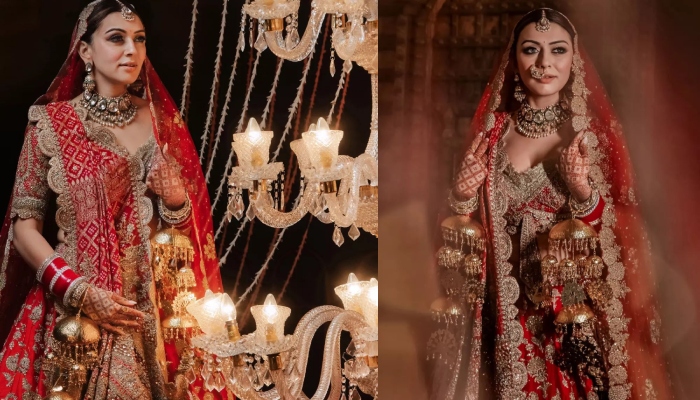 Hansika Motwani radiated royal vibes for her winter wedding with Sohael Kathuriya in Rajasthan.The gorgeousness donned a regal look for her wedding day. Her lehenga had a stunning peacock motif. However, it was the skirt panels which were designed with floral motifs and gleaned from 18th-century brocade fragments as well as Mughal miniatures. Her Banarasi zari dupatta was layered with a handcrafted bandej pattern. She had accentuated her look with polki choker neckpiece, a nath, and a maang teeka.

Well, the celebrity brides of 2022 gave us major fashion goals. They didn't follow the trend but rather their heart's calling and picked pretty ensembles for their wedding festivities! Who is your favourite celebrity bride?

Karishma Tanna Is Excited To Get Married To Varun Bangera, Shares A Picture Ahead Of Her Wedding