Indian film producer, Boney Kapoor and his daughters, Janhvi Kapoor and Khushi Kapoor share a very warm bond. Checkout why Janhvi is proud of her father.

Daughters are always going to be their daddy dear’s little girls. No matter what, fathers are always one of the first men in a girl’s life to be so protective. Right from keeping an eye on whom you are dating to giving looks to your male friends, fathers will always be fathers for their love for their angels is irreplaceable. Such is a camaraderie between famous Indian film producer, Boney Kapoor and his daughters, Anshula Kapoor, Janhvi Kapoor and Khushi Kapoor.

It was a sudden jolt of shock when legendary actress, Sridevi left for her heavenly abode and the entire nation woke up to this gloomy news on February 24, 2018. The void will always be there in the lives of Boney, Janhvi and Khushi, and no one can replace her in their lives. Not just once or twice, but we have come across many instances when Boney Kapoor has broken down in the memory of his beloved late wife. (You May Also Like: Aditya Pancholi's Son Sooraj Pancholi Is Now Dating A Famous Brazilian Model, Details Inside) 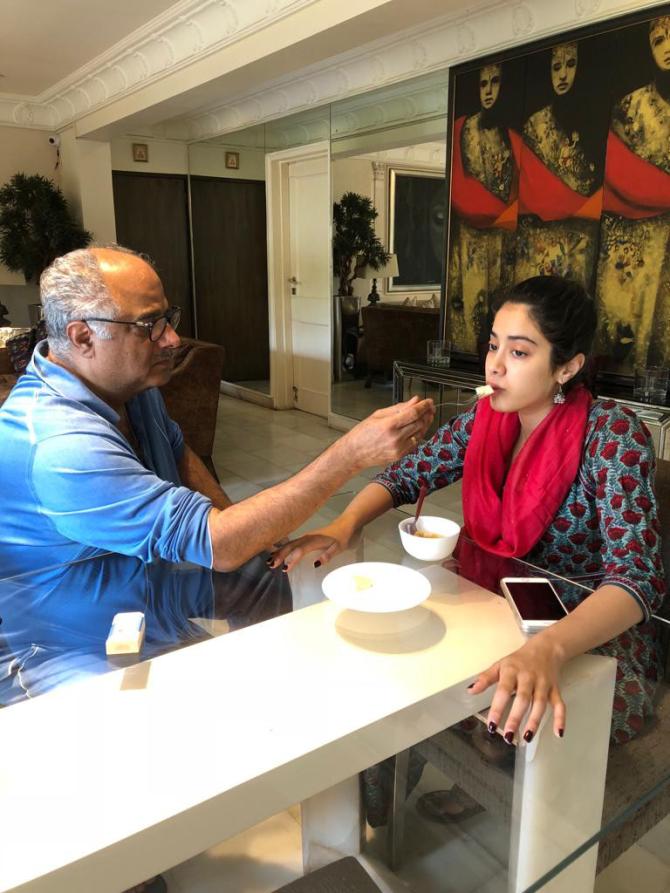 Nonetheless, the trio has finally come to terms with the reality and are living together giving support to each other. Kapoor khaandan is one such family which is quite active on social media. Every now and then, they keep updating their Instagram posts and stories. Similarly, recently, Janhvi took to her official Instagram handle and shared an Instagram story and she seems to be proud of her dad, Boney Kapoor for he has lost whopping 12 kilos in the past few months. Yes, you read that exactly right! Janhvi shared the picture of her dad atop which she wrote, “Papa lost 12 kgs!!! Slim trim and healthy so proud!!! #Finally.” Checkout: 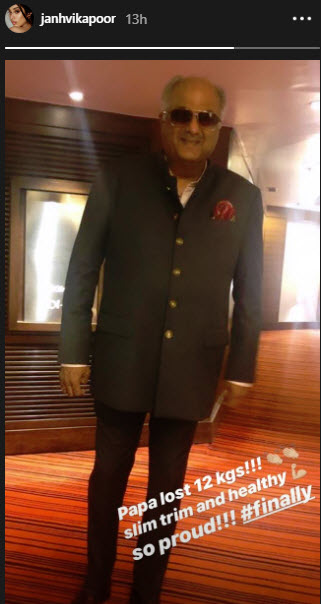 In an interaction with media once, Janhvi had gone on to reveal how her parents, Sridevi and Boney Kapoor used to react to her dating life. The budding actress had remarked, "Mom and dad were very dramatic about it (dating). (They would say) ‘when you like a guy, come to us and we’ll get you married.’ And I’m like what!? You know we don’t have to get married to every guy we like. Like we can be chill also." And when Janhvi would ask Sridevi to be chill, Sridevi would be like, "Like chill, what does chill mean?" (Also Read: Chhavi Mittal's Emotional Post For All Mothers Is Very Motivating And Inspiring, Check Inside) 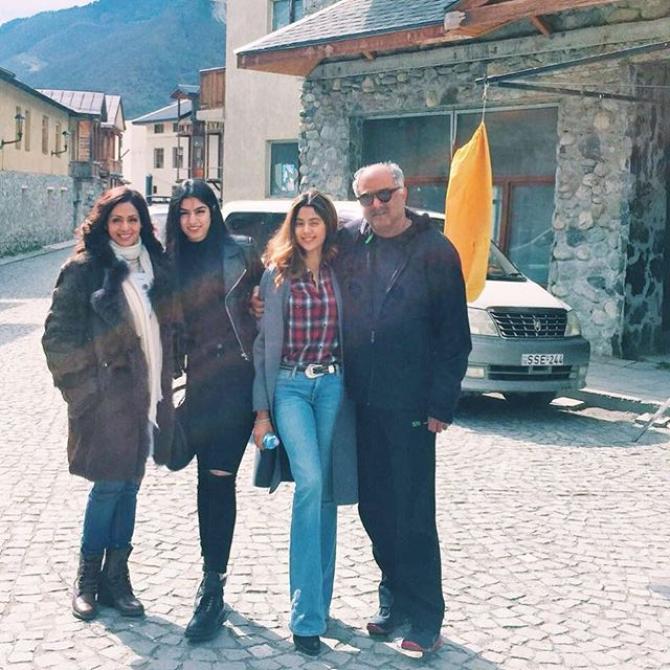 In another interview, she had revealed, "Dad screens all my dates, except for the fact that I don't have many dates. Because papa thinks no boy ever is good enough for me." When asked what dad, Boney Kapoor thinks about her "friend" Ishaan, Janhvi said, "Dad thinks Ishaan is a lovely actor and he is very talented. He is a very nice boy." 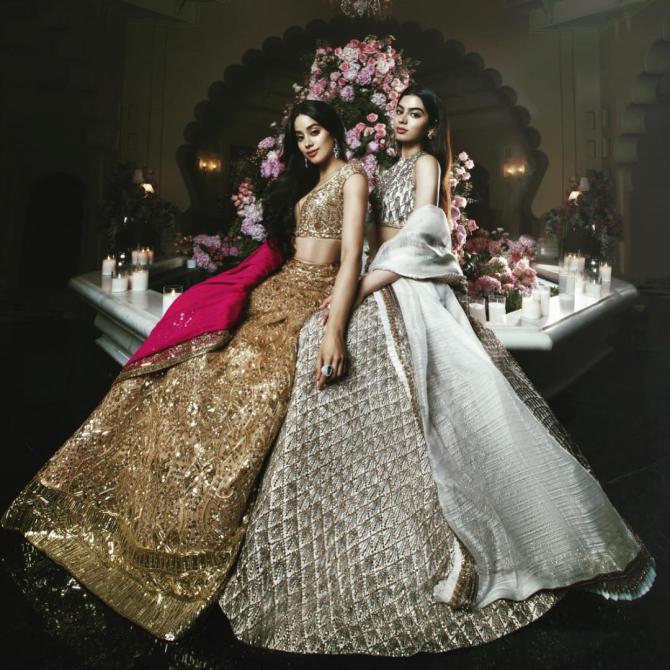 On Neha Dhupia’s chat show, BFFs With Vogue season 3, when the host had asked Khushi, “Khushi, you’re 18. I’m curious to know what sort of trouble you get into?” To this, Khushi Kapoor had replied, “Curfew! Where am I? Who am I with? Once my dad sent a message to my friend saying, ‘Hey beta! Send a photo of you and Khushi.’” Probing further, Neha had asked her, “Is your family okay with you dating or do you have to sneak around?” To this, Ms Kapoor had retorted, “I think dad is open to the idea of me having a potential boyfriend.” (Checkout: Benafsha Soonawalla-Priyank Sharma's Romantic Lunch Date Amidst Major Fight Rumours, Pics Inside) Once Janhvi had talked in length about sisterhood with Khushi and was quoted as saying, “We share our clothes, but we have this thing that if you steal without telling, then it’s a thing. At this point, I don’t care. She still like... She’s very righteous, so she is like, ‘You cannot take something without asking.’ She feels like she needs to inculcate manners in me. So that’s where it’s coming from.” Narrating an incident of an endearing mother-daughter relationship shared with her late mother, Sridevi, Janhvi Kapoor had said on a show, “This was a little after I told my mom I wanted to act. We had an argument about something. And I started crying a lot. And she was trying to explain something to me. I was really crying and she looked at me and said - “You look good when you cry. It’s good for an actor. I feel bad for you already”. And I was like, mom, you really need to feel bad for me now. Not just from an actor’s point of view.” (Also Read: Rishi Kapoor Completes 8 Months Of Cancer Treatment In New York, Tweets An Emotional Post) 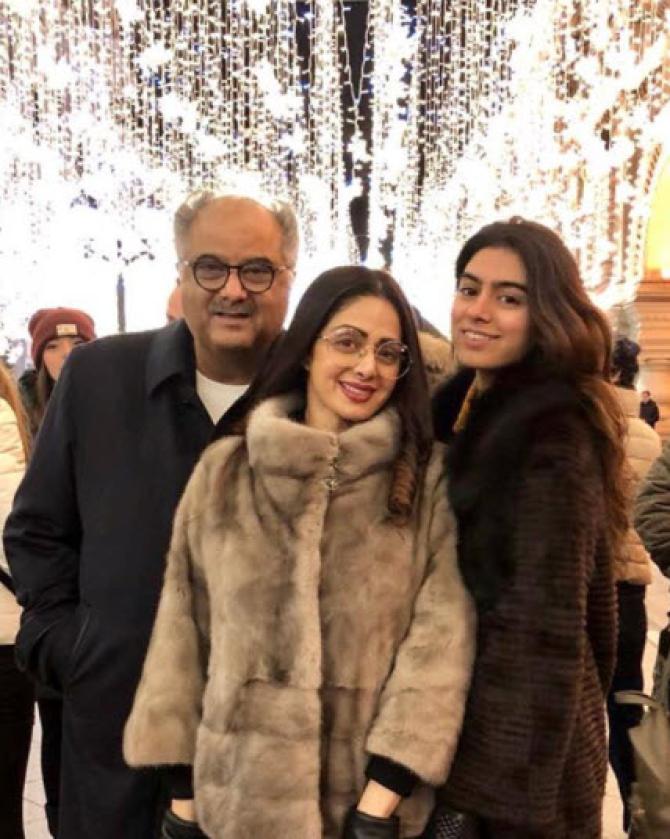