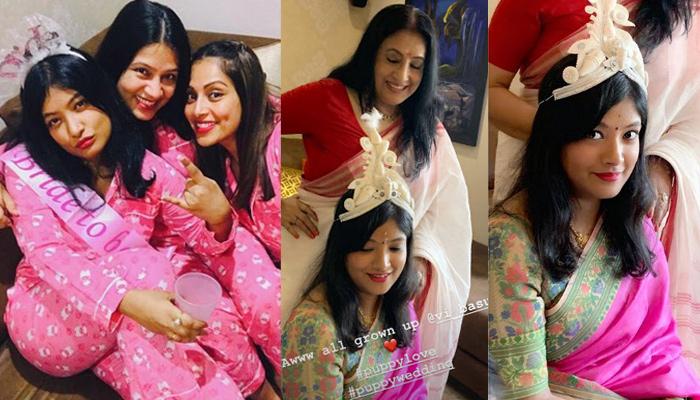 Rightly termed as one of the fun wedding rituals, Bengali weddings are super-fun to be a part of and witness. From a varied set of pre-wedding festivities, each comes with its own set of beliefs, constant ulu ulu coming out from the ladies of the house’s mouth to ward off all evils, funny jokes about the bride and groom being made by the younger lot of the house and not to forget, maach, mishti and more is what constitutes a Bengali wedding and Bipasha Basu’s house must be bustling with all of this at this point in time! (Do Read: Shilpa Shetty Kundra Dances Her Heart Out At 'Nanad' Reena's Mehendi And Sangeet Ceremony [VIDEO])

Bipasha’s younger sister, Vijayeta Basu is getting married to her longtime beau, Karan Talreja today and the wedding festivities have already begun in full swing for the superstar’s family! It was on February 17, 2019, that the Basu ladies had hosted a fun-filled, pink pyjama party for Vijayeta. Looking super-cute in a ‘bride-to-be’ sash and headgears, we could totally decipher the amount of fun that Vijayeta and Bipasha might have had at the bachelorette!

For her Bengali wedding, elder sister, Bipasha took to Instagram and shared the first picture of the bride-to-be, all decked-up for the first function. Known as the ‘Nandi Mukh’, where the elders of the house and the bride offer their prayers to the ancestors asking them to bless the bride and also seek permission for their marriage. Bipasha shared a picture of her little sister from the same festivity and wrote, “So my little one @vi_basu is taking baby steps towards her new adventure with @karantalreja #nandimukh #pujo #puppylove #puppywedding.” Jiju, Karan Singh Grover too, posted a similar picture with the words, “My gorgeous sister! A new journey starts today with the #nandipuja All the best! May the universe bless you with abundance and love and joy at every step of the way!” for his saali. Checkout the pictures below:

If she looks so stunning on her nandimukh, we can totally imagine how beautiful she will look with her wedding attire on! Speaking of her superstar sister, Bipasha, in a 2017 interview with Hindustan Times spoke about marriage, life and online dating apps. Speaking about using dating apps to find a love interest, the Jism star was quoted as saying, “Whatever I’ve heard about it has been from my sisters who’ve tried it, but it really hasn’t done much for them. I feel that love has the right time and if you’re supposed to meet someone you will and if you’re not it’s ok, life is not too bad being alone also.” (Must Read: Unseen Pictures Of Neeti Mohan And Nihaar Pandya From Their Varmala And Sindoor Ceremony)

She had further added, “But then everyone says that you should get married in time otherwise you’ll die alone and then you need to have kids also. I think people should wake up to the fact that you die alone. So this package deal of happiness that you’re trying to buy is quite sad, you need to be happy within first, and then only can you be happy with another person. As far as my views on marriage go, I was pretty much ok not marrying, but I met someone who wanted to get married and we were completely in sync; had spent a lot of time together- so it just happened. We didn’t plan it or anything.”

Last year, rumours of Bipasha’s pregnancy started doing rounds when the duo was clicked at a hospital. Her hubby Karan had then shared with the media, “I don't react to it anymore because if she is pregnant, then I would be the first person to know. But I think, what is happening these days is that everyone is running on speculations ke ab kya hai they love each other then it's been so much time together. How much can you say about that?”

When Bipasha was asked about when she wants to have a baby, she had shared with Hindustan Times, “We love babies. But both of us need more alone time together because once the baby arrives, it’s always only baby time. That’s the way we both think”. She further went on to add, “My mom is very keen to have a granddaughter soon”.

Recalling the first time she had ever dated, Bipasha had shared, “I’m pretty old school, and for the longest time I was dating only one person. It sounded like it was never ending. I haven’t had too many boyfriends, when I was single, it seemed like I was 16 again, because every single boy who was my friend or even who wasn’t asked me out. And I was actually scared and shy. But my friends were very protective of me; they rejected all the boys saying some were too short, too tall, bad teeth. They were really mean, but I avoided the whole dating game that time thanks to them.” (Next Read: 'Maine Pyar Kiya' Actress Bhagyashree Shares An Unseen Throwback Picture As A Bride From Her Wedding)

Well, it is amazing to note that both Bipasha and her sister have found the man of their dreams! Peeps, have you found yours? Let us know!