Bollywood actress, Bipasha Basu posted a cutesy picture with her father, Hirak Basu from her childhood days on Instagram. Take a look!

The mere thought of saying goodbye to his daughter with a person, who he barely knows or has probably just met, starts giving him restless nights. That’s how a father prepares for the marriage of his daughter and tries his best to keep those tears locked inside his eyes. The relationship between a father and a daughter is like a rollercoaster ride of emotions filled with laughter, teasing, and lots of madness. No matter, how strong a father is in front of the world, he becomes a sweet teddy bear in front of his daughter just to make her happy. That’s why people often say that it’s hard to find your father in your husband but at least you can try to find some traits. (Recommended Read: Taapsee Pannu Talks About Marriage And Admits She Can't Marry A Person, Whom Her Parents Don't Like)

One such daughter, who is extremely attached to her father like every daughter on the planet, is Bollywood actress and Bong babe, Bipasha Basu. The actress recently shared a beautiful picture from her childhood days on Instagram and it’s getting viral on the internet because of its cuteness. On May 11, 2020, Bipasha Basu took to her Instagram handle and treated her fans and followers with a rare picture from her childhood days with her father, Hirak Basu. In the monochrome picture, we can see Hirak Basu wearing a t-shirt and looking dapper in his clean-shaven look. However, it’s hard to take off our eyes from the beautiful baby girl, Bipasha, who is comfortably sitting in her father’s arms while flaunting her two ponytails. However, who would’ve thought that one day this little girl is going to mark her name in the history of the Indian film industry with her sheer brilliance and talent. Along with the rare picture, Bipasha wrote down a line about her father’s arms and it can be read as “In safe arms of my handsome papa #throwback #babydays.” Take a look. (Don’t Miss: Suhana Khan Is 'Kinda Mad' From Her 'Ma', Gauri Khan's Reaction To Her Complain Is Every Mother Ever) Over the years, we have heard a lot of good things from Bipasha about her father, Hirak Basu and there’s no denying the fact that they’re simply like two best friends. However, if you’re thinking that Hirak Basu is cool with his daughter only, then you’ll be amazed to know that he shares a close bond with his son-in-law, Karan Singh Grover. In an interview with Pinkvilla, Karan Singh Grover had revealed the advice he had received from his father-in-law about how to handle a Bengali woman. The actor had recalled, “Hamara dono biwi na… fire hai! Tum usske saath thoda thanda rehna. Tum water sign na, aag ke upar paani daal dena. No problem. One day, I saw Bipasha and her mom fighting and it was like this tandaav happening! Her dad and I kept looking at each other. His sarcasm and humour is something else.” It was on April 30, 2016, when Bipasha Basu had tied the knot with her Alone co-star and beau, Karan Singh Grover after a long dating period. For her wedding day, Bipasha had chosen a traditional red Sabyasachi ensemble which she had accentuated with a heavy choker neckpiece, a maatha patti, and a nath. Bipasha’s bridal look was simply elegance personified and the decision of opting for the classic red colour had made it even more drool-worthy for everyone. In an interview with The Economic Times in 2014, Bipasha had expressed her wish to be dressed as a Bengali bride and had said, "I am from Bengal and when I get married, I will want a traditional Bengali bridal look. I want it to be very extravagant as well." And her dream had finally got fulfilled on April 30, 2016! Take a look. (Also Read: Himanshi Khurana Shares An Intimate Video With Beau, Asim Riaz, Cannot Take Hands Off Each Other) 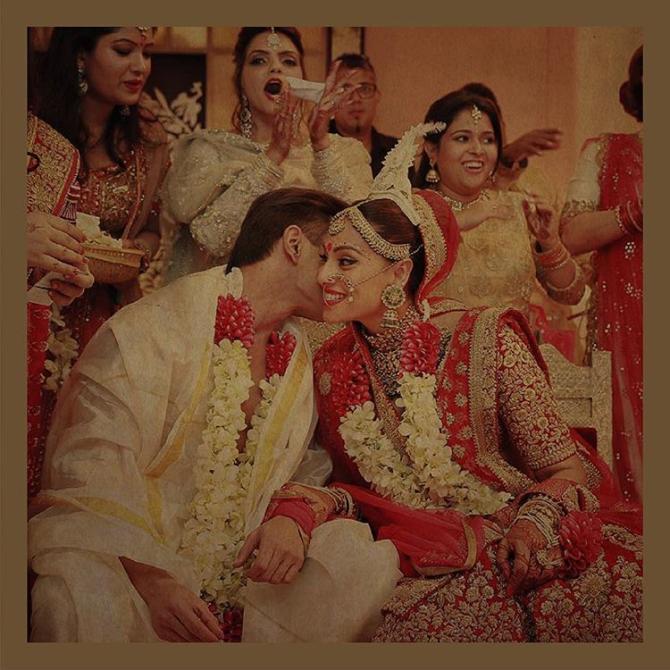 Do you love the throwback picture of Bipasha with her dad? Let us know!