During a promotional interview of their web series, 'Dangerous', Karan Singh Grover and Bipasha Basu Singh Grover were questioned about their plans to embrace parenthood.

There isn’t any couple in the B-town, who hasn’t been scrutinised for the next ‘update’ of their lives post marriage, i.e., parenthood. As soon as a couple ties the knot, media and fans probe them when will they plan a family and welcome a child in their lives. Such has been the conjecture-filled journey of every celeb couple in the entertainment industry and the ‘Monkey Couple’ a.k.a., Bipasha Basu Singh Grover and Karan Singh Grover are no different. It was in 2016 when the Bong beauty, Bipasha had added the surname Singh Grover when she had walked down the aisle to marry the love of her life, Karan. (Also Read: Karan Patel Wishes His 'Jaan', Ankita Bhargava On Her 39th Birthday, Expresses What She Means To Him)

It has been four years since Bipasha Basu Singh Grover and Karan Singh Grover had become each other’s forever and no year has passed by when the couple wasn’t speculated to be pregnant. For instance, on Diwali 2019, when Karan and Bipasha had attended producer, Ramesh Taurani’s Diwali bash, the latter had posed for the shutterbugs with her dupatta draped in a way that had covered her body. While it was her lehenga that was a little heavy which had made it look like a slight bump on her belly, but it had given her fans an impetus to speculate that their favourite jodi might soon be embracing parenthood. Karan Singh Grover and Bipasha Basu Singh Grover had met and fallen in love on the sets of their film, Alone and after five years, the lovebirds have collaborated for a web series, Dangerous. During the promotional interview with the Navbharat Times, Karan and Bipasha were questioned about their plans to embrace parenthood. Bipasha replied, “Bhagwaan jo chaahega wo ho jayega.” Bipasha added that even if the natural way of embracing parenthood doesn’t work, then they will happily adopt. Bipasha said, “And even if the child didn’t happen, it is okay. There are many children in our country, we can take care of them as well, we are fortunate. There are so many children in the country, who do not get facilities, it is also our responsibility to provide facilities to those children. Let’s see what happens in the future.” (Also Read: Kareena Kapoor's Adorable Video Capturing 50 Years Of Saif Ali Khan's Life Is Pure Couple Goals) Bipasha Basu and Karan Singh Grover met, acted, fell in love and soon after, got married. The couple had celebrated their fourth anniversary and have been enjoying their happily ever after since 2016. And all their fans are looking forward to the next ‘big update’ in their lives and hence, the speculations. Rumours of Bipasha’s pregnancy had started doing rounds in 2018 when she was captured by the paparazzi holding a bag in front of her. Reacting to it, Bipasha had tweeted, "Amused yet again. I kept a bag on my lap while getting into my car and certain media ppl started my pregnancy speculation again. Guys i am not pregnant. Kinda getting irritating. Stay calm... it will happen only when we w ant it." Later in an interview with Pinkvilla, her hubby, Karan Singh Grover had reacted to the pregnancy speculations that surround them every now and then. Karan had said, “I don't react to it anymore because if she is pregnant, then I would be the first person to know. But I think, what is happening these days is that everyone is running on speculations ke ab kya hai they love each other then it's been so much time together. How much can you say about that?” When Bipasha Basu Singh Grover was asked about when she wants to have a baby, she had shared with the Hindustan Times, “We love babies. But both of us need more alone time together because once the baby arrives, it’s always only baby time. That’s the way we both think.” She had further gone on to add, “My mom is very keen to have a granddaughter soon.” (Also Read: Bipasha Basu Reminisces Her New Year's Proposal Planned By Her Hubby, Karan Singh Grover) 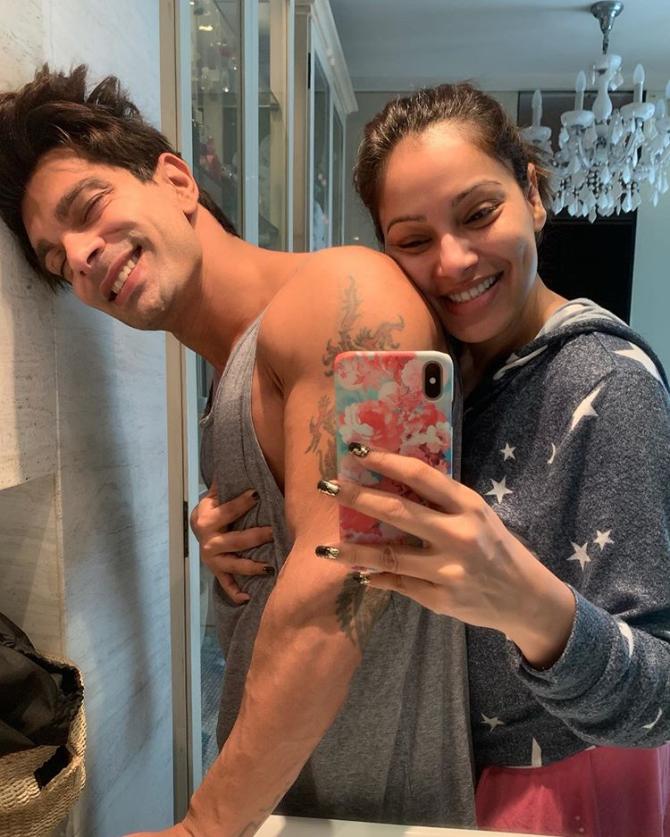