Bhagyashree took a journey down her memory lane and shared a lovely picture with her 'darling hubby', Himalay. Check out her throwback picture!

A star's life is always on the media radar, and their fans wants to know everything about their life behind the camera. While it may become a status symbol for some stars, some like to keep their personal lives private. And one actress, who has managed to stay away from the constant media glare and rumours is, none other than '90s girl-next-door, Bhagyashree. The gorgeous star is still popular for her film, Maine Pyaar Kiya. However, not many know that she had rejected all the roles that had come her way just because she had decided to be 'missus' of her 'mister right', Himalay Dasani. (Recommend Read: Shah Rukh Khan And Wife, Gauri Khan Twin In KKR Masks As They Appear For IPL Match With Aryan Khan)

For all of us, the meaning of success is different. For some it might be achieving recognisation at their work, for others, it might be owning a luxury car. And for Bhagyashree, her success was in seeing her 'happily ever after' with the love of her life. After so many years of martial bliss, Bhagyashree still never fails to shower her love on her hubby, Himalay. 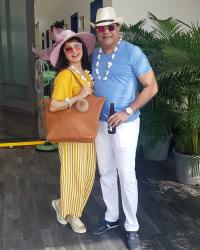 On October 1, 2020, Bhagyashree took to her Instagram handle and shared a throwback picture with her hubby. In the picture, we can see the gorgeous couple dancing their hearts out on the dance floor. Alongside it, Bhagyashree wrote, "#onceuponatime I finally got him down on his knees. Itne thumke maare ki dil ghayal hona hi tha. Share with me some interesting incidents when you managed to get your hubby floored! Let's have a few laughs." Check it out below:

Talking about Bhagyashree and Himalay's love story, in an interview with Humans of Bombay, the actress had opened up on the same. She had shared, "We went to school together — he was the naughtiest kid in class and I was always the class monitor. We would fight all the time and the rest of the class would have a blast! We were like Yin and Yang — the more we fought, the more it became clear that we couldn’t be apart. We never dated though…he never even told me how he felt until the last day of school. He said, ‘I have to tell you something’ and then for one week he kept trying to say it but would always back out. Finally, I went upto him and said, ‘look, just say it…I’m sure the answer will be positive’ and that’s when he told me he liked me." (Also Read: Madhuri Dixit Nene's 'Then And Now' Picture With Elder Son, Arin Nene Proves Her Beauty Is Eternal) 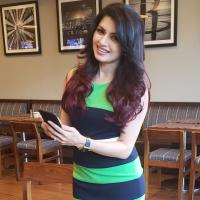 She had further added, "I come from a very conservative family, so even after that while we were in college, we would barely meet or talk on the phone. When I told my parents about him, they thought we were too young to decide something like this, and I believed as well that if he really loved me, we should be apart for some time — he should explore, know that I’m the one and then we could be together. So we did break up when he went away to the US to study, and that’s when I signed Maine Pyar Kiya." 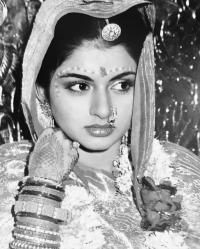 Bhagyashree had revealed how she realised that Himalay was the right man for her, "Before signing the film, while he was still in the States I went and met his parents to ask them if they were okay with me getting into films…we weren’t even together at that point, but I guess somewhere I knew that we would in the future. They said that they had no problems…and I began shooting. When he came back home during the course of the shooting, we both knew that we wanted to be together, but my parents still wouldn’t allow us to meet or speak on the phone…so I decided to speak to them. I told them that seeing him made me happy, that I couldn't be without him, but they were still adamantly against our relationship. I knew then that there wasn’t any other way."  (Don't Miss: Anita Hassanandani Asks For A Diamond From Hubby, Rohit Reddy, His Reply Is Every Husband Ever)

Well, we love the romantic picture of Bhagyashree! One of the most beautiful actresses of her generation and with so much acting potential in her, many people will argue that her decision of waving goodbye to Bollywood was a heartbreaking one. But Bhagyashree had revealed it time and again in many interviews that she holds no regrets on