Anita Hassanandani asked for a diamond from her husband, Rohit Reddy. Scroll down to know how did he respond!

Some time ago, a joke had gone viral on social media, which said, in the marriage ceremony, the ritual 'maang bharna' is analogous to the husband's condition in married life. For he always has to fulfil the demands ('maang bharna') of his wife! And guess what, celebrity couples are no different. Scroll down to know about one such couple! (Recommended Read: Jay Bhanushali Shares An Adorable Video Of Baby Tara Enjoying A Walk On The Grass, Says She Loves It)

Anita Hassanandani took to her IG handle and posted a picture of a beautiful bouquet of roses sent to her by her husband, Rohit Reddy. Giving his present a quirky touch, Anita wrote, "I am gonna kill this guy who sends me flowers and not diamonds @rohitreddygoa. #anniversary month" atop it. Giving a hilarious response to her demand, Anita's husband, Rohit reposted her story and put a diamond emoji over it and wrote, "Ye lo." We guess, with this, Rohit Reddy has won the 'husband of the year' title.

Likewise, On September 25, 2020, Anita had shared a selfie with a bunch of flowers. The actress had revealed in her post that the flowers were given to her by her hubby, Rohit. She had penned a funny shayari and it could be read as "A "fool" gave me "phool" cos he made a "bhool". And my bad shayari rules."

According to the reports of IDiva, in a media interaction, Anita had talked about the moment she had realised that Rohit is the man of her life, and had revealed, "I used to love drinking in my younger days. This one night I went overboard and got into a fight with Rohit. It was all my mistake. Woke up the next day, apologised to him saying 'I'm sorry Rohit I'll give up drinking if you want'. He replied saying, 'No you don't have to give up on anything for me. Just try staying in control. You are a public figure, you have to be careful,' – and that was the moment I knew he's my man! Who loves me for ME; with all the flaws? He didn't want me to change a thing for him. It's been 6 years and the only change in me is that I'm a better, a more positive person. Not only that, I'm more successful than I used to be!" (Also Read: Kareena Kapoor Khan Remembers Her Grandmother, Krishna Raj Kapoor On Her Second Death Anniversary)

On September 21, 2020, the beautiful couple had recreated a very special moment of their life and had shared it with their fans on their respective IG handles. In the video, the two could be seen accepting each other despite all flaws as in the fun video, a trick had been played on their eye movement. While Anita had captioned the video as "Made for each other @rohitreddygoa", Rohit had captioned it as "When our eyes locked for the first time!"

On August 30, 2020, Anita had shared a mushy picture with Rohit from one of their vacations. Anita and Rohit had posed together for the camera, and the actress had captioned it as "Looking at 2021! Super Excited." The caption had become a hint for the fans that good news is on its way, and they had started sending congratulatory wishes. Later, Rohit had opened up on the same and had commented on the reason for their happiness, "Areee, 2021 mein Vaccine aa jayage na! That is why!" On this, Anita had written, "Good one." (Don't Miss: Shah Rukh Khan And Wife, Gauri Khan Twin In KKR Masks As They Appear For IPL Match With Aryan Khan) 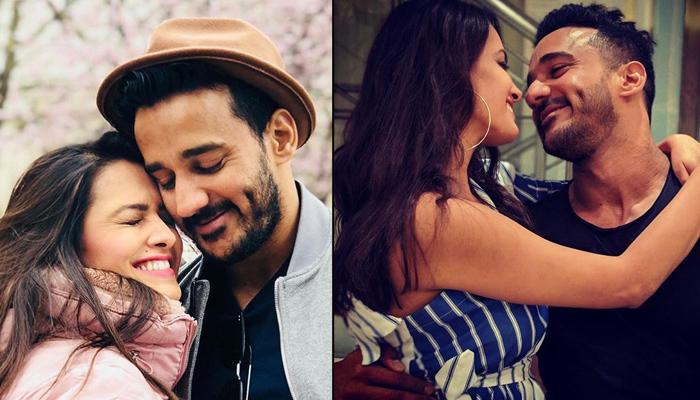 No one can beat these two in the PDA game. One glance at their social media handles and you’ll feel like you are watching Bollywood movie stills. Anita Hassanandani and Rohit Reddy show us exactly what being crazy in love means. From their endearing social media PDAs to sharing some filmy